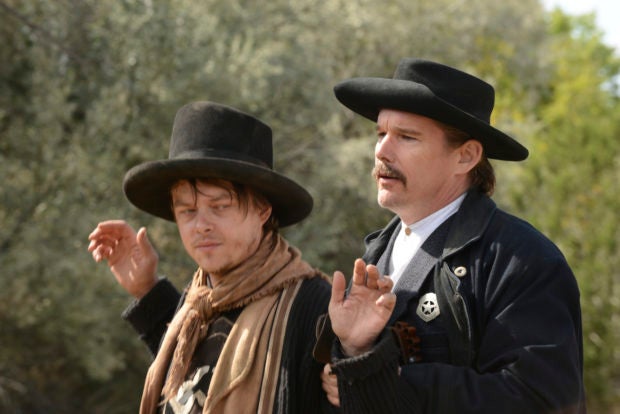 This image released by Lionsgate shows Dane DeHaan, left, and Ethan Hawke in a scene from “The Kid”. Image: Lionsgate via AP

In fact, can we talk about Hawke for a minute? The veteran actor is having quite the run these days, on screen and stage. Many feel he was unconscionably robbed of an Oscar nod for “First Reformed”, and he’s delivering a superb performance in “True West”. He’s also the most substantial reason to see “The Kid”, a nice idea that is, alas, thinly executed.

The “kid” in the title is not, actually, Billy the Kid, the renowned outlaw whose story loosely inspires the film. It’s a 13-year-old kid named Rio (Jake Schur), who, as we begin, witnesses his mother being beaten to death by his evil father. Rio manages to shoot and kill his dad — only to face the wrath of his vengeful uncle (Chris Pratt, in true villain mode). Rio and his older sister, Sara (Leila George) just barely escape into the night.

On the run, with only the vague plan of finding their mother’s friend in Santa Fe (the action is in late 19th-century New Mexico), the pair take refuge in an abandoned shack, where they run smack into Billy (DeHaan) and his companions. Billy’s on the run, his pursuer none other than Pat Garrett (Hawke), the new sheriff in Lincoln County, a gruff but philosophical law-and-order man whose mission is to bring Billy to justice.

When Garrett and his men quickly find and capture Billy, Rio and his sister — lying about the reason for their journey — hitch a ride with the group to Santa Fe. Along the way, Rio comes to admire Billy, portrayed by DeHaan as roguish and charming, and even helps him try to break free. Arriving in Santa Fe, Rio and Sara immediately run off — straight into a trap laid by evil Uncle Grant, who kidnaps Sara and warns Rio that if he pursues them, both siblings will die.

Now Rio needs to make a choice: who’s more likely to help him rescue Sara, the charismatic outlaw or the upstanding sheriff? More profoundly, will Rio become a bad good guy or a good guy?

The teen becomes fast friends with Billy, but if you know your history, you’ll know that Billy, also named William H. Bonney, did not eventually die of natural causes (though in this depiction of the West, death by bullet does seem to be the natural order of things.)

In any case, Schur (son of producer Jordan Schur) has a sweet, soulful face but the script gives him little depth to work with. The character of Sara fares even worse; women in this world seem to exist solely to be a) pretty, b) wronged, and c) rescued.

As for Billy and Pat Garrett, both roles have been played by dozens of actors over the years. DeHaan gives Billy an appealingly impish spin, though he seems a bit old for the part. Pratt, covered with facial hair, revels in evil vibes. Hawke takes a fairly one-dimensional character and gives it an intelligent and shaded performance. It’s worth noting that this isn’t the team’s first, er, rodeo: Hawke, Pratt and D’Onofrio appeared together in the 2016 Western “The Magnificent Seven”.

“Let’s see what you do next, kid,” Hawke’s Garrett tells Rio at one point, but honestly, we’re more curious about Hawke’s next move at a fertile moment in his career. Check out “The Kid” for some pleasant entertainment, but if you really want to see this actor firing on all cylinders, giddy-up to Broadway before “True West” closes March 17.

“The Kid”, a Lionsgate release, is rated R by the Motion Picture Association of America “for violence and language.” Running time: 99 minutes. Two stars out of four. CC