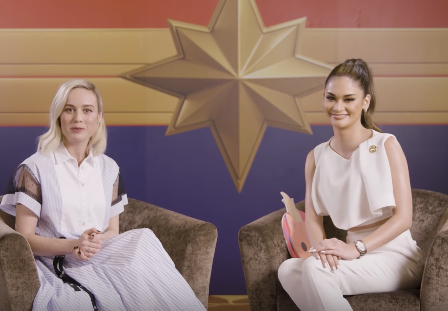 Miss Universe 2015 Pia Wurtzbach sat down with Academy Award-winning actress Brie Larson for an interview to mark the coming of “Captain Marvel” in the Philippines.

The interview was shared on Marvel Philippines’ YouTube account on March 5, and showed the two, both dressed in white, talk about Larson’s role as one of the most powerful superheroes in the Marvel Cinematic Universe.

Before meeting Larson, Wurtzbach was shown preparing for the said interview, and admitted before the camera that she was a jumble of nerves.

“I’m nervous, excited, a little bit of everything, but I can’t wait to meet her,” Wurtzbach said. “I look so calm right now, but I’m nervous, I’m so nervous.”

Wurtzbach, however, held her own when she came face to face with Larson, who was calm and collected during the interview. Wurtzbach asked the Hollywood star how it felt like to play Captain Marvel.

“How does it feel to play the most powerful superhero in the Marvel Cinematic Universe and to be a part of that bigger picture?” asked Wurtzbach.

As per Larson, the feeling was nothing short of surreal.

“It still hasn’t hit me yet,” she admitted. “I just care so much about female representation and showing female complexity on screen and I was just honored to be considered for this role and to be joining a huge family.”

Bagging the role meant a lot to Larson, who further shared to Wurtzbach that she spent a lot of thinking about it to ensure she gave service to her role as Captain Marvel.

“I couldn’t deny the fact that it was just such a powerful opportunity and I’ve been noticing it even now, just at the beginning of the press tour and I see how much the symbol, even just the star, means to people,” Larson told Wurtzbach.

Wurtzbach, meanwhile, praised Larson for looking the part of one of the strongest female superheroes in Marvel. “I know that you went through a process of training and preparation,” she said. “I even saw the video of you trying to push the jeepney from behind you.”

Larson apparently did not know how to do a push-up before shooting for the film.

“And by the end of it I was able to do weighted push-ups, pull-ups, things that I never thought I would ever be able to do in my life,” she said.

The interview was a success and Wurtzbach, who was nervous at first, seemed unable to believe she got to meet and interview Larson.

“I just want to pinch myself, she is so so so cool, so gorgeous,” Wurtzbach raved in the end. “I can’t believe that just happened, I can’t wait to see her in action.”

Wurtzbach also took to Instagram on the same day where she shared a photo of her holding a Captain Marvel figure in her hands. She tagged her meeting with Larson as a “kilig moment.”

“Finally got my hands on Captain Marvel,” she said. “It was such a kilig moment meeting @brielarson!”