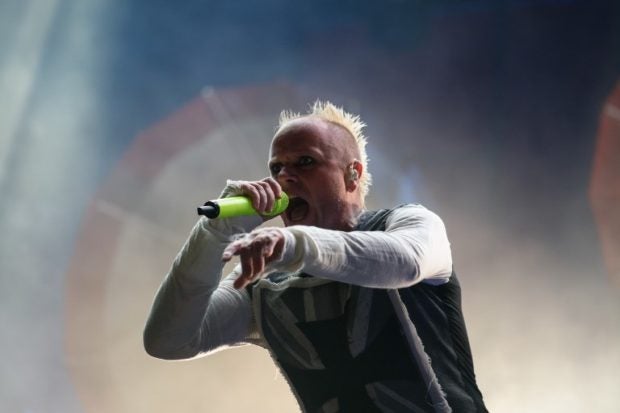 In this file photo taken on August 09, 2015 Keith Flint of The Prodigy, performs at the 10th annual Incheon Pentaport Rock Festival in Incheon, west of Seoul on Ausust 9, 2015. AFP

LONDON, United Kingdom — Keith Flint, the singer and iconic frontman of British rave scene band The Prodigy, has died at the age of 49, the electronic pop group said.

Police said they were not treating the death as suspicious after finding his body on Monday in Essex, northeast of London.

“We attended and, sadly, a 49-year-old man was pronounced dead at the scene. His next of kin have been informed,” Essex Police told AFP.

“The death is not being treated as suspicious and a file will be prepared for the coroner.”

Heavily tattooed and topped with a bleached mohawk, Flint helped turn The Prodigy into one of the most influential groups to emerge from the underground rave scene.

Their biggest hits included “Firestarter” and “Smack My Bitch Up”, which merged intense dance beats with punk elements.

“There was a real determination for it to have zero compromise,” Flint told AFP in 2015.

“There really needed to be an antidote to the DJ scene, which made it quite brutal.” /ee

ADVERTISEMENT
Read Next
Steven Spielberg’s push against Netflix at the Oscars hits a nerve
EDITORS' PICK
Been there, done that but what’s the difference between MECQ and GCQ?
Smart 5G goes live
A gem of a residence in the new normal
Water remains our saving grace right now
BREAKING: 3,226 latest COVID-19 cases bring PH’s total to 106,330
PNP: Checkpoints back in MECQ areas
MOST READ
MECQ guidelines in infographics
Health workers decry colleague’s death from virus; accuse gov’t of neglect
Lacson takes up cudgels for health workers ‘threatened’ by Duterte
MECQ in NCR, other areas: Mass transportation suspended, quarantine pass required anew
Don't miss out on the latest news and information.