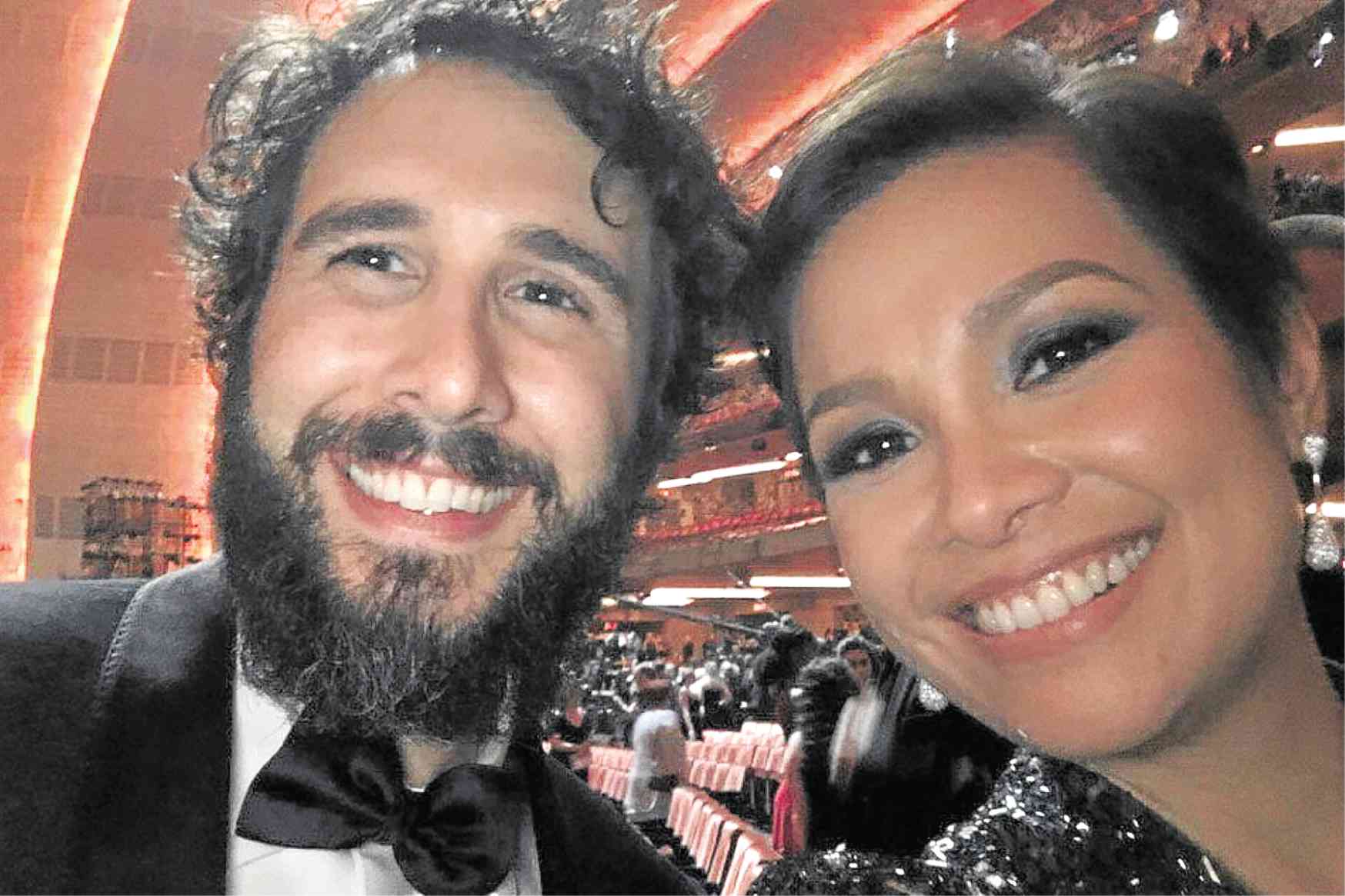 The author (right) with Josh Groban

As of this writing, it’s been over six weeks since my accident on the slopes. Physical therapy has begun in earnest, and I’ve now regained a good amount of the flexibility I lost over the course of my leg being immobilized.

For the first four weeks since getting injured, I’ve spent much of my days and nights doing almost nothing (save for needlework and Netflix binges), but now that rehab has begun, my body is starting its return to what was once my normal.

Unfortunately, there have been postponements and cancellations of scheduled concerts, many of which have been moved to later dates (please visit LeaSalonga.com for announcements).

But there was one gig that remained on my calendar with my doctor’s blessing since it didn’t involve overseas travel: being the special guest of the magnificent Josh Groban for the Manila stop of his “Bridges” concert tour.

I was able to sing two duets with him, and judging from the audience reaction and the numerous videos that popped up on YouTube soon after, I guess we did all right.

What I had taken for granted was how easily mobile I was, and normally am, and how being disabled makes those things much more appreciated. It’s the small things that, once taken away, makes living that much more challenging.

My mother’s phone conversations with Ovation Productions’ Renen and Bogie de Guia now included concessions we never used to ask for, such as: “Is the venue wheelchair accessible?” “How will she get onstage? Will there be a ramp or will she need to be carried?” And on our end, “What are you going to wear? Because of your inactivity, will your clothes still fit?”

Thankfully, I didn’t put on a ton of weight despite the lack of physical activity. I picked a royal blue Rajo Laurel gown and a pair of silver sneakers, with Mia Florencio furnishing my baubles.

Thank goodness for a sound check and rehearsal in the afternoon, so that Josh and I could figure out our duets (“All I Ask of You” from “The Phantom of the Opera,” and “The Prayer”) with musical director Tariqh Akoni. That was the easy part. More difficult was everything else.

Yes, thankfully, a wide ramp was constructed on stage right for access to and from the stage. My chair was pushed by one of Josh’s stronger crew members, so I knew I’d be in good hands.

I was also thankful that SM Mall of Asia Arena has easy access to the backstage area for my chair … ramps from the basement parking area to the elevator bay, elevators leading right to the dressing room area, and no steep flights of stairs. Had this been another theater, my mind would’ve been in panic mode.

Despite the little challenges of the day, the concert itself was such a blast, and I was just the happiest camper up on that stage. I was reminded of the joy that singing brought to my life.

Due to the forced hiatus, I’ve gained greater appreciation for what I do, as well as a deeper love and respect for the craft. One truly doesn’t know what one has until it’s taken away.

Happy birthday to me, indeed.

And now, until it’s time for me to head off to the US for my next concert tour, it’s back to physical therapy. Patience and faith are required, as well as focus and determination.

I’m thankful the therapists in charge of my rehabilitation are equal parts patient, kind and encouraging, which only push me to do the best I can to return to fighting form.