Fil-Am Angelica Hale bows out of ‘America’s Got Talent: The Champions’ 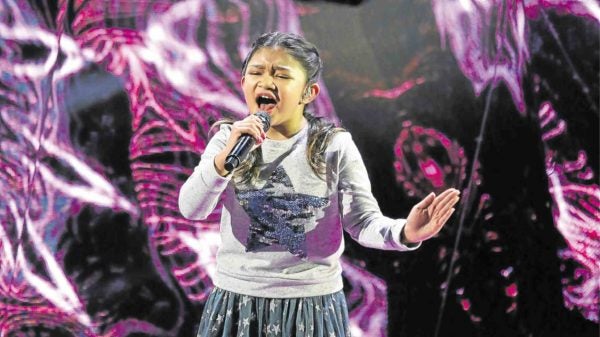 MANILA, Philippines – Filipino-American singer Angelica Hale failed to advance to the Top 5 round of “America’s Got Talent: The Champions” on Monday (Tuesday in the Philippines) but remained optimistic and upbeat.

“Well guys, I didn’t make it this time, but that’s ok! This was an amazingly fun run & I’m so happy to have made it this far!”  the 11-year-old singer wrote in a tweet.

“So thankful for all the fans I picked up along the way! U guys are the best & I consider myself the luckiest girl in the world,” Hale added.

Other finalists of “AGT The Champions” were Kseniya Simonova of “Ukraine’s Got Talent,” singer Cristina Ramos of “Spain’s Got Talent” and finalist of “AGT” Season 12 comedian Preacher Lawson.

Hale made history as the first contestant of “AGT” to earn two Golden Buzzer wins.

She first joined “America’s Got Talent” in 2017 where she received her first Golden Buzzer and finished second. / gsg

Read Next
LOOK: Jodi Sta. Maria experiences island life in Mozambique
EDITORS' PICK
Beyond water service: Maynilad builds massive infrastructure projects to clean up Metro Manila waterways
Timeless Elegance in the Philippines’ Most Distinguished Home Kitchens
SM continues to send relief assistance to remote towns in Batangas
Bato on ending VFA with US: ‘I don’t deserve this bargain but it’s not all about me’
Singapore confirms first case of novel coronavirus
Group slams Duterte: Terminate VFA because of sovereignty issues, not because of Bato
MOST READ
Part of Aurora Boulevard in Cubao closed from Jan. 25 – Feb. 1
Duterte to decline invitation to attend US-Asean summit
Sam Heughan on turning 40, new ‘Outlander’ season, playing Paul Newman in film
Duterte threatens to scrap VFA if US doesn’t rectify Bato’s visa cancellation
Follow @KAguilarINQ on Twitter
Don't miss out on the latest news and information.