“Dating Around” examines love and its vagaries.

Two shows that will be streamed on Netflix starting tomorrow will vie for viewers’ attention tackling themes that examine not just romance and its vagaries (“Dating Around”), but also the kind of love that heals as much as it turns people into the best versions of themselves (“Ken Jeong: You Complete Me, Ho”).

“Dating Around” is a six-part series that takes a compelling look at the complexities of dating in the age of the internet. Each episode of the show follows a single guy or gal who goes on first five dates before picking a candidate to his/her liking.

That’s easier said than done because, while a guy could end up picking someone with his preferred attributes, he could quickly lose interest as soon as the searchee opens his or her mouth. This proves why long-lasting relationships rely on chemistry or “suntok-sa-buwan” serendipity more than mere physical compatibility.

The show isn’t just about straight easy-on-the-eye searchers looking for attractive mates they can take home to momma, as with the case of handsome 27-year-old real estate agent Luke (Episode 1), or pretty flight attendant-turned-data scientist Sarah (Episode 5) who always falls for the wrong guys. After all, falling in love is an equal-opportunity endeavor that is just as tricky as falling out of it.

The second episode follows 36-year-old divorcée Gurky, a French-born, MBA-educated jeweler of Punjabi descent, who finds herself quarreling with one of her dates when he likens India’s arranged marriages to “living life backwards.”

Result: He walks out on her during a getting-to-know-you date that ends abruptly, even before it could heat up!

Lex gets to go out with a partygoing skinhead, a songwriter wannabe with messy eating habits, a musical theater actor who has acted in “Seussical” and moonlights as Queer Wang on the drag scene, a nice-looking chap who stalks his prospects on Grindr, and a bearded, 6’4” tall ex-football player who sees himself as a “butch queen.”

The series is as much for young viewers as it is for the young at heart: Episode 4 has one of the season’s more entertaining scenes as it follows retiree Leonard, a former litigation lawyer, and his search for a woman to keep him company in  his twilight years.

Leonard has five choices, but he singles out two particularly interesting women: Lauren is a feisty widow who is made more appealing by her Italian temperament.

After their first dinner, she refused Leonard’s offer for a nightcap because she said she needed to sleep.

Of her three previous marriages, Lauren says, “All my ex-husbands are still alive. I didn’t kill them; they didn’t piss me off that much.”

Lauren’s short-haired rival, Gloria, is also one tough cookie. She admits that she dated a guy while her former husband was in his sick bed. Before their introductory date ended, she was bold enough to ask Leonard if he liked her well enough to go on a second date with her.

‘You Complete Me, Ho’

Actor-doctor Ken Jeong’s first standup special on Netflix, “You Complete Me, Ho,” sets itself apart from other comedy shows because it banks on a potentially tragic personal story that looms large not just in the comedian’s repertoire, but also in his decision to leave his successful medical practice for acting.

His wife of 16 years, Tran Ho, a US-based physician of Vietnamese descent, was diagnosed with cancer just as Ken was about to shoot Todd Phillips’ blockbuster franchise “The Hangover,” the movie that catapulted the self-referencing comedian to movie stardom.

In the standup show, Ken demonstrates his comedic timing and mettle as he cyclically pokes fun at his “little weiner” (“I’m a grower, not a shower; the smaller the penis, the bigger the box office”), which was on proud display in “Hangover.”

When Ken decided to do the full Monty in the comedy flick, his wife predicted that it would become the feel-good movie of the summer, because “every guy will go home feeling good about himself.”

He has since appeared in movies like “Crazy Rich Asians” and “Knocked Up” (his first film), and in TV shows like “Community” and “Dr. Ken.” 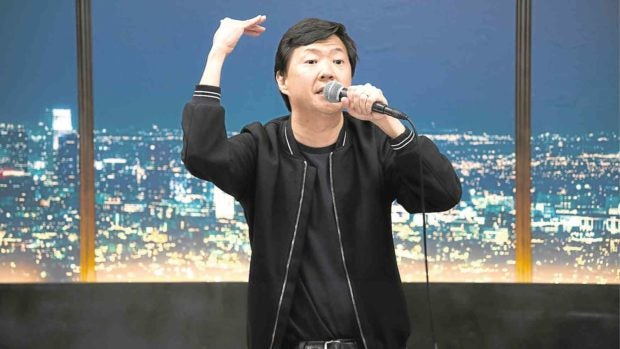 Actor-doctor Ken Jeong in “You Complete Me, Ho”

What is Ken’s alternative title to “Crazy Rich Asians,” the groundbreaking film with an all-Asian cast that topped the box office for three consecutive weeks? “Yellow Panther.”

There are also a lot of situational gags about the medical profession. During a medical emergency on a plane, people wouldn’t even acknowledge Ken’s offer for first aid because they thought he was merely dispensing a tension-leavening joke. In another standup show, he had to cut his comedy routine short when he saw an audience member having a seizure.

Ken is just as effective when he isn’t referencing his medical practitioner past, like when he delivers his impressions of Kevin Hart and Tom Hanks.

His anecdotes about US presidents are also laugh-out-loud funny. Of Bill Clinton: “He has the highest IQ of any modern-day president. He’s a political genius who is so persuasive and convincing that I would … ” OK, just watch the show to find out how that line ends.

The zany comic also recalls an embarrassing moment involving Barack Obama (“He’s a great guy, he’s not a racist, and he rarely tweets … ”), then explains why he’s scared of Donald Trump (“Even true-blue racists are saying to him, “Dude, tone it down!”

But Ken truly comes into his own when he recalls the difficulty of handling his cancer-stricken wife’s life-or-death situation, after she was diagnosed with Stage 3 breast cancer with a 23-percent possibility of survival.

“It was a full-circle moment for me,” he shares. “Now, my wife has been cancer-free for 10 years. But do you know that two days before her chemotherapy was supposed to begin, she took her eight-hour standardized [specialty] board exam—and passed it with flying colors?”

“Todd Phillips saved my life. He got me out of depression,” the comedian muses with gratitude in his voice. “On the last day of filming ‘Hangover,’ Bradley (Cooper, his costar) drove me all the way from Vegas to LA to see Tran.”

Which is why Ken sees no reason why people should allow their problems to get the better of them. We should always seize the opportunities presented to us, he winkingly says: “Like my dick, life is short. So, take chances!”