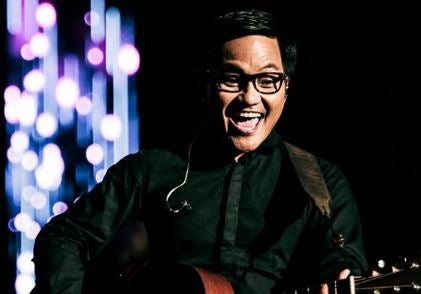 Dancel posted on Sunday a video of himself jamming to Ben&Ben’s “Maybe The Night.”

“Hi @BenAndBenMusic im a huge fan. Can i be your front act please thanks,” Dancel wrote.

He also tagged the two frontmen of Ben&Ben twins Paolo and Miguel Guico as well as the group’s keyboardist Pat Lasaten.

The group quickly responded using their official Twitter account and said it was their dream to collaborate with Dancel.

“Hello Sir @ebedancel may we have the honor of collaborating with u on a song it is a dream of ours pls,” the tweet read.

Ben&Ben is a nine-member group known for their hits such as “Ride Home,” “Leaves,” and the critically acclaimed “Kathang Isip.”

They are set to release a new single on Valentine’s Day titled “Mitsa” or candle wick.

Meanwhile, Dancel was the frontman of rock band Sugarfree which disbanded in 2011. He is the voice behind the hit songs “Bawat Daan,” “Dapit Hapon,” among others. /cbb