Claudia Cardinale talks about being ‘stupid’ for turning down Marlon Brando 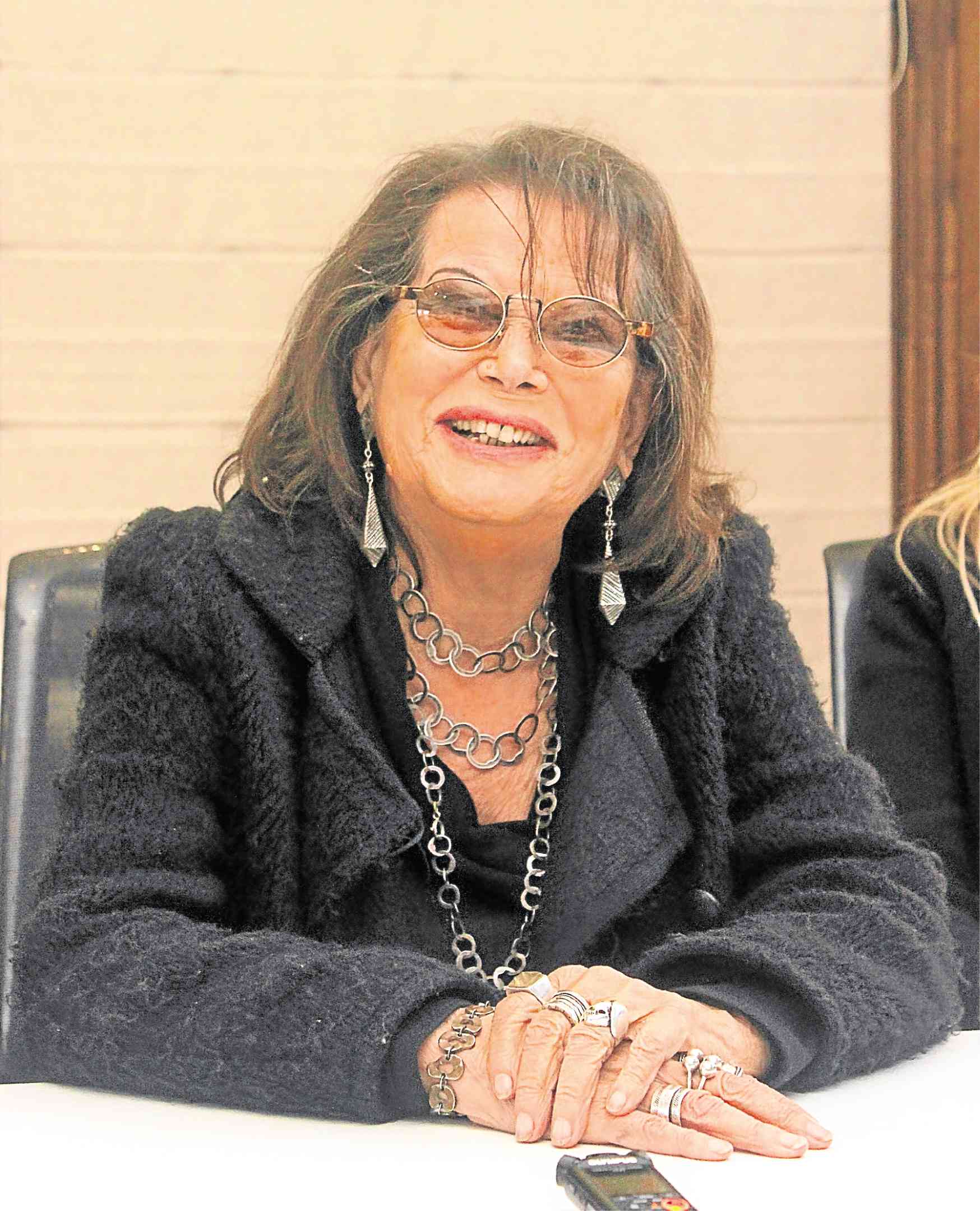 LOS ANGELES—When you interview a screen goddess like Claudia Cardinale, who starred in some of the most memorable films, from Fellini’s “8 ½” to Werner Herzog’s “Fitzcarraldo,” you are bound to hear fascinating stories.

After all, this was an actress who worked with some of the finest filmmakers and the handsomest actors in the ’60s and ’70s, including Marlon Brando, Alain Delon, Marcello Mastroianni and Jean-Paul Belmondo.

The sultry Tunisia-born actress, often described as a “sex symbol,” arrived in our interview wearing sunglasses, which she later took off, an all-black ensemble and lots of jewelry on her hands and wrists.

Cardinale, named in 2011 by the Los Angeles Times as among the 50 most beautiful women in film history, came with Claudia Squitieri, her daughter with Italian filmmaker Pasquale Squitieri. The younger Claudia translated the answers of her mom, when she spoke in French and Italian.

“I want to tell you something very interesting,” Cardinale said at one point in this chat in West Hollywood when the topic veered toward horoscope signs. She is an Aries (born on April 15). “I was doing a film in America, in New York. Suddenly, knock, knock, knock. It was Marlon Brando. He said, ‘I’m an Aries, like you.’ Then he said, ‘We have to make love.’ I said, ‘No!’ But when I closed the door, I said, ‘I’m stupid!’”

Asked if she had a chance later to talk about that incident with Marlon, Cardinale laughed and answered, “No, because I’m stupid!”

“I did four movies with Marcello (Mastroianni),” she shared. “But I don’t know if I can say it. No, it’s too much. He was in love with me. But I never accepted.”

“She refused everyone,” volunteered Squitieri, who often laughed with her mom. “Unfortunately, I came too late, because I would have said, ‘OK, that’s (Mastroianni) my father.’ And Marlon Brando, can you imagine? What a waste.”

“A priest fell in love with her and started writing letters,” Squitieri added.

“I have an incredible number of letters from fans,” Cardinale pointed out. “They want to be with me, to live with me (laughs).”

But Cardinale stressed, “I had only one. The father of my daughter.” Squitieri said of her dad, who died in 2017. “He was a lucky man.”

Cardinale claimed that Marlon was the only actor who attempted to seduce her. Squitieri teased her: “She’s lying to us. Alain Delon and Luchino Visconti made a bet during the making of a film (‘The Leopard’). But my mother understood that there was a bet (so nothing happened).”

On working with director Visconti in several films, Cardinale replied, “Visconti was incredible. I did four movies with him.” 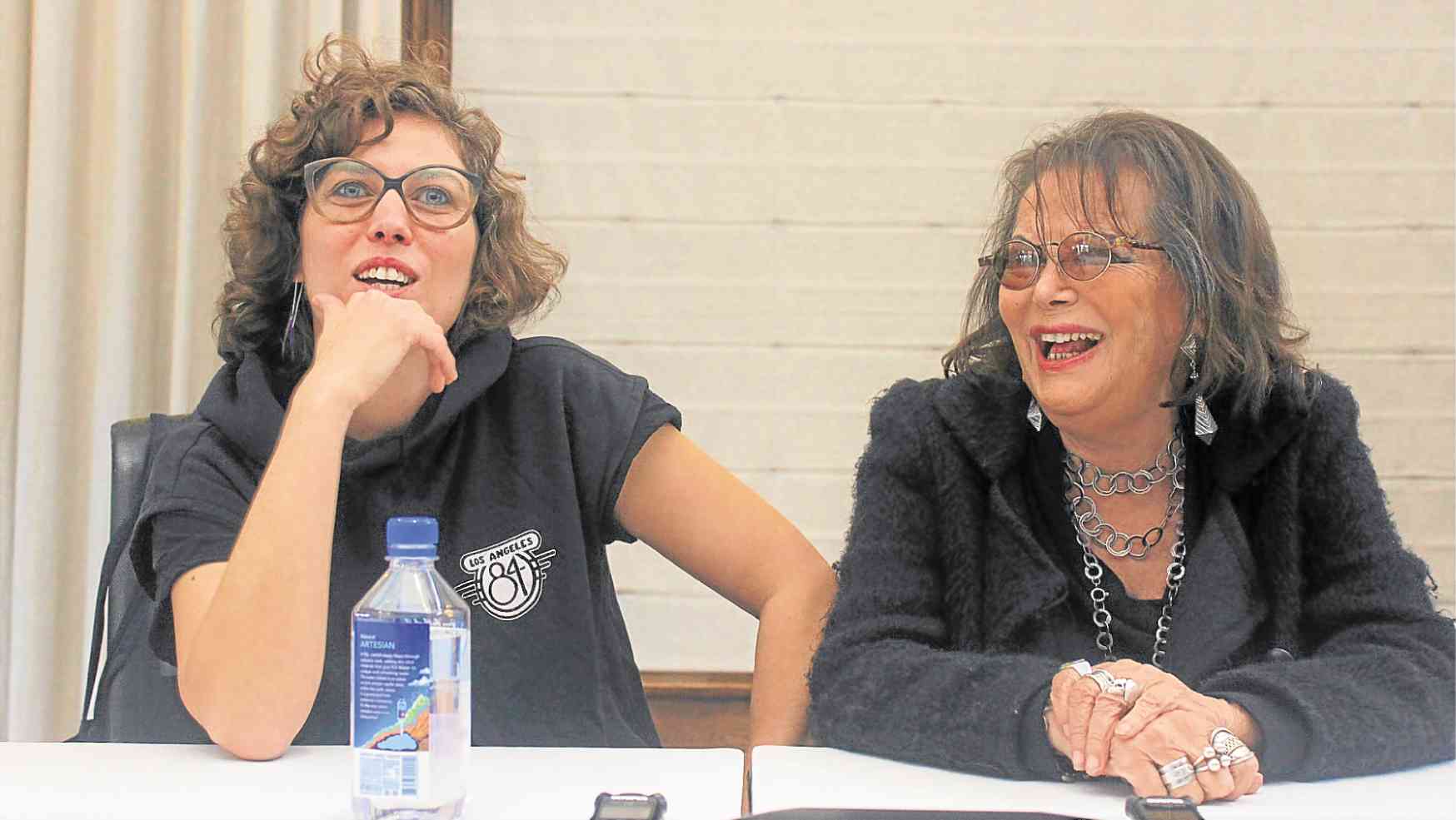 Squitieri continued, “I even remember a story with Warren Beatty …”

“He did a book and put me on the cover,” Cardinale said.

Cardinale stressed, “I don’t like (the tag) ‘sex symbol.’ I’m an actress. To do this kind of work, you have to be very strong inside.”

During her Hollywood days, Cardinale’s friends included Rock Hudson and Marilyn Monroe. Of the latter, Cardinale said, “She let me stay in her house. It was incredible to be there.”

Squitieri pointed out, “She said that when she was invited to come to Hollywood and work here, she didn’t somehow feel that it was her world. She came from Tunisia, and she feels very European.

“But one thing that I can say is that at the time in Europe, she had the producer, assistants and chauffeurs. When she traveled (to America), she was freer. So I know through people I’ve met that she would party with Warren Beatty. She had a lot of fun because she would only travel with one assistant. The husband would not be there, so she was more in a party mood. She loved parties. She still does, by the way (laughs).”

As the winner of the Most Beautiful Italian Girl in Tunisia search when she was 18, Cardinale earned a trip to attend the Venice Film Festival. That led to her breaks, including her feature film debut opposite Omar Sharif in “Goha.”

She signed a seven-year contract with producer Franco Cristaldi, who eventually adopted Patrick Frank, her son with a French man.

“In the beginning, I was with a top producer (Cristaldi),” Cardinale recalled. “I was doing four movies a year. He was a fantastic producer. But I had no money in my bank. Nothing (laughs). After I cut ties with him, I met the only man of my life, who is the father of Claudia.”

“She came to America,” Squitieri said. “The change, the switch in her life happened in America, in New York. She took her luggage and left everybody (in Italy). She went with my father, who represents the second part of her life. It was the time when she started reading her own scripts and being independent.”

Cardinale continued the story: “I did 11 films with him (Pasquale). But when I met him, he had lots of girls. And after, pow! Only me (laughs)!”

Cardinale in “Once Upon a Time in the West”

Asked how it’s like to live with a mom who was a screen siren, Squitieri laughed and replied, “My mother had me when she was 40. When I was 10, she was 50. So I didn’t suffer from having this sex symbol mother.

Cardinale’s proud of her other passions. “I’m an ambassador for Unesco. I defend women. Equality.”

She explained why she had been living in Paris: “It was impossible to stay in Rome. I had to change houses three times … because the paparazzi were always in front of my door.”

On her favorite film, Cardinale exclaimed, “Once Upon a Time in the West!”

But Squitieri added, “She’s had beautiful roles. But one of the films that I remember my mother speaking to me very fondly of was the first film where she was a protagonist, which was ‘La ragazza con la valigia’ (‘Girl with a Suitcase’) by Valerio Zurlini.

“I remember her telling me that somehow Zurlini chose her not by chance. He connected with her soul at that point. It was a very important film for her because it gave her a lot of foundation. Zurlini was a great master. He taught her a lot.

Toward the end of our chat, Squitieri revealed, “My mother has a great collection of clothes, which were being eaten by time. We’ve taken them out and we’re going to have an auction at Sotheby’s. Obviously, it’s a lot of clothes from Italian designers, like Roberto Capucci and Renato Balestra.”

With many memorable films to her credit, Cardinale claimed that she rarely watched her films. “No, I’m not nostalgic. I continue to do movies. I never stop.”