Sundance: An ode to Springsteen in 'Blinded by the Light' | Inquirer Entertainment

Sundance: An ode to Springsteen in ‘Blinded by the Light’ 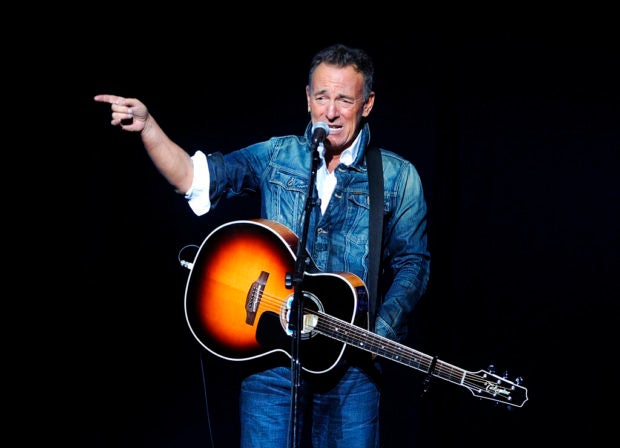 FILE – In this Nov. 5, 2018 file photo, Bruce Springsteen performs at the 12th annual Stand Up For Heroes benefit concert in New York. Seventeen Springsteen songs are featured in the film, “Blinded By the Light,” which premiered at the Sundance Film Festival Sunday night. Image: Brad Barket/Invision/AP, File

PARK CITY, Utah — “Bend It Like Beckham” director Gurinder Chadha knows a little bit about being a Bruce Springsteen fan, having seen The Boss at Wembley Stadium in 1984 where she proudly stood atop her chair and sang her heart out to his songs. So when she came across Guardian journalist Sarfraz Manzoor’s memoir about being a British Muslim boy who finds inspiration, comfort and understanding of his own circumstances in Springsteen’s lyrics, she knew it would be perfect for a film.

Ten years later, the 1987-set “Blinded by the Light,” premiered at the Sundance Film Festival Sunday night to a warm response for the feel-good film that’s packed to the brim with 17 Springsteen anthems. As the lights went down, the crowd in the Eccles Theater whispered rumors of a possible Springsteen appearance in Park City. He wasn’t there and was never supposed to be, but as Chadha explained, he “didn’t want to take away from the movie.”

Springsteen gave his blessing to Chadha and Manzoor to do the film back in 2010. They had both gone to the red carpet for the premiere of the rockumentary “The Promise: The Making of Darkness on the Edge of Town” hoping to maybe get a picture with him. Springsteen recognized Manzoor and came over to tell him that he’d read his book.

“He nearly had a heart attack and landed on the floor,” Chadha said. “And I said, ‘Hey Bruce, my name is Gurinder and I’m a filmmaker and I really want to make a film of this book, will you support us? And he said, ‘Sounds good! Talk to Jon.'”

With The Boss’ blessing — and the support of his managers Jon Landau and Barbara Carr — they were suddenly developing the script. It turned in to a seven-year project.

“Everything we wrote we wanted to make sure Bruce would approve given we were using his life’s work, his music. We had a responsibility to not treat that music lightly,” she explained of the lengthy process.

It’s the first time Chadha has made a film about the British-Asian community since 2002, when with her breakout hit “Bend It Like Beckham” was released. She felt the time was right to explore that theme again.

“It’s a film that serves to bring people together with music and words. For me, this is very timely given the state of your nation (the U.S.), my nation Britain in terms of divisiveness and people calling for separation and xenophobia basically. This film is a hopeful statement,” she said. “Words can have meaning despite your cultural background. A human soul can transcend all kinds of human boundaries.”

As the dust settles the morning after the premiere, the film is on track to secure a healthy sale too. New Line is in talks to acquire world rights, minus a few territories, for “Blinded by the Light” for a cool $15 million (around P787 million) — which would make it the biggest sale of the 2019 festival yet. No release date has been set. MKH