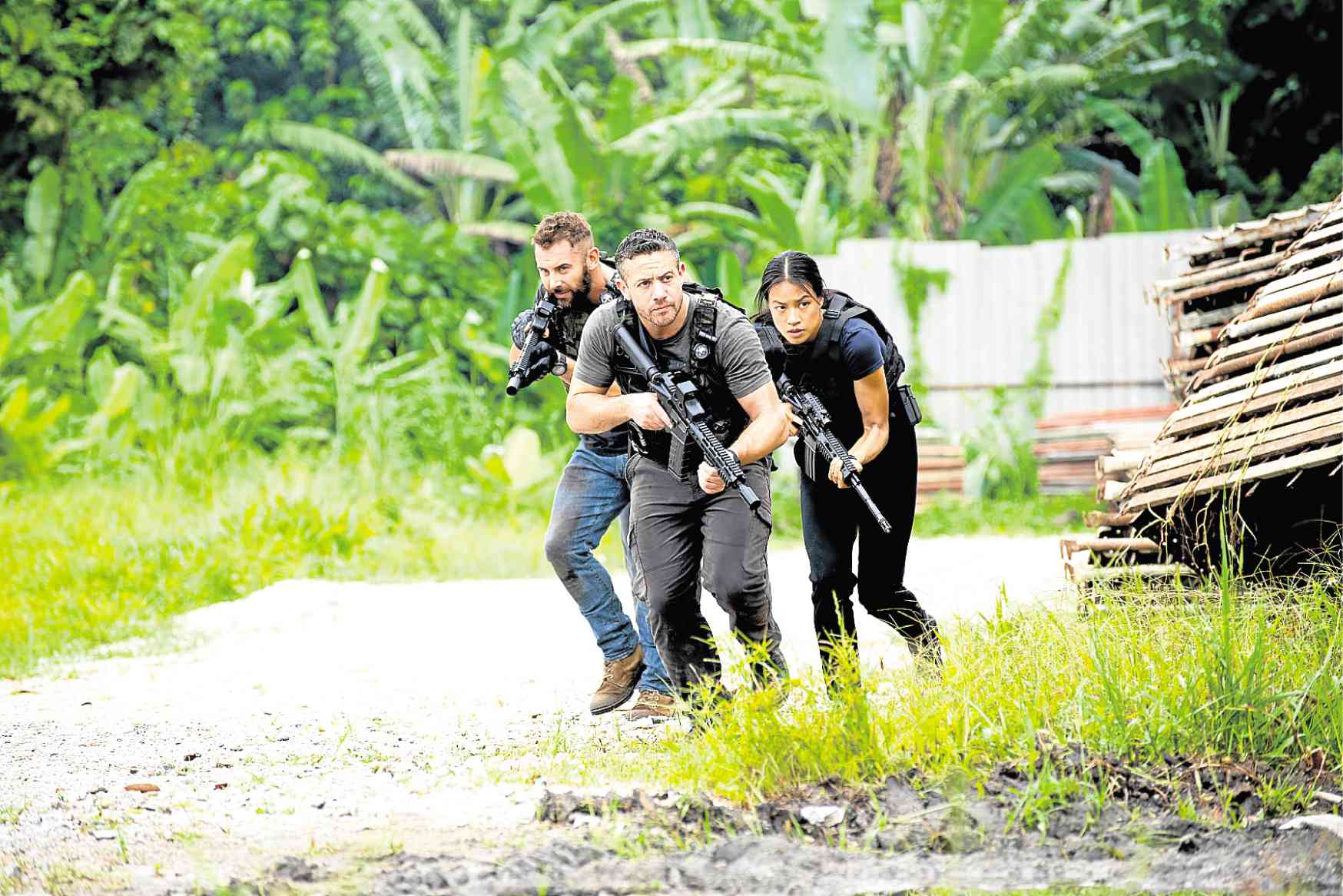 Daniel MacPherson, Warren Brown and Ann Truong in “Strike Back”

It’s not wise to get on Alin Sumarwata and Yasemin Kay Allen’s bad side. In fact, you need not see how they execute their pulse-pounding fight scenes in Cinemax’s “Strike Back” to know that the spunky Australian actress and her lovely Turkish costar are no pushovers.

This we realized during our chat with Alin and Yasemin over a long weekend sometime last year, while they were taking a break from shooting an episode for the action series’ latest season in Johor Bahru at the southern tip of the Malay Peninsula in Malaysia.

For “Strike Back’s” 10-part sixth season, which kicks off today at 11 a.m. (with an encore telecast at 10 p.m. on HBO Go and Cinemax), the covert special ops soldiers of Section 20—Thomas “Mac” McAllister (Warren Brown), Samuel Wyatt (Daniel MacPherson) and Gracie Novin (Alin)—are sent on a mission to Malaysia to investigate a Russian bomber that crashes into the South China Sea.

The trio plunges into its do-or-die mission head-on as it attempts to shut down the deadly operations of a drug-peddling Triad gang in Kuala Lumpur, uncover a corrupt plot by a wealthy businesswoman running for Parliament, face off against warlords, and plunge into the jungles of the Golden Triangle in Myanmar. On top of that, they must uncover a conspiracy that “threatens to push the world to the brink of global conflict.”

Season 6 takes place six months after Section 20’s last mission. But what is supposed to be a cleanup job quickly becomes very personal for Gracie when she learns that her ex-squeeze, Zoey Davies, has died under questionable and tragic circumstances!

Also helping them chase the baddies is Inspector Amy Leong (Ann Truong) of the Malaysian police—who turns out to be the estranged daughter of Laoshu, the deadly former enforcer of the Shun-Ko Triad.

But the complex situation comes to a head when Mac, Sam, Gracie and Katrina find out that a British high commissioner is actually in collusion with the Triad!

Yasemin, who is the newest member of the cast, is thrilled about joining cast members who “have known each other for so long,” because they’re “a fun bunch who operates well in the system that’s already in place.” 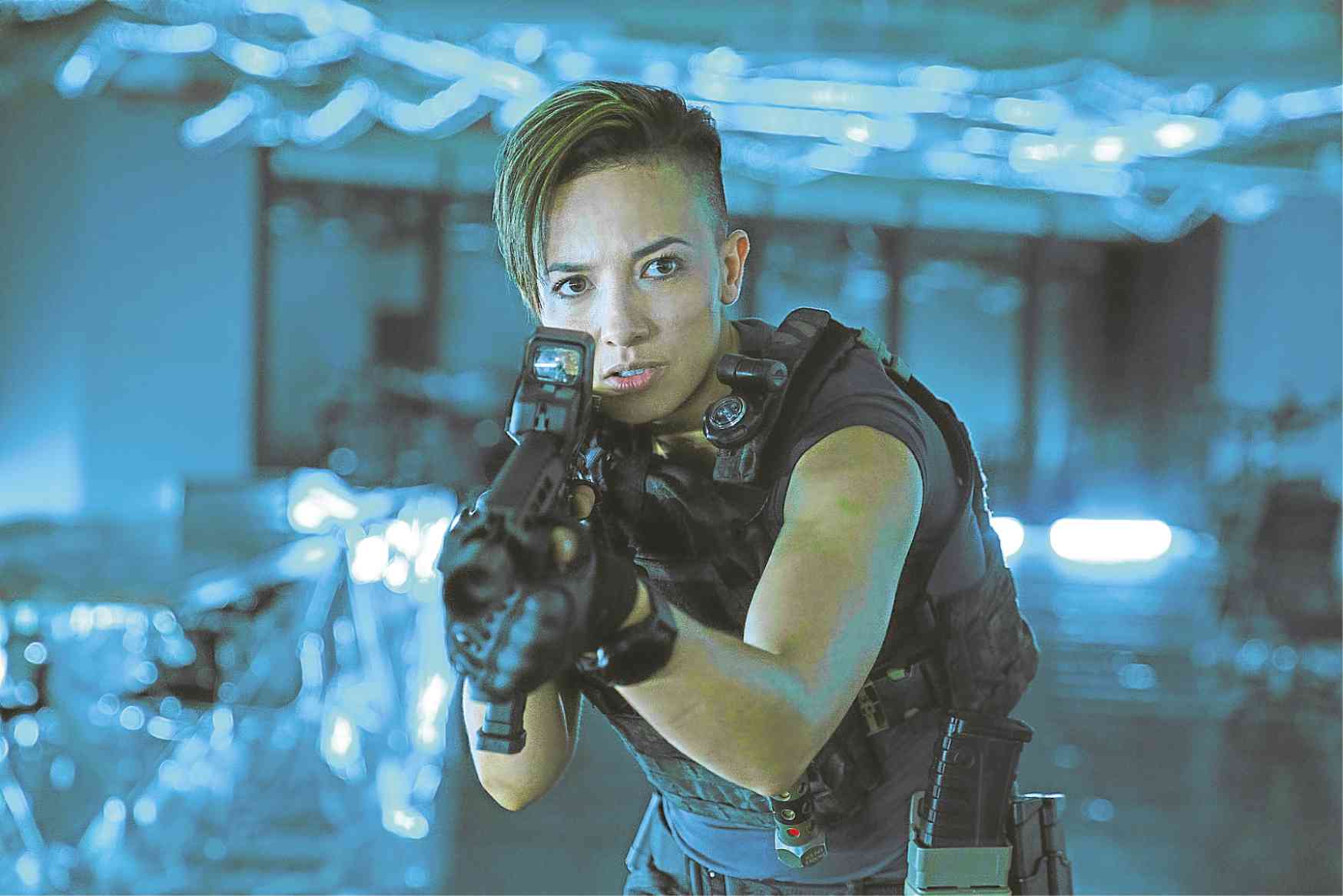 “I have lived in Turkey all my life, and I wasn’t familiar with the series,” she explained. “So, joining the show was like getting thrown in at the deep end. I had to get to know the other actors quite quickly.”

For Alin, the latest season gave her a chance to get to know her character better. “I was given more time to examine Gracie’s motivation and emotional journey. This time, the soldiers get to explore how they deal (or refuse to deal) with all the killing and its psychological effects on them, the struggle to stay focused on their mission, and how they come to terms with loss.”

Our Q&A with Alin and Yasemin:

We were told that the two of you have very interesting story arcs this season. Would you like to talk about that?

Yasemin (Y): To begin with, we’re on opposite sides, but we’re also heading for the same goal. What makes it doubly interesting is the life-and-death situation Gracie and Katrina are both exposed to, and you wonder how much you can let yourself care about somebody else because of the constant risk of loss.

That knowledge really heightens the senses and the amount of empathy you feel for somebody else. You don’t talk about it much because doing so makes you feel vulnerable. But between these two characters, you can really feel that unspoken friendship. It’s a lovely thing to explore.

Alin (A): The tension comes not just from not knowing whether we should trust each other, but also from acknowledging that we need to, if we truly want to get the job done. We have to work as a team. You end up watching each other’s back as you watch your own (laughs).

The series isn’t afraid to kill off popular characters. When you get the script, do you flip through the pages and see if you’ve just been terminated?

A: Kind of. That’s the first thing I remember someone saying, “There’s a bullet in it [the script] that’s waiting for you (laughs). So, you just enjoy the ride.

It’s refreshing to see women kick ass in the show. Did you have to train hard for it?

Y: It really excited me to see that last season, especially watching Alin in her action-packed scenes. I had two weeks to prepare. Before that, I’ve done some boxing just for fitness. I’ve dabbled in martial arts, but I’ve not done anything long-term. You take as many tips as you can from the crew because it’s a major part of the role.

Another thing that I like about the show is that you don’t feel like you’re being made to play the victim … there’s no sense of pity for the female characters. They wrote the show for four soldiers, not whether a role is a better fit for a male or female actor. It’s great to pick up a script and not have to roll your eyes out of frustration (laughs).

A: One thing that made it very clear for me was the fact that Gracie is a soldier who has very practical objectives. Her emotions are linked to a mission or what she’s tasked to do. It’s the kind of role where you can’t really fake it—you’ve got to know how to handle weapons and understand how they work.

In some ways, it’s easy because there’s a clear training path in getting the role done. And I guess as women coming into it, especially for me, I just never wanted a different judgment, like [the inability to accomplish something because] she’s a woman. More than her gender, Gracie is a soldier. But in terms of getting the job done, there’s no difference—we’re all soldiers!

In terms of training, I had a little bit of martial arts when I was at university. I also joined the kickboxing club, but it was merely recreational at the time. When the role came, I just had my second baby (with her husband, award-winning Australian actor Don Hany), and I was not in any shape to do it. So martial arts was the quickest way to get back into shape. 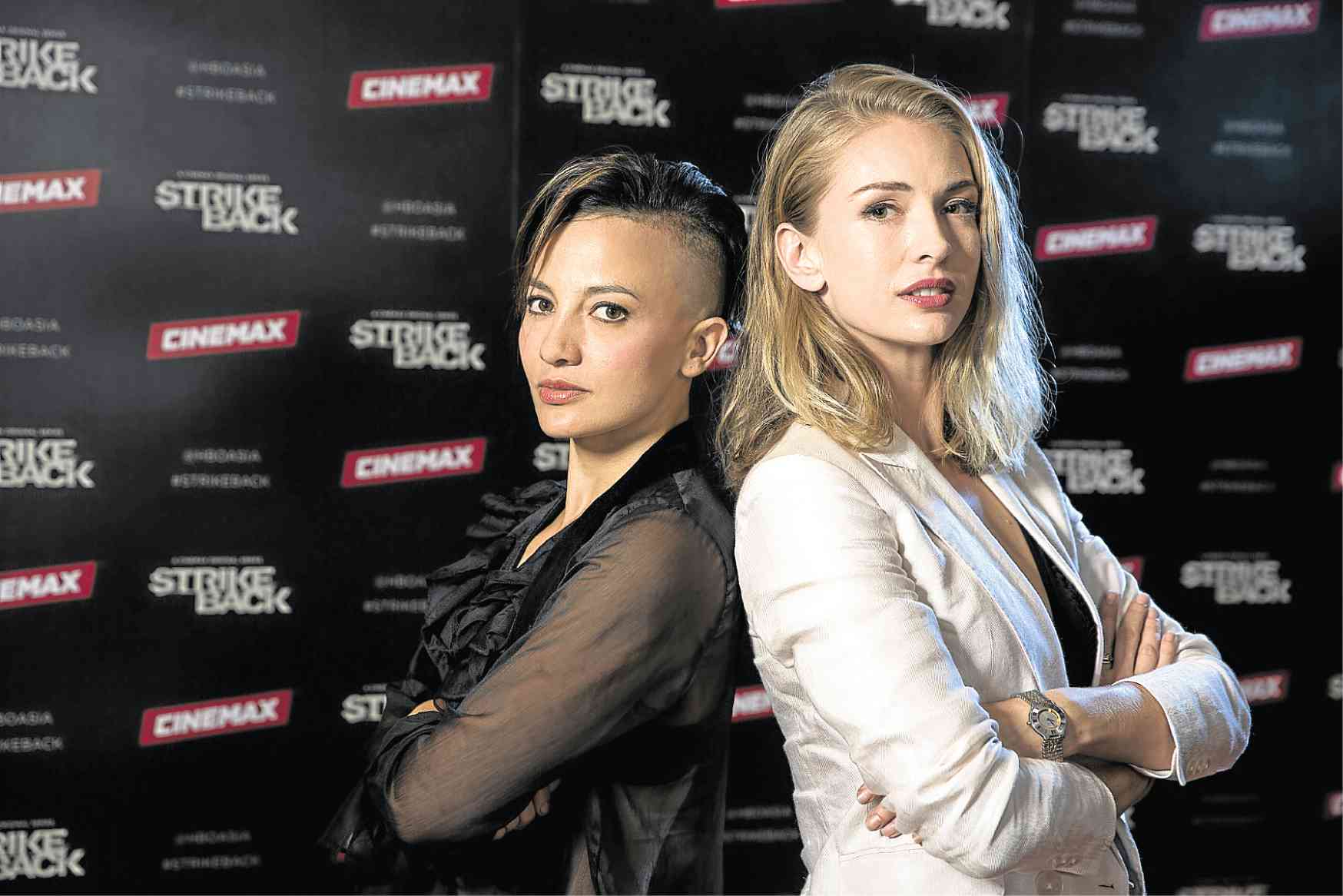 Movement is definitely a part of it. I also realized that a lot of the choreography is very dance-like. Some of the stuff you learn in martial arts you just have to let go because, when you shoot these scenes, it’s not how hard you hit but how big you hit. It’s a completely different art form.

But, staying fit is something we need to be consistent about—all of us work out every day … or, sometimes, even twice a day.

Do you need to like your character to be able to play her well?

Y: There’s an element in characterization that discourages actors to use words that “judge” their characters. So, even if you don’t agree with their decisions, you shouldn’t use adjectives that judge them because if you do, you won’t be able to connect with them. You’ll just be distancing yourself from your character.

What was the hardest scene for you?

Y: For me, it’s been the fight scenes. The choreography has been the trickiest bit for me.

A: It’s hardest when they mix weaponry, automotive and explosives together—it’s tricky when you have all three in one scene. That and getting stuck in the mud or in a quicksand.

What kind of feedback do you get from soldiers and war veterans?

A: Taking on this role was one of the most nerve-wracking things for me, because you don’t want to disappoint the soldiers whose stories you’re supposed to breathe life into. You’re representing soldiers who lay down their lives for others—and you just don’t want to let them down.

It feels great when I get encouraging messages and positive feedback from real soldiers, because that means you’re doing something right—and you know that everything’s gonna be OK.