LOOK: Isabelle Daza drafts contract for her helpers so they’d ‘know their rights’

Isabelle Daza revealed she is ensuring that her house help know their rights as employees through a contract. 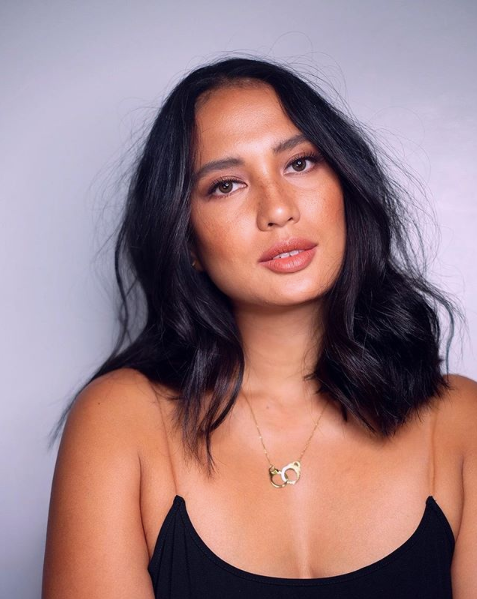 The actress shared on Instagram Stories today the contract written in Filipino which details their duties, work hours and benefits.

“So I decided to create a contract for my helpers at home to show their job description and their rights as an employee,” she wrote over a picture of the contract.

“This is also so they know they cannot get fired over simple mistakes,” she noted. 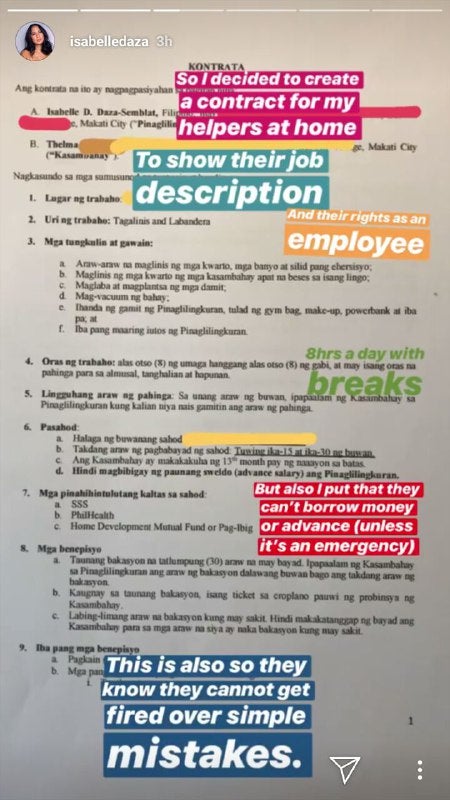 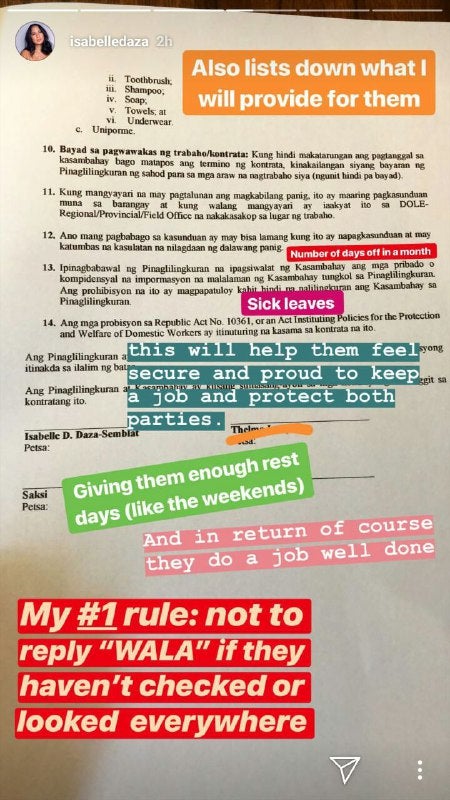 The job description for one Thelma lists that the rooms, bathrooms and gym room should be cleaned every day. Other duties include washing and ironing, vacuuming the house and preparing the employer’s belongings, including the “gym bag, make-up, power bank at iba pa (etc.).”

It is listed that the helper will work eight hours a day with breaks, and has a day-off once a week. As for salary, the helper is entitled to receive it every 15th and 30th day of the month, and will also receive a 13th-month pay as required by law. However, she will not be given an advanced pay, save for emergency situations. Deductions from the salary are contributions to government agencies Social Security System (SSS), Philippine Health Insurance Corporation (PhilHealth), and the Home Development Mutual Fund or Pag-IBIG.

Leave benefits include a 30-day paid vacation leave and airfare to the helper’s province. The helper is entitled to a 15-day sick leave without pay.

Enumerated are other benefits such as food, some hygiene products, towels, underwear and uniform covered by the employer.

Stated in the contract too are the agencies that a domestic worker can reach out to in case she feels that she was wrongfully terminated.

It is considered as well that the helper’s rights are covered by the provisions in the Domestic Workers Act or Republic Act 10361 which was passed by President Benigno “Noynoy” Aquino III in 2013.

“This will help them feel secure and proud to keep a job and protect both parties,” Daza explained. “Giving them enough rest days (like the weekends) and in return of course they do a job well done.”

“My #1 rule: Not to reply ‘wala (none)’ if they haven’t checked or looked everywhere.”