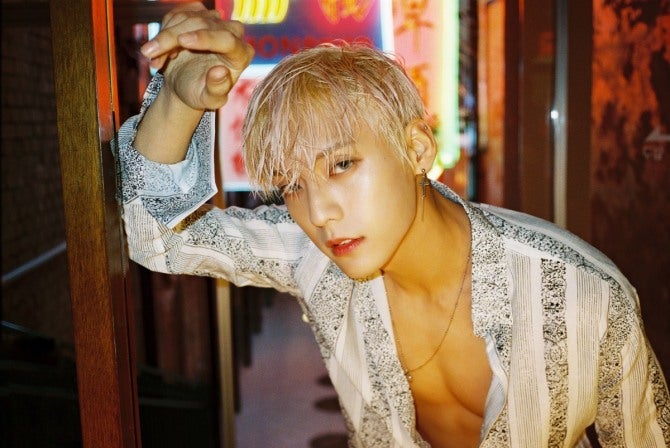 Cube Entertainment via The Korea Herald

The singer’s new album saw him heavily take part in the making of 11 tracks in genres ranging from future bass, hip-hop and R&B, all the way through to disco, writing the lyrics and melodies as well as helping produce.

His album comes just weeks before the singer will be enlisted in the military to serve as a conscripted policeman in February. Though he released the self-produced single “Purple Rain” as part of his group BTOB’s project in the past, “Hutazone” marks his first studio album.

Speaking at the showcase event Tuesday in Seoul, Lee said he wanted to express himself through “Hutazone,” which is a nod to his nickname “Huta”

As “Huta” refers to the great amount of practice that goes into being a good baseball player, Lee said he wanted to create a “world of his own” with the new album, which he worked hard on.

“It was hard at times due to my busy schedule, what with recording albums as BTOB, but I worked hard to create an album I can be satisfied with,” he said.

Lee originally didn’t have a plan for a solo album at first but he told the press that he was encouraged by his older brother who told him he is “talented and capable enough.”

“I kept the album as a secret from the bandmates,” he said, before adding, “I just wanted to surprise people around me, my bandmates with a quality album in the final stages,”

Marking the beginning of his solo career, the title track “Ya” see Lee power through a tightly choreographed dance to a PBR&B sound — also known as “hipster R&B.”

Lee said he wanted to make a “dynamic” and “trendy” tune and explained the title of the track means both “hey” in Korean and “you.”

The track sees the singer discuss being true to himself as well as being happy with someone he cherishes through the lyrics.

Lee also collaborated with (G)I-DLE’s Soyeon on the upbeat dance track “You Too? Me Too!” which was the first time he worked with a female rapper.

He will begin his mandatory military service in February, following the footsteps of fellow bandmate Lee Chang-sub, who also released his own solo album in December.

“I was just happy and thankful to have been given this opportunity and want to just have fun before I go,” he said.

As teaser images and trailers have already hinted, Lee is putting on a more mature front for his solo debut album, a departure from his usual innocent boy-next-door look as a member of BTOB, as he hopes to present himself as a “well-rounded multi-entertainer.”

The musical “Jekyll & Hyde” has been the motive behind the artistic video for “Ya” which sees the singer fight his unavoidable instinct that awakens within him while featuring powerful dance performances and dynamic visuals.

The video also gives a glimpse into what is in store for his two-day concert in February.

“I want to show different sides of me including conflicting images, just like Jekyll & Hyde,” he said of the upcoming concert.

Read Next
Rihanna sues father over use of their last name for business
EDITORS' PICK
Notice of 2020 regular meeting of stockholders June 18, 2020
SM prepares for ‘safe malling’
Leveling up your ‘lutong bahay’ with the kitchen companion you never knew you needed
NBI, Immigration to join hunt for ‘underground’ medical clinics
2 Chinese nationals arrested in raid on another unlicensed COVID-19 hospital in Pampanga
P2.2 trillion in losses: Cost of COVID-19 impact on PH economy
MOST READ
Revillame tells Roque: ABS-CBN is in my heart despite being in rival network
NCR is ready for GCQ — Palace
LOOK: Robredo, Vico Sotto, check Community Mart ops in Pasig
Año: Quarantine passes not needed in GCQ, movement restricted to essential travel
Don't miss out on the latest news and information.