‘The Upside’ is a cliche-ridden, exploitative mess—a film review 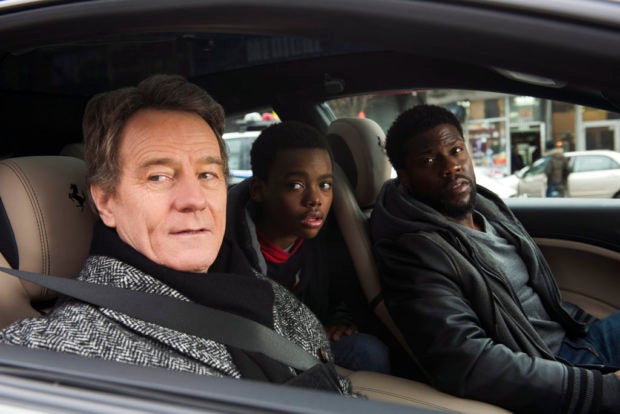 This image released by STXfilms shows Bryan Cranston, from left, Jahi Di’Allo Winston, and Kevin Hart in a scene from “The Upside.” Image: David Lee/STXfilms via AP

It’s said that January is one of the prime months that Hollywood chooses to dump its most embarrassing films and “The Upside” doesn’t exactly disprove that notion.

Few films in memory have squandered so much acting talent in such a cliche-ridden, exploitative and dishonest way. It deserves its frozen grave.

The film stars Kevin Hart as a lazy, skirt-chasing ex-con hoping to reconnect with his estranged wife and son. He accidentally gets a job taking care of an obscenely wealthy New York businessman who became a paraplegic while hang gliding, played by Bryan Cranston. (“You as rich as Jay-Z?” Hart’s character asks. “No, richer,” comes the reply.)

You can virtually write the rest as “The Upside ” unspools. Will Hart’s street-wise Dell break his high-class boss out of his luxury Park Avenue apartment and teach him about the joys of corner-bought weed, street hot dogs and driving the older man’s fleet of Ferraris very fast? Oh, yes. Rich white dudes in these films always need loosening up.

Will Cranston’s Phillip teach his young aide about the joys of opera, investing in start-ups, kumquats and abstract painting? You saw that coming, too, huh? Poor black guys in these films could always use some smartening up.

The movie is based on a true story — and lifted from the 2011 French film “Les Intouchables” — but no one really worked on the shaky racial angle for an American audience, one that has seen elements of this in movies such as “Driving Miss Daisy” or “Trading Places” (that last one also has a pottery smashing scene).

Hart often plays a version of the magical black man, a hurricane of truth who readjusts the stuffy white world. There are moments when race could have been addressed — “Your plantation is bananas,” Hart’s Dell tells Phillip, “but I’m nobody’s servant” — however it’s quickly dropped. There’s also a moment when the two men bond over both feeling mostly invisible to the larger society — one in a wheelchair, the other a minority in white America — but that peters out.

There’s not enough drama and yet not enough laugh-out-loud moments. Hart shines in a scene in which he encounters a high-tech shower with a robot voice in German, but a later scene in which he cuts Cranston’s facial hair is marred by a Hitler joke. When you have hired consummate comedians in Kevin Hart and Bryan Cranston, relying on a Hitler joke is a sign something has gone horribly wrong. (Another sign: This joke — “You are Verdi ugly.”)

The film comes with its own heavy baggage, including that it was previously owned by The Weinstein Co., before it collapsed amid the Harvey Weinstein sexual misconduct scandal. Reacquired, it is released as Hart deals with fallout over his previous homophobic tweets, not helped now by a performance in the film in which he balks at using the word “penis” and initially outright refuses to change his boss’ catheter because it means touching another man’s privates.

Hart, a comic force, reveals his limits as a dramatic actor in his fish-out-of-water role, while Cranston shows only a few glimpses of his formidable skills, especially when he turns steely. Appearances by Nicole Kidman, Aja Naomi King and Julianna Margulies are welcome, understated — and completely wasted.

Mostly the problem is that once the filmmakers — led by director Neil Burger — establish their odd-couple pairing, they don’t know what to do with it. Dell needs money to repair his family and Phillip needs love after losing his wife.

Jon Hartmere’s screenplay needs tension, so it’s artificially added when the rich dude starts lashing out at his staff and growing depressed after a bad blind date. The answer? Our heroes go hang gliding. Roll credits.

Only one person really comes through this whole meandering mess unscathed: Aretha Franklin. The late Queen of Soul, it turns out, is the key that connects Dell and Phillip, particularly when it’s revealed that Franklin sang opera, too. Her music fills the soundtrack and that’s the only reason this film gets any points, the only upside, if you will. Better yet, skip this movie and just put on one of her CDs.

“The Upside,” an STX Entertainment release, is rated PG-13 for “suggestive content and drug use.” Running time: 125 minutes. A half star out of four. MKH