'The Captain and Tennille' Daryl Dragon dead at 76 | Inquirer Entertainment

Daryl Dragon of ‘The Captain and Tennille’ dead at 76 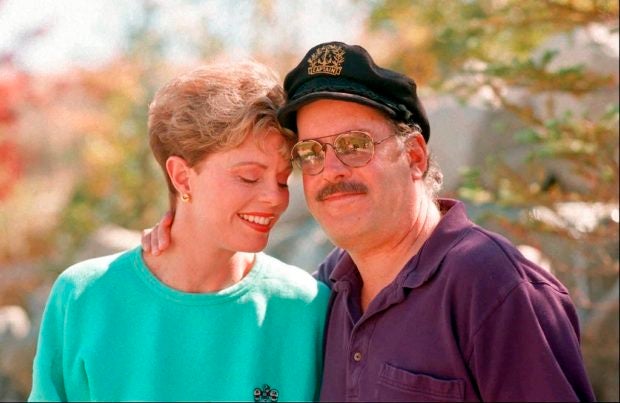 This Oct. 25, 1995 file photo shows Toni Tennille, left, and Daryl Dragon, the singing duo “The Captain and Tennille”, posing during an interview at their home in Washoe Valley, south of Reno, Nev. Image: AP Photo/David B. Parker, File

NEW YORK (AP) — Daryl Dragon, the cap-wearing “Captain” of “The Captain and Tennille” who teamed with then-wife Toni Tennille on such easy listening hits as “Love Will Keep Us Together” and “Muskrat Love”, died Wednesday at age 76.

Dragon died of renal failure at a hospice in Prescott, Arizona, according to spokesman Harlan Boll. Tennille was by his side.

“He was a brilliant musician with many friends who loved him greatly. I was at my most creative in my life, when I was with him,” Tennille said in a statement. Dragon and Tennille divorced in 2014 after nearly 40 years of marriage, but they remained close and Tennille had moved back to Arizona to help care for him.

Dragon and Tennille met in the early 1970s and soon began performing together, with the ever-smiling Tennille singing and the dourer Dragon on keyboards. (He would later serve as the Captain and Tennille’s producer). Their breakthrough came in 1975 when they covered the bouncy Neil Sedaka-Howard Greenfield song “Love Will Keep Us Together.”

Sedaka and Greenfield, a top hit-making team in the early 1960s, were nearing the end of their partnership and had written the song as an ode to their longtime bond. Sedaka himself recorded the song, released it as a single in France and included it on his 1974 album “Sedaka’s Back.”

The Captain and Tennille’s version, slightly faster and more elaborately produced than the original, topped the charts in the summer of 1975 and honored Sedaka’s authorship when Tennille sang “Sedaka’s back” at the close. “Love Will Keep Us Together” won a Grammy for record of the year and not only made the Captain and Tennille stars but helped further revive Sedaka’s career. In October 1975, his single “Bad Blood” hit No. 1.

Meanwhile, the Captain and Tennille followed with a mix of covers such as “Muskrat Love” and “Shop Around” and original songs, including Tennille’s ballad “Do That to Me One More Time,” which hit No. 1 in 1980. They also briefly starred in their own television variety show before their careers faded in the 1980s.

A Los Angeles native, Dragon was the son of Oscar-winning composer Carmen Dragon and singer Eloise Dragon and was himself a classically trained musician. Before he was with Tennille, he played keyboards for the Beach Boys and was dubbed “The Captain” by singer Mike Love, who noted Dragon’s fondness for sea captain’s caps.

In 2016, Tennille published “Toni Tennille: A Memoir,” which presented their marriage as far removed from their cheerful hits. They wed in 1974, but Tennille recalled that their marriage was announced in advance — and to their surprise — by the record company. The couple, which had been living together, made it official in November of that year.

Tennille would allege that the marriage suffered from a lack of intimacy and blamed it on what she described as Dragon’s “very, very difficult family” and “famous but overbearing father.”

“‘I kept trying and trying and thinking I could bring this man who has so much to give into the light,” she told NBC’s “Today” show in 2016. “I wanted him to experience the joy that I had with my very loving family.”

He is survived by his older brother, Doug Dragon and two nieces, Kelly Arbout and Renee Henn. KM

Bob Einstein of ‘Super Dave’ and ‘Curb’ fame dies at 76