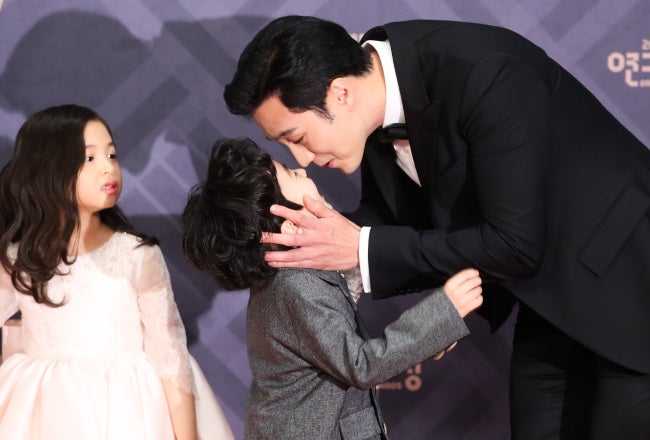 Once considered just another pretty face, So Ji-sub has effectively solidified his position as one of the top actors on the small screen, notching his first top acting award from one of the three network television broadcasters in Korea.

So won the grand prize at the annual MBC Drama Awards held Sunday at the MBC Media Center in Sangam-dong, western Seoul. The honor was for his performance in the MBC drama “My Secret Terrius,” which aired between Sept. 27 and Nov. 15 and peaked with a 10.5 percent viewership share.

In the drama, So played a former secret agent who accidentally becomes a babysitter for the twins across the street.

The 41-year-old actor spent well-over a minute thanking his colleagues, from the production staff, the actors, the director and the employees at his agency. He even took time to do the “nose kiss” with fellow actor Kang Ki-young, which he had pledged to do if he won the prestigious award.

It marked a contrast to his usual routine, as he is known as a man of few words when accepting awards. This includes the famous “Thank you” acceptance speech at the 2012 SBS Drama Awards, during which he came up and just uttered the two words before stepping down.

The actor also took home the best male acting award, while his drama won six trophies including best viewer-picked drama of the year.

His major breakthrough came when starring in the massively-popular 2004 KBS drama “I’m Sorry, I Love You,” when he won a number of acting awards including the most popular actor award at the 40th Baeksang Arts Awards.

Despite a number of hits and accolades under his belt, the top prize has always evaded So, as his acting prowess was rarely considered to be among the best.

Veteran comedian Lee Young-ja proved to be the biggest winner in the non-acting portion of the TV awards, winning the top prize at KBS and MBC. She was the first female grand prize winner in the history of the KBS entertainment awards show. Singer, actor and TV host Lee Seung-gi won the top award at SBS.

But controversy broke out when celebrity chef Baek Jong-won, who currently hosts three food-related shows with his name in the title at SBS, was snubbed by the broadcaster. He went home without a trophy, despite being considered to be a front-runner for the top award.

Some disgruntled fans even took to the presidential office, with multiple petitions filed at the Cheong Wa Dae’s homepage. Cheong Wa Dae is mandated to officially answer any petition with over 200,000 signatures, although this appears unlikely as the most popular petition on this subject — one calling for a state audit on Lee Seung-gi’s agency — only got 180 supporters as of Monday morning.

Amid the petitions calling for the state to intervene in the TV award show, some people have even petitioned against such petitions, or to punish those demanding that the state use its authority to give prizes to their favorite stars.