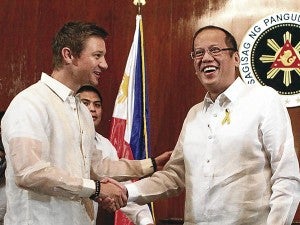 Star struck Presidential Security Group members relaxed their strict dress code for Renner, who came along with the producers of the movie “Bourne Legacy”  to pay a courtesy call on President Benigno Aquino III.

At the President’s Hall, Renner,  producers Patrick Crowley and Dan Stillman and Filipino producer Jun Huban waited patiently for President Aquino to appear as Palace reporters and photographers took pictures of the lead star with their cameras as well as camera-phones.

After a while, Renner turned to reporters directly behind him, saying “How are you guys doing?” Reporters cooed: “fine” and “okay.”

A television reporter  asked Renner about his singing skills, mentioning a YouTube video where he was shown belting some tunes.

He initially hesitated in answering, and then told her “not to believe” all that was shown in YouTube.

Soon after that President Aquino made his appearance and immediately shook hands with his guests.

When the Chief Executive  sat down, he eyed the reporters in the room and joked to his guests that the Palace press corps seemed to have “doubled” in size, eliciting laughter from the group.

The President’s entrance  signaled the end of the media coverage and reporters were asked to leave the room.

Presidential spokesperson Edwin Lacierda said that it was the Bourne producers who sought the courtesy call with the President  so  they could thank the government for its “valuable assistance in making sure the (filming of their movie) happened.”

“It would launch also our country as a tourist spot, and (show that) it’s more fun in the Philippines to have your film done,” he added.

Carandang said that the movie producers told President Aquino of their “admiration for the Filipino crew and producers’  professionalism and dedication.”

They thanked the MMDA, Office of the Executive Secretary, Presidential Communications Development and Strategic Planning Office, Department of Tourism and PCOO for their help “in making their filming experience easier,” according to Carandang.

He said the producers were happy they chose to film here instead of other locations they had earlier considered such as Vietnam and Indonesia.

“The President thanked them for choosing the Philippines and expressed the hope that this would boost tourism and lead to more film productions being staged in the country,” Carandang said.

Before his guests left, President Aquino gave them each a box of chocolates bearing the presidential seal as well as two books—one that dealt with his inauguration as President in 2010 and that dealing with his three siblings, entitled “The Sisters.”

In return, Renner and his companions gifted the President with the DVD copies of the Bourne movie series—Bourne Identity, Bourne Supremacy and Bourne Ultimatum. Renner also gave the President a DVD copy of his two films, “The Town” and “Hurt Locker.”

An official who attended the meeting said President Aquino and Renner had a chance to discuss the actor’s movie “The Town,” which was shot in Boston.

The Aquino family had lived in Boston where the President’s late father, Senator Benigno “Ninoy” Aquino Jr., went on exile during the martial law years.

The Bourne movie has been filming in the country over a month now. Its other lead stars, Rachel Weisz and Edward Norton, have already left the country.

Read Next
Through the years …
EDITORS' PICK
Tired of your Wi-Fi signal problems at home? Here’s a solution!
POVA x Mobile Legends Bang Bang: A partnership that’s built to win
Infants bundled off; no one hurt in PGH fire
OPINION: Mischief Reef – where it all started
Must-know scams to avoid when buying cars
Fire-damaged PGH calls for donations
MOST READ
Leonen impeachment case moves forward in House
Hot, humid weather for PH on Monday — Pagasa
Mischief Reef – where it all started
Woman believed to be dead wakes up minutes before her cremation
Don't miss out on the latest news and information.