End of marriage his saddest day 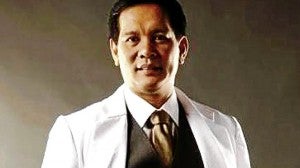 Joey Marquez has found a new love, but since she’s not from show biz, the comedian-TV host would rather not talk about her.

“She wants to keep our relationship private and I respect that,” the former Parañaque City mayor explained, declining to say when it all started.

He clarified, however, that they’re not getting into that “elaborate, contract-signing ceremony” anytime soon.

“I’ve been there. I know what I’m talking about,” said Joey, whose 13-year marriage to Parañaque City Councilor and actress Alma Moreno was declared null and void in 2004. She was awarded custody of their four children, Wyn-Wyn, Yeoj, VJ and MM.

“Thirteen years! In the beginning, I couldn’t wait for the process (annulment) to finish. But it was the saddest day of my life when I received the annulment papers. It was like all those years together meant nothing,” Joey said.

“I just wish nobody had to experience anything like it. Ness (Alma’s nickname) and I have moved on, though. You can even say we’re the best of friends. She’s happy with her new husband (Marawi City Mayor Sultan Fahad Salic).”

The children were affected, too, Joey admitted, but only for awhile. “I told them, ‘Don’t ever say your lives were ruined because your parents weren’t there for you—that would be a lie.’ Like Ness, I make it a point to spend time with them. We go out and have fun together when our schedules permit.”

He said getting married again would only pose complications. “I’m living a complicated life as it is. I hope the woman I’m with now understands. It’s not the piece of paper that matters, but my commitment to her.”

Now that he’s a Kapamilya artist—he signed a three-year exclusive contract with ABS-CBN recently—Joey said he’s prepared to be asked about former girlfriend, actress-TV host Kris Aquino. In fact, he said he wouldn’t mind interviewing Kris for his weekly program, “Showbiz Inside Report,” which he cohosts with Carmina Villarroel, Janice de Belen and Ogie Diaz.

“I’m here to work. I’d do anything for the show, including sit down with Kris.” Joey and Kris had a very public and controversial breakup in 2003.

He said his dream interview, however, would be with ABS-CBN president Charo Santos-Concio. “I’d like to know how, from being a simple employee, she became one of the most influential and powerful persons in broadcasting.”

(“Showbiz Inside Report” airs at 3 p.m. on Saturdays.)