Annie Lennox, who has stopped writing songs, on why she composed again 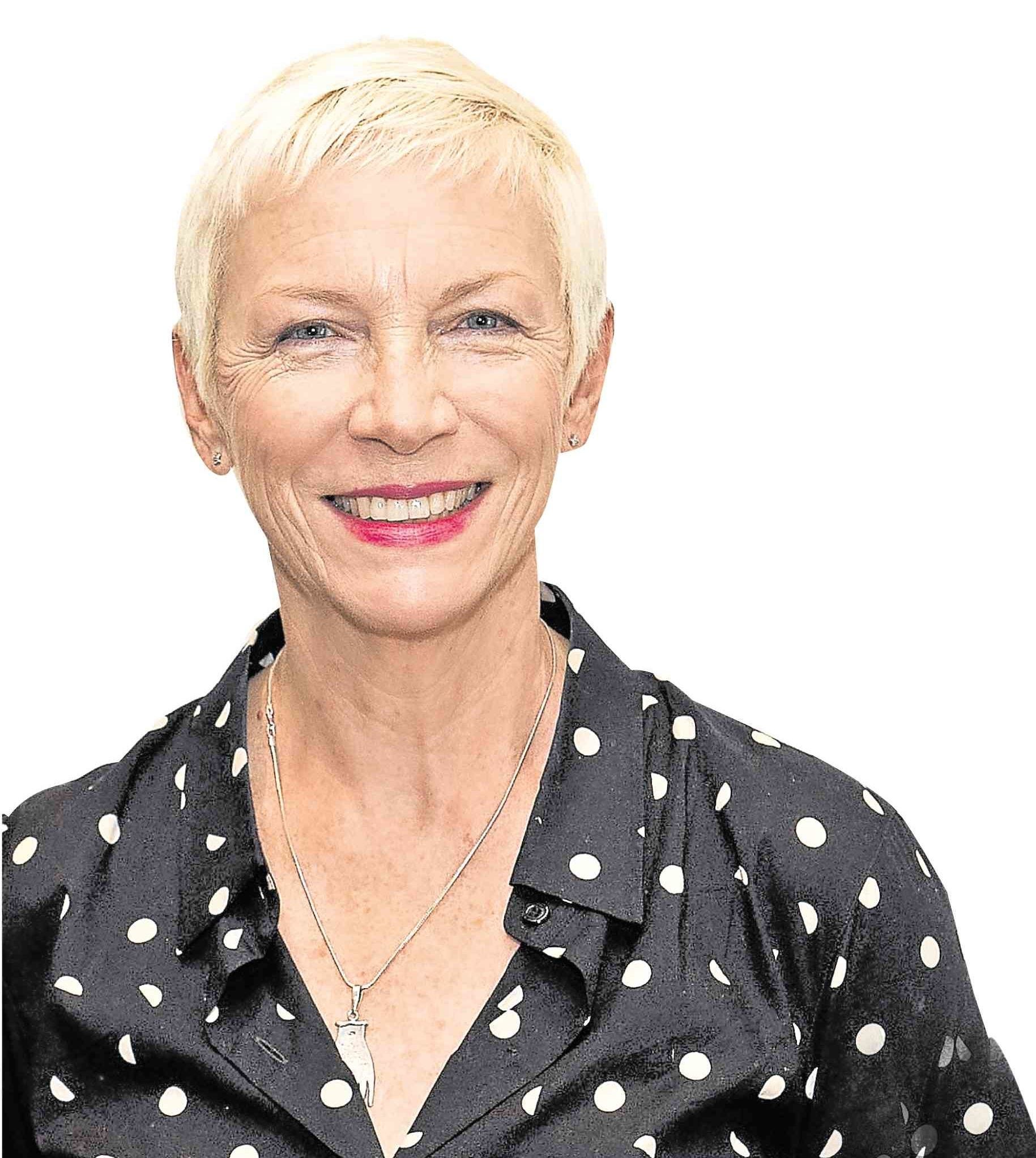 LOS ANGELES—Annie Lennox has stopped composing songs for almost a decade. But a film about a slain journalist inspired the singer-songwriter behind “Sweet Dreams (Are Made of This),” “Why,” “Would I Lie to You” and “Here Comes the Rain Again” to create a song again.

Marie Colvin, one of the most celebrated war journalists who was killed while working in Syria, and whose life is depicted in “A Private War,” motivated Annie to pen and sing a song again.

The result is “Requiem for A Private War,” for which Annie earned a best original song nomination in the coming Golden Globe Awards.

Also picking up a Golden Globe best actress-drama nod is Rosamund Pike for her portrayal of Marie in director Matthew Heineman’s biographical drama about The Sunday Times correspondent.

Annie, who was one-half of the Eurythmics (Dave Stewart made the other half) until she went solo, met Marie during an event for The Circle, a global nongovernment organization and network of influential women which she founded.

What drew you to this song, “Requiem for A Private War”? I was really drawn to write a song for Marie. I haven’t written a song in years. I wasn’t thinking of myself as a songwriter anymore. I was thinking I am an advocate and campaigner for global feminism. And that is what I am doing and that is my life’s calling and boom, I am here.

All of a sudden, I get this invitation to write a song for Marie. I hadn’t seen the film when I wrote the song. That’s the other weird thing. I went almost immediately to my keyboard, sat down and played a few chords, and a line came to me. I envisaged something that does pertain to what you see in the film, which is so synchronistic and strange.

I said to Matthew at the time, “If the song isn’t right, please don’t use it and don’t feel obliged because you asked Annie Lennox to write a song.

The song must work, and you must honor whatever message you’re trying to convey.”

So, it was a real privilege to write this song for Marie. I have been sharing with people that I did meet Marie briefly.

She came to an event for The Circle, which is an organization that I founded several years ago. She was inspired by the notion of women empowering women.

The fact that Marie came to one of our events was just mind-blowing. We were all so thrilled to meet her.

Then, inexplicably, Marie was killed. That was terribly affecting for her family, friends and, obviously, The Circle. 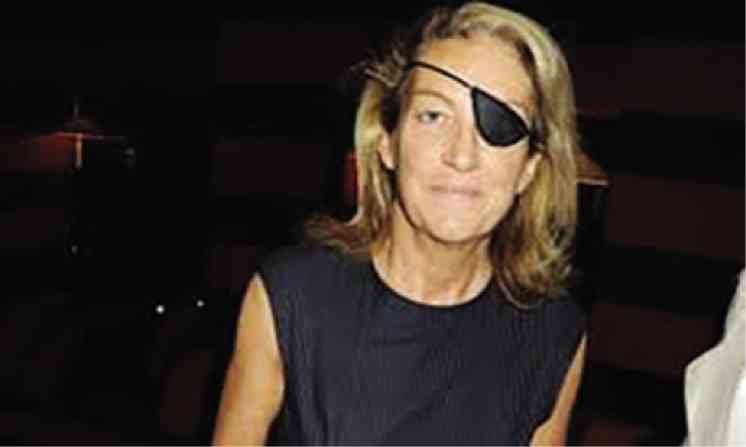 We were all devastated by that, never thinking that maybe I might be given the opportunity to reconnect with her in this way, to honor her. And really honoring the fact that Marie was a person who witnessed horror and injustice.

As a human being, she was drawn to that, to go to these darkest of dark places with her cameraman to witness, so that she could say to the world, look, this is the story, the truth, what’s happening, here’s the photograph, here it is.

I think what Marie would want from “A Private War” is, obviously it not only focuses on her life, but it would be more about the witnessing of the horrors that she has seen and the stories that she wanted to tell.

What made you feel like not writing songs anymore? I have written a song now, so I have done that. But do I want to continue? I don’t know.

What really makes my blood rush is being a global feminist. Being an advocate and a campaigner has been where my passion has been for many years now.

Maybe you saw me wearing my HIV positive T-shirt. I was trying to appeal to the media (laughs), to appeal to the job that you do, to the power that you have to tell people about the HIV/AIDS pandemic as it affects women and girls.

What are your fears? Huge. I have lived with panic attacks, anxiety and depression—haven’t we all? Going onstage, I was always terrified. I was lying in bed every night after a show, going through every single lyric, line and song I had sung, before I could put myself to sleep. Because I am a perfectionist and I had to soothe myself down and say, OK, and now I can sleep.

And on the day of the gig, I think, how is my voice and am I fit to do this? Because in those days, I was onstage for over two hours, and it was all singing and dancing, night after night.

Those songs aren’t easy to sing. They are challenging. So, living on the road or acting, or doing anything that is so strenuous physically and mentally, is very frightening because you are anxious that you’re going to lose it.

Then, later on in life, because I had to overcome a few things in my life, I decided to f**k it. That is my mantra—f**k it, (laughs). It’s just about breathing, letting go and saying, whatever, surrendering to whatever you have to do, and it’s OK.

Don’t you miss performing? I just did it, not that long ago. I do not miss going on the road.

Occasionally, I do something for a purpose. Usually, it’s to raise money for something, not for me so much.

But at one point in your life, you needed to perform. It wasn’t even that I needed it.

I am 64 (she turns that age on Dec. 25). I have had two children, and I have raised them. I have been a divorcée. I have been a single mother. I have done a lot of stuff.

And I am so privileged. Why? Because I can choose it. I don’t have to do anything unless I feel it’s appropriate.

This song is like, I have to do this song. That’s how I felt. What a privilege. I was so honored to even have the opportunity. I was like, Marie, this is for you. That was how I felt.

I must have heard “Sweet Dreams” a million times. Oh, how sickening (laughs).

Every time, you have to pretend, oh, I never sang this song before … It’s so crazy.

The line, “Sweet dreams are made of this,” is completely self-deprecating. It’s like everybody has a motivation in his or her life, something that people want to achieve.

“I travel the world and the seven seas.” It’s global—“everybody is looking for something.” That is a fundamental truth. It’s philosophical.

People identify with it and interpret it in different ways. Some of them think it’s a big celebration…

When you look back, what thoughts come to mind? It’s a weird thing. When you are young, your life is ahead of you and you don’t know what it’s going to be.

So, looking back, I don’t have this horizon anymore. But now, I have what happened in my narrative curve as we all do.