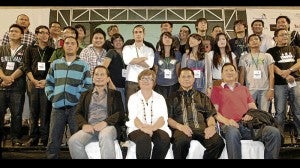 The 7TH Cinemalaya Philippine Independent Film Festival, which runs July 16-24 at the Cultural Center of the Philippines (CCP) promises more treats for its growing audience.

This year, for the first time, films from eight neighboring Asian countries will be screened, festival director Nes Jardin announced on Wednesday. He said this would also be an opportunity to study indie filmmaking trends in the region.

Cinemalaya has invited filmmakers from China, Indonesia, Japan, Korea, Malaysia, Singapore, Thailand and Vietnam to participate in a section called Focus Asia, Jardin said at a media gathering held at the CCP.

“This would likewise give our filmmakers the chance to network with foreign directors and festival programmers,” Jardin told Inquirer Entertainment. However, he added that bringing in a large foreign entourage would require additional funding: “We need to provide for their airfare and hotel accommodations. So far, half of them have confirmed they are coming.”

Jardin also reported that the Movie and Television Review and Classification Board (MTRCB) has agreed to give “rating exemptions” to Cinemalaya films that will be screened at the Greenbelt 3 Cinemas in Makati City – an additional venue for the week-long festival.

Filmmaker and Cinemalaya organizing committee head Laurice Guillen pointed out that the inclusion of Greenbelt Cinemas was needed to augment screening venues, especially since the festival has added two new sections – aside from Focus Asia, the Cinemalaya Documentary.

“We thought of decreasing the number of screenings of the competing films, but that would be counterproductive. Luckily, Greenbelt agreed [to participate],” said Guillen.

Jardin added that, depending on this year’s box-office returns, Cinemalaya will add another venue next year in Quezon City. “We want to reach as many people as possible,” he said.

The finalists each received a seed grant of P500,000 from the Cinemalaya Foundation. The winner of Best Film will receive P200,000 cash and the Balanghai trophy. This category is open to Filipino filmmakers who have not yet directed more than three full feature films.

The 10 finalists in the Short Feature category are: “Debut” by Pamela Llanes Reyes, “Every Other Time” by Gino M. Santos, “Hanapbuhay” by Henry Frejas, “Hazard by Mikhail Red, “Immanuel” by Gabriel Puyat, “Niño Bonito” by Rommel Tolentino, “Oliver’s Apartment” by Misha Balangue, “Samarito” by Rafael Santos, “Un Diutay Mundo” by Ana Carlyn Lim, and “Walang Katapusang Kwarto” by Emerson Reyes. The winner of this category will get P100,000 cash and the Balanghai trophy.

“Busong” was featured in the Director’s Fortnight section of the recently concluded Cannes International Film Festival in France.

Guillen explained that, as a rule, Cinemalaya only features debuting films but has given exemptions to those invited to Cannes: “This is only because Cannes is held before Cinemalaya, and it’s not only an honor for the director but also for the country,” she added.

Jardin said the Cinemalaya Documentary, with professor-filmmaker Clodualdo del Mundo Jr. as curator, offers “a hefty and more substantial helping of films on various aspects of Philippine life and society.”

The Retrospective, an annual section in the Cinemalaya, will feature works of the late National Artist for Film Fernando Poe Jr.

The Philippine Premiere, the section where the Netpac (Network for the Promotion of Asian Cinema) Award is given, will feature eight debuting films. There will also be a section for children, Kid’s Treat, and Ani, which will feature the best indie films produced locally during the last 12 months.

“There will also be special screenings and gala events for some of the films,” Jardin reported. “We have invited Quark Henares’ ‘Rakenrol’ and the Nestlé ‘Kasambuhay’ short films.”

The festival opens July 15 with a 6 p.m. ceremony to be held at the CCP Main Lobby. Guillen’s “Maskara” will be the opening film. “It is an in-depth commentary of the Philippine film industry as seen from the eyes of an actor who just died,” Jardin said of “Maskara.”

The festival concludes with an awards ceremony on July 24 at the CCP Main Theater (Tanghalang Nicanor Abelardo). For its promotional teaser, Cinemalaya has adopted the theme “See the Unseen” – “since indie films are about stories we don’t normally see on mainstream cinema like truth, despair, freedom, splendor, nostalgia and passion,” said Jardin.