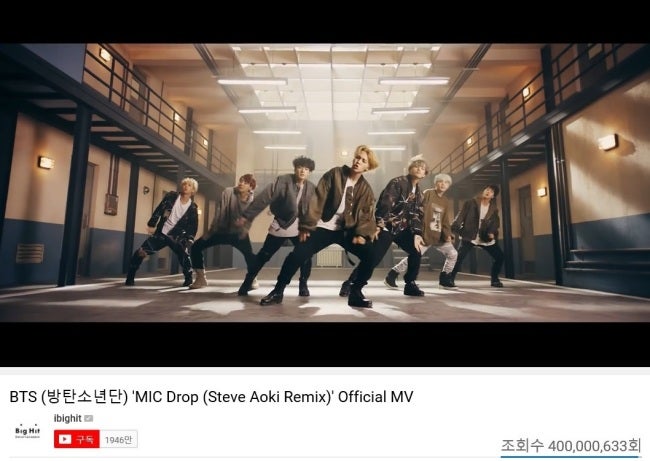 SEOUL — BTS has left yet another mark in Korea’s music history, as its music video for “Mic Drop (Steve Aoki Remix)” has become its fifth video to surpass 400 million views on YouTube, the most for any artist in the country.

As of 11:09 a.m. Sunday, the remixed version of the megahit had hit the milestone, a little over a year after its initial 2017 November release. As of now, the boy band has five songs with over 400 million views, including “DNA,” “Fire,” “Dope” and “Fake Love.”

The most-viewed video made by any Korean continues to be Psy’s “Gangnam Style,” with a whopping 3.2 billion views to date.

“Mic Drop (Steve Aoki Remix)” is a remixed version of the song that was originally released in September 2017, off the album “Love Yourself: Her.” The song featuring the popular US DJ peaked at No. 28 on the US Billboard Hot 100.

Comprising seven members, BTS is among the most popular and influential groups in the country. It is also arguably the most successful case of a global fan base being established for a Korean act, with fans from across the world joining forces via social media under the flag of Army.