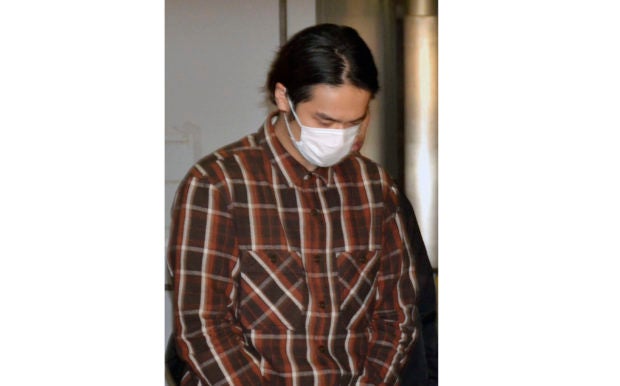 In this Nov. 28, 2018, photo, Chinese actor Jiang Jinfu is transported from a police station in Tokyo. Japanese police said Friday, Nov. 30 they have arrested the Chinese actor on suspicion of assaulting his former girlfriend, causing her injuries. Image: Kyodo News via AP

TOKYO (AP) — Japanese police said Friday they have arrested a Chinese actor on suspicion of assaulting his former girlfriend, causing her injuries.

Jiang Jinfu, 27, was detained on Wednesday when he turned himself in to a downtown Tokyo police station. Police already had an arrest warrant for him after the 25-year-old woman filed a complaint over the alleged assault, prompting an investigation.

According to police, Jiang allegedly beat her in the face, arms and shoulders on Oct. 12, causing injuries that required a monthlong treatment. The couple lived together at his apartment at the time but then apparently broke up, police said.

Jiang admitted to hitting the woman, police said, describing it as domestic violence. Japanese media said he has been in Tokyo since April to study Japanese.

Read Next
Sharon Cuneta to star in an Erik Matti horror film
EDITORS' PICK
New Year, New Rediscoveries
WHO says fabric facemasks still work against virus variants
1,797 more Covid-19 infections raise PH active cases to 33,603
UP president challenges AFP claim on Reds’ campus infiltration
Is your company a growth champion? Stand up and be recognized!
Acer Philippines welcomes you to its first flagship store
MOST READ
Wife stabs husband after seeing her younger self in old photos, thought he was cheating
NBI files raps vs top execs of 2 tech firms
Ate Vi’s message to those against ABS-CBN’s franchise renewal
UK Covid-19 variant already detected in PH as early as Dec. 10, says expert
Don't miss out on the latest news and information.