Diego Luna happy to go back to a galaxy far, far away 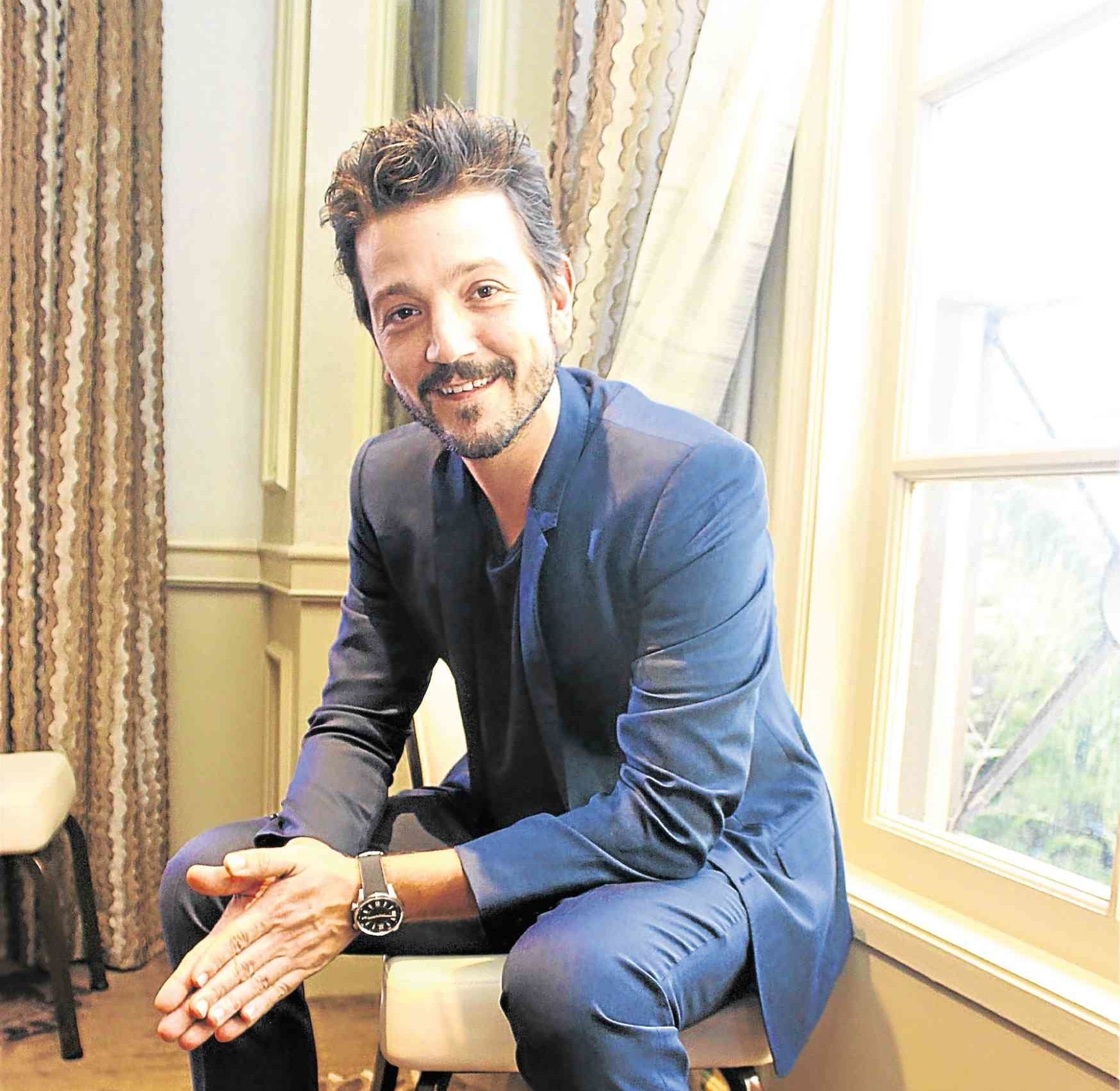 LOS ANGELES—Diego Luna is excited to be returning as Cassian Andor in a galaxy far, far away in a yet untitled “Star Wars” TV series.

In the live-action spy thriller by Lucasfilm for Disney’s online streaming service (Disney+), the actor will reprise his role from the movie, “Rogue One: A Star Wars Story.”

In the meantime, Diego costars with Michael Peña and Alyssa Diaz in Netflix’s “Narcos: Mexico.” He has completed several movies, including Woody Allen’s “A Rainy Day in New York” and “Berlin, I Love You.”

And somehow, the Toluca, Mexico native found time to do a small role as a waiter, Pedrocito, in “If Beale Street Could Talk,” Barry Jenkins’ first film since winning the 2017 Oscar best director and best adapted screenplay honors for “Moonlight,” which also won the best picture prize.

Based on the late James Baldwin’s novel of the same name, “If Beale Street Could Talk” narrates how a young woman (Kiki Layne) scrambles to prove the innocence of her jailed fiancé (Stephan James) while coping with the pregnancy of their first child.

Are you happy to be going back to a galaxy far, far away? I’m happy to go back to the galaxy far, far, away. It’s a dream come true. I’ll tell you how it felt. I was the coolest dad (laughs) when I told my kids I was doing that film (“Rogue One: A Star Wars Story”).

When my son, who is the one who connects the most with this universe, was watching the film, he went, “My dad is the best!”

You are busy with several film and TV projects. Have opportunities improved for Latino actors? It’s good times for us. I was talking about inclusion recently. It’s not that we should be doing the films that others were doing before.

It’s that we should be telling our stories. And our stories should matter. Audiences today are interested in accuracy, in honest stories about people who actually exist and contexts that are real.

Today, audiences are shaping the industry, and they have a voice that we are listening to. So yes, things have changed, not just for our community, but for every community to be represented in film.

Is that your choice, to go from one small role, as in “If Beale Street Could Talk,” to a lead role in “Narcos: Mexico”? I’m just glad I can jump from one thing to another. This (“Beale Street”) is the most amazing project because I was shooting “Narcos” in Mexico and doing theater on weekends. I had Monday and Tuesday off in the schedule of “Narcos” and the play.

Then, Barry Jenkins asked me to do “Beale Street.” He said, “I don’t know if you’re going to want to do this because it’s literally just two day’s work.”

I go, “It’s perfect. It’s the only thing I could do, in fact (laughs). If it can happen this Monday and Tuesday, I’m in.” Because I love Barry’s work. When I met him, we seemed to connect.

How do you adjust from big starring roles to a small but nice role in “Beale Street”? I feel closer to this because I’ve been always near a bar (laughs), either on one side or the other, but it feels like home.

This thing of such natural performances, it’s all because of Barry’s work and the way he approaches the work with actors.

The love you feel on set—there’s no pressure. It’s difficult to find that. That’s always set by the director. He sets the rules and that’s why Barry gets these performances from everyone who are so full of warmth. You actually get to see through the eyes of the characters. So Barry is to be blamed for that (laughs).

How did Barry Jenkins offer this role to you? I was shooting in New York, and Barry invited me for a quick breakfast or lunch … I think. We sat down, talked for 10 minutes. I was there just to tell him, “Yes, I want to do whatever you’re doing next.” But he started talking about “Y Tu Mama Tambien,” what it meant to him.

He was curious about the play I was doing in Mexico. We talked about “Narcos” because I had been shooting for quite a while. We talked obviously about “Rogue One.”

I don’t think he had to do anything to convince me. I was convinced already. In fact, it made me feel proud to be part of “If Beale Street Could Talk” because even though it’s based on a book (James Baldwin’s novel of the same name) written in the ’70s, it’s so pertinent to tell this story.

I recently saw a documentary about a Mexican who was in jail for no reason. It’s important to remind us that these stories are still happening, and that we have to be loud and ask for inclusion in every sense.

Speaking of “Y Tu Mama Tambien,” do people still approach you about that film? I do think it’s a break point in my career and very important for Mexican cinema and filmmakers. What “Amores Perros” first did, then “Y Tu Mama Tambien” was opening the doors for so much talent coming out of, not just Mexico, but of Latin America, as well.

Because for many, not just this country, the only cinema they were seeing that time in our language was Almodovar.

It was nice to be part of that movement. And personally, the relation with Alfonso Cuaron (“Y Tu Mama Tambien” director), the family I made, and the decisions I made in making that movie changed my life. That got me here talking to you.

And I got to have the chance to choose what films I want to do and where. And it’s nice that the one film that people remember the most is that one little film (“Y Tu Mama Tambien”) we shot in Mexico, in Spanish. We were just trying to tell a specific story.

The secret of Alfonso, and I guess of great filmmakers, is that when they’re telling the story, they’re just thinking about the story.

Then, if they’re honest with the way they approach the story, people will care about it. But if you’re thinking about reaching audiences, then you just fail.