Combs, other celebs say goodbye to Kim Porter with fireworks 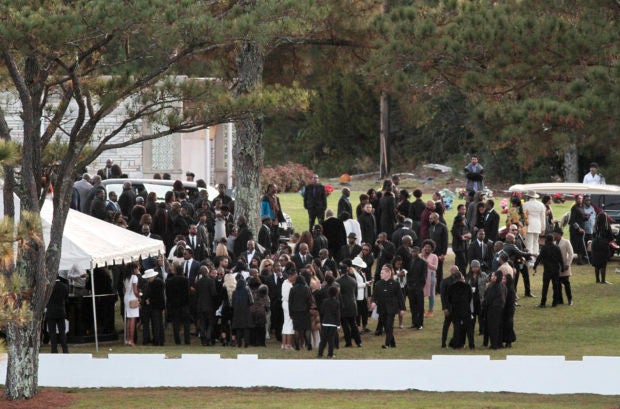 Mourners attend funeral services and interment for former model and actress Kim Porter at Evergreen Memorial Gardens Saturday, Nov. 24, 2018, in Columbus, Ga. Columbus-born Porter was the longtime former girlfriend of Sean “Diddy” Combs and the mother of three of Combs’ children. Porter also has a son, actor-singer Quincy Brown, from a previous relationship with R&B singer Al B. Sure! She died unexpectedly last week at age 47. Image: Ledger-Inquirer/Robin Trimarchi via AP

The funeral was held Saturday in Porter’s hometown of Columbus, Georgia, at a megachurch that can seat 2,500.

The Ledger-Enquirer reported that along with Combs, record producer Russell Simmons, artists Usher, Mary J. Blige, Lil’ Kim, Mase, Faith Evans and Yolanda Adams were all at the service, which ended with fireworks

Porter was an actress and model and the mother of three of Combs’ children. She was buried in the same cemetery as her mother.

Porter was found dead in her Los Angeles home on Nov. 15. She was 47. Authorities have not released a cause of death. CC

Kim Porter’s family remember her as ‘a special angel’