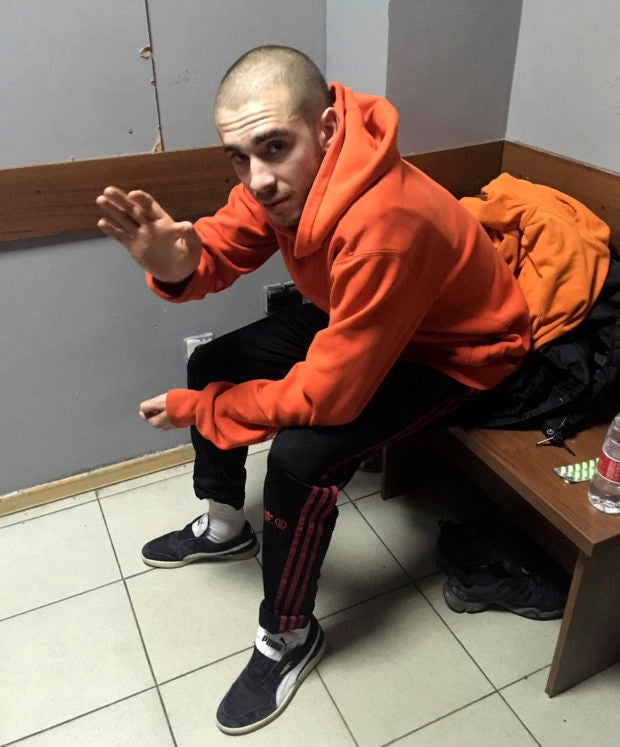 In this photo taken by Alexey Avanesyan, Alexander Kuznetsov, Russian rapper also known as Husky gestures as he waits for a court hearing in Krasnodar, Russia, Thursday, Nov. 22, 2018. The Russian rapper is facing two weeks in jail for performing on a car after prosecutors banned his gig for going against the government. Image: AP/Alexander Avanesyan

MOSCOW (AP) — A popular Russian rapper was sentenced Thursday to 12 days in jail for performing on a car after prosecutors banned his gig.

Husky, who has a wide following among young Russians with his videos scoring up to 6 million views on YouTube, was arrested Wednesday. A court in the southern city of Krasnodar sentenced Husky on charges of hooliganism.

The 25-year-old rapper, known for his songs mocking authorities and police brutality, was due to perform in Krasnodar when local prosecutors warned the venue that his act had elements of what they termed “extremism.”

Russian authorities have in recent years used the vaguely worded law on extremism to go after Kremlin critics and dissenters.

Wednesday’s gig was moved to another club, where the power was shut off and Husky’s fans poured outside. Videos posted online showed the rapper, whose real name is Dmitry Kuznetsov, reading his verses on top of a car with the fans chanting in unison.

Police officers let him finish the song and then detained him, but had trouble driving away as crowds of fans blocked the police vehicle, demanding his release. Police eventually persuaded them to disperse.

Local police also said that the owner of the car on which Husky performed filed a complaint for property damage, a charge that may carry a longer prison term. It wasn’t immediately clear if authorities were going to press those charges.

The rapper told the court that he was forced to perform on the street because his concert had been canceled without explanation. He said he was willing to pay compensation for any damage to the vehicle.

“I acted in such a way because I faced a situation when I felt an obligation to talk to the people who had bought tickets,” he told the court.

Husky’s black-and-white videos mock a political regime that expects tacit compliance from its citizens. A new wave of Russian rap musicians is widely credited for channeling young Russians’ frustration with the political system and lack of economic prospects.

Authorities in other Russian regions have also moved to ban Husky’s gigs.

Husky said in a social media post last month that officials in several Russian cities are pressuring venues to shut down his shows because his songs allegedly offend Christian believers and promote promiscuity. CC

Read Next
A delicious, vicious acting feast in ‘The Favourite’ — a film review
EDITORS' PICK
Beyond water service: Maynilad builds massive infrastructure projects to clean up Metro Manila waterways
SM continues to send relief assistance to remote towns in Batangas
PH preps for China virus: Question of when, not if
Seventh judge assigned to handle De Lima case
Museums ‘put to sleep,’ churches closed amid volcano’s unrest
Get exciting deals and discounts when you download the new McDonald’s App
MOST READ
Lacson on Duterte’s threat to end VFA over Bato’s canceled visa: Where is the connection?
Part of Aurora Boulevard in Cubao closed from Jan. 25 – Feb. 1
The humiliating experience that changed Nash’s perception of soldiers
Corruption worsens: PH falls 14 notches to 113th spot in global index 2019
Don't miss out on the latest news and information.