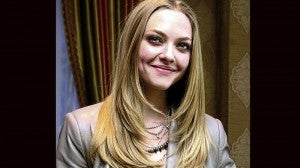 LOS ANGELES—“From playing Linda Lovelace to Cosette is drastic but that’s the point,” Amanda Seyfried said of her challenging roles this year.

Amanda, wearing a caramel brown leather jacket, arrived looking distracted. “I am just in a daze,” she explained. “It’s weird.” It’s probably because the 26-year-old was recovering from what she said was the hardest role in her life.

But make no mistake— she’s relishing this chapter of her career. In April, she starts playing a completely different character from Lovelace— Cosette, the waif in Victor Hugo’s “Les Miserables,” a movie adaptation of one of the most successful musicals.

Asked how “Lovelace” depicts the sexual act that made “Deep Throat” a sensation in 1972, Amanda replied, “I do simulate it but you can’t really see it. You can’t show an erect penis in ‘R’-rated movies. It was clear-cut what we wanted to convey before we started shooting the movie. It starts when she first meets Chuck Traynor, which was what ended up ruining her life. Linda was 20 when she met him. She shot ‘Deep Throat’ when she was 21. We go through their whole marriage and how abusive he was. It never goes as dark as it really was. The movie ends in the 1980s, when she’s in her 30s and married with two children.”

“She was really troubled,” Amanda described Lovelace, who died in 2002. “I read her autobiographies. They were difficult to read because they are dark. What she had to go through was insane. I also watched a lot of footage. We reenacted her Phil Donahue show guest appearance and when she was on the panel of the Meese Commission and she spoke against pornography. There was so much background material available to me. I’m really lucky. It was less daunting to play the role that way.”

Amanda said she plays Lovelace when the latter was “20 to 32. There was a lot going on there in her physical appearance between those ages. A lot of life was lived in those years so she appears much older in the end. I had to wear makeup like Playtex on my face to appear older. It’s interesting to find a physical way to convey that she’s older. She was so jaded by that time that she had a completely different way of expressing herself.”

Amanda added, “She was very despondent in her marriage—abused physically, verbally and sexually. It made for a very strange dynamic between her and her captor, her husband. There was a bit of a Stockholm Syndrome in there. She was able to overcome that. She found a lot of confidence so it was almost like playing two different people. She became a great mother and finally found some peace.”

On whether she had hesitation in accepting the role, Amanda was firm: “No. I’m really lucky I got to step into her shoes, shoot the movie and become her for two months. Her story will live forever. Hopefully, we were able to tell her story the way we wanted to because people didn’t really know her.”

“Cosette is a dream role,” she gushed. “I was playing Cosette in recitals when I was 15. I sang ‘A Heart Full of Love.’ When I first saw ‘Les Miz’ in Philadelphia, I was 11. ‘Les Miz’ could be gruesome but as an 11-year-old, you can still connect to it because of the music. The musical is such a part of why I became a singer. My career is like a really weird circle because now I’m in the hands of Cameron Mackintosh.”

The star stressed that she worked hard to land the role. “We spent months and months of training, auditioning and re-auditioning,” she said. “We fought so hard. We’re really happy.”

When we asked Amanda if the cast would really sing live while shooting the movie, she smiled and said, “Yeah, can you believe it? Singing live is a great idea and I hope it works. It’s weird when you’re acting in a drama and then you start singing. The music works for that. But sometimes when the music is prerecorded and you’re lip-synching, it’s obvious. Tom Hooper doesn’t want any of that. I’m singing and training constantly now that I wrapped my (‘Lovelace’) movie. I have Skype time with my voice coach in New York. I do it every day. I’m also taking a lot of herbs to keep myself healthy because once you lose your voice, you don’t get it back for two or three weeks. It’s a really physical thing.”

The actress who proved her vocal chops in “Mamma Mia!” said, “Getting back into singing has been really tough but it’s awesome. I didn’t lose what I had when I was 15. It’s only gotten better so that’s a plus.”