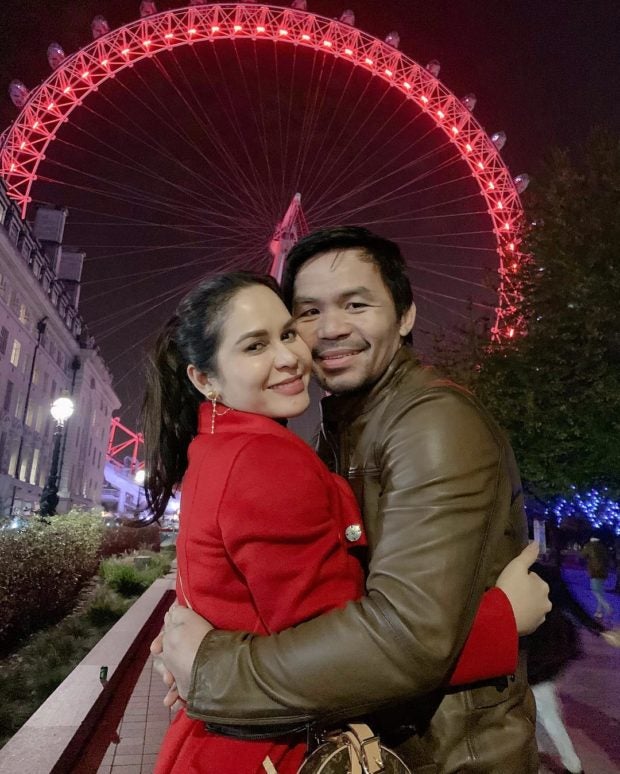 Jinkee Pacquiao is proving business can be mixed with pleasure as she makes the United Kingdom her own fashion runway.

Jinkee joined her husband Senator Manny Pacquiao in his trip to give a talk to the students of Oxford and Cambridge Universities on Nov. 5 and 6. But just because their U.K. trip is of a business nature does not mean they cannot have a good time — for Jinkee, it is the perfect opportunity to explore and immerse herself in one of the fashion capitals of the world.

She started her morning right with a hearty breakfast while looking out at the Instagram-worthy view of their hotel room.

Jinkee is a lady in red with her matching cherry red scarf, coat and high-heeled boots. To provide a nice contrast to her bright ensemble, she donned a black newsboy cap and pants.

Pacquiao, probably inspired by his fashionable wife, sported an all-brown getup. Together, the two attempted to recreate a scene in the classic romantic comedy film “When Harry Met Sally”.

Sticking to her monochrome theme, Jinkee wore an all-white suit during Pacquiao’s talk at Oxford University.

For Pacquiao’s Cambridge speech, on the other hand, Jinkee opted for a playful mix of browns and blacks with her newsboy cap, sweatshirt, pants, boots and bag.

While exploring London, Jinkee put her best foot forward with a canary yellow coat she paired with black pants and boots, and brown bag. The wife of Pacquiao visited Les Senteurs, the city’s oldest independent perfumery.

She also had a good time admiring autumn.

In her canary yellow coat, Jinkee is easily noticeable in the pastel pink and floral facade of Peggy Porschen Cakes.