NEW YORK – Whitney Houston’s downfall was so long and sad that, in an impatient public’s mind, it overshadowed her many accomplishments. 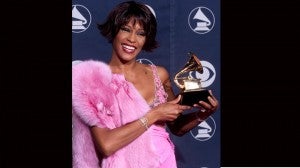 Dated February 23, 2000 files photo shows US singer Whitney Houston holding her Grammy award for Best Female Rythm and Blues Vocal Performance for "It's Not Right but It's Okay" at the 42nd Annual Grammy Awards at the Staples Center in Los Angeles. Grammy-winning pop legend and actress Whitney Houston was found dead Saturday in a Beverly Hills hotel, police said. She was 48, her publicist confirmed. AFP FILE PHOTO

Those achievements can be checked off easily in numbers — Grammy Awards, records sold, the string of seven consecutive No. 1 singles. Yet if there’s any solace to her passing, it is that people will revisit recordings, videos and films to rediscover the majesty of her work.

Look up the video for one of those hits, “I Wanna Dance With Somebody (Who Loves Me).” The arrangement and instrumentation — cheesy synthesizers, booming drums — date the recording immediately in the late 1980s.

It’s a pop confection that could have been sung by any singer who might have been forgotten in a couple of years. Houston lifted it above the average with a voice that could just as easily be found on a gospel record or opera stage. She danced through it with a bearing that made you think of Michael Jordan stopping off at a schoolyard basketball game, knowing that she had far more talent than anyone around her.

The daughter of Cissy Houston and cousin of Dionne Warwick, Houston had talent that surpassed each of them. Her godmother was Aretha Franklin — how’s that for pressure? — But in her prime, Houston’s voice could match the Queen of Soul’s.

“Didn’t We Almost Have It All” and “How Will I Know” were other standouts, evidence that Houston could master balladry and up-tempo songs. She was one of longtime music executive Clive Davis’ greatest signings, and although Davis may not have challenged Houston enough, he at least put her in a position to shine.

Anyone who saw Houston perform “The Star Spangled Banner” before the 1991 Super Bowl will always remember it.

The 1992 film “The Bodyguard” and its soundtrack will remain her signature achievement. She portrayed a superstar singer, alternatively tough and vulnerable, guarded by a former Secret Service agent played by Kevin Costner. For the soundtrack, she took a little-known Dolly Parton song, “I Will Always Love You,” and made it her own. And then some.

Again, there are the kudos — it won the Grammy Award for record of the year. The performance itself was remarkable. Houston’s voice soared with the power of a jet engine and kept perfect tone for the quieter, tender moments. Every artist has a defining song; if they’re lucky, it also shows the peak of their powers.

The hits didn’t dry up immediately, but they became less frequent. Her marriage to singer Bobby Brown was ill-fated and she descended into drug abuse.

In September 1997, I had an interview scheduled with Houston as she was promoting a concert being televised on HBO. It was by phone, but the appointed hour of her call came and went. No Houston.

The next day a huge floral arrangement was delivered to The Associated Press office addressed to me with a note of apology attributed to Houston. When the interview was rescheduled, I thanked her for the arrangement and said it wasn’t necessary. She had no idea what I was talking about.

One suspect is there were many years and many other examples of instances like that, of covering Houston’s tracks as she became increasingly unreliable. The years of abuse took a terrible toll on her talent. She made a comeback in 2009 with a “Good Morning America” concert that was sad to watch. She went through the motions and played hard to the crowd, but her voice could no longer hit the notes that once seemed effortless.

During that 1997 interview, Houston deflected talk about a life and marriage that was already clearly troubled.

“My life doesn’t go on record. My voice does.”

It is the only thing to be thankful for with this sad story.