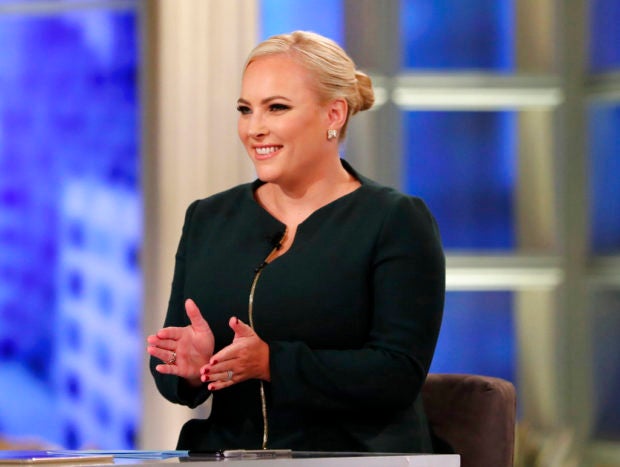 This image released by ABC shows co-host Meghan McCain who returned to “The View,” in New York, Monday, Oct. 8, 2018, since the death of her father. Sen. John McCain in August. She thanked viewers and her colleagues for their support. Image: Lou Rocco/ABC via AP

NEW YORK — Keeping a box of tissues handy, Meghan McCain returned to “The View” on Monday for the first time since the August death of her father, Sen. John McCain.

She thanked viewers and her co-hosts for their kindness and support.

“It made me so inspired that the idealism that my father espoused for his career are the ideals of America,” she said. “There has been a lot of talk about whether that died with him, and I’m here to tell you, it didn’t.”

McCain was misty-eyed upon her return to the daytime talk show but largely kept it together. She has attracted attention for her work on “The View” the past year, particularly since she is often a political minority of one and occasionally has to defend a president her father had little use for.

She hugged Whoopi Goldberg and said, “My father loved you, he really loved you.”

She said Americans should never surrender to what is happening in the country right now.

“I understand how divided and how scared a lot of people are right now and it looks like the fabric of democracy is fraying,” she said. “Do not surrender.”

Somewhat uncharacteristically, McCain stayed out of the first “hot topic” discussion on the talk show, about the Senate confirmation of Justice Brett Kavanaugh over the weekend. She did endorse women speaking up politically when Taylor Swift’s recent social media post supporting a Democratic Senate candidate from Tennessee was brought up.

McCain’s frequent verbal sparring partner, Joy Behar, is off this week, but McCain saluted her, too. Co-host Sunny Hostin mentioned that Behar had an arduous 14-hour trip to attend the memorial service for McCain’s father.
“She’s 75 years old,” Hostin said.

Meghan McCain a feisty new presence on ‘The View’