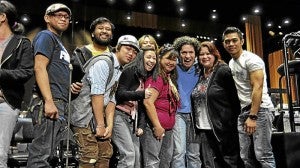 GUSTAVO Dudamel (third from right), the brilliant Venezuelan who’s been taking the classical music world by storm since he took over as music director of the Los Angeles Philharmonic, with some members of the Philippine Chamber Singers-Los Angeles.

LOS ANGELES – In what was described as the largest production ever by the Los Angeles Philharmonic and one of the world’s biggest stagings of Gustav Mahler’s Symphony no. 8, also known as the “Symphony of a Thousand,” the Philippines was well represented.

The Philippine Chamber Singers-Los Angeles (PCS-LA), proudly clad in costumes from different regions of the homeland, was part of a huge gathering of performers rounded up to do justice to Mahler’s epic symphony last Feb. 4 at the Shrine Auditorium, former home of the Academy Awards shows. The concert was sold out several weeks in advance, but we were fortunate to be invited to the morning dress rehearsal on the day of the show.

Gustavo Dudamel, the brilliant, curly-haired “rock star” attraction of the LA Phil since he became its music director in 2009, conducted 800-plus chorus members, eight vocal soloists and about 200 musicians (the latter from the LA Phil and the Simon Bolivar Symphony Orchestra of Venezuela.

In his review, Los Angeles Times music critic Mark Swed wrote: “The chorus—drawn from 18 professional and amateur groups throughout Southern California and rehearsed by the Los Angeles Master Chorale music director Grant Gershon —was remarkably disciplined. There was no possibility this many singers in a dry, dull acoustic would be able to suggest contrapuntal transparency or enunciate words intelligibly. But along with the sheer splendor of the big moments when 800 voices sang as a rapt one, this was a more etched and variegated ensemble than we probably had any right to expect… The ecstasy in Mahler’s Eighth is not to be channeled through the ears alone but is a feast for our many senses and sensibilities. To that end, the Shrine and the thousands it held proved a properly stupendous space for imagining the whole universe ringing and resounding.”

Below are excerpts of our e-mail interview with some members of the PCS-LA: 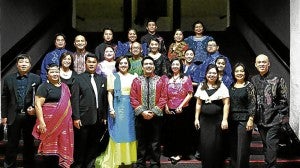 THE PHILIPPINE Chamber Singers-Los Angeles, led by its artistic director Gelo Francisco (center, front row), had the honor of representing the Philippines in the LA Philharmonic’s recent “Symphony of a Thousand” at the Shrine Auditorium, a rare instance of Gustav Mahler’s Symphony No. 8 being performed on the grand scale that the composer intended.

How did the Philippine Chamber Singers get invited to this historic concert?

Gelo Francisco (G): We were invited by the LA Phil’s Kathie Freeman who was in charge of the choirs for this project. PCS is already in the LA Phil’s roster of choirs from Maestro Dudamel’s inaugural concert at the Hollywood Bowl.

What are your impressions of Gustavo Dudamel as an artist, and if you can provide a glimpse of the man behind the artist?

G: Dudamel is the real thing! He was a violinist before he became a conductor. His being a virtuoso makes him an effective director. He knows what he wants and how to make his musicians/singers understand. They respond by giving him exactly what he requires musically.

Apple Nazareno (A): I found Gustavo Dudamel very humble. For someone so big in the music world, he has no airs. During the first rehearsal, the first thing he said was, “I apologize. I am very tired right now.” Yet the minute we started, he was right on with every cue. The only indication of his tiredness was when he leaned on the music stand.

In one rehearsal at the Shrine, I found the guts to ask to take his picture. He was very accommodating; the more I was awestruck. He made us laugh with the expressions on his face and his gestures.

He had the orchestra and the chorus under control. When he spoke, everyone listened. He was electrifying. I would sometimes find myself just watching him.

He amazes me; he knows the whole symphony in his head.

Emmanuel Miranda (E): Maestro Gustavo is a gifted musician. A violinist at an early age, he was musically educated through the “El Sistema” (a system of youth orchestras) in Venezuela. Leaders of this institution recognized his talent and nurtured it.

Christine Macalalad (C): He’s very down-to-earth. He’s like a friend you want to hang out with, who just happens to be a genius and can handle 1,000-plus musicians on stage. He works hard at his music.

He was making you guys laugh during the tech rehearsal.

G: He liked to use metaphors and his life experiences. He was very comfortable laughing at himself. He joked about being a frustrated singer. When he was a young boy, he said, his friends were in the choir. He auditioned, but didn’t make it. It was evident to us that he is a grounded person. He knows who he is and what he is capable of. Very humble! He likes to use humor to get your attention and discreetly injects instructions, making the learning experience a delight.

What was it like singing with 800-plus choir members?

G: Singing with some, if not all, of the finest choirs LA has to offer was a phenomenon for me, but also a sign of good things to come from the LA Phil and from Dudamel because they had the community in mind for a project like this.

The event gave me goose bumps as we were singing the first part, “Veni Creator Spiritus” (Come creator spirit). Toward the end, I was trembling all over because the intensity was almost unbearable. You just had to endure it while savoring it at the same time. And then, euphoria in the end!

A: There were about 819 singers—811 choristers and 8 soloists. I found myself privileged to be one of the 819. My first concern was, how were we all going to fit? The people at LA Phil made it happen.

E: I am not new to singing with a large number of singers, but this mammoth project was awesome.

C: Phenomenal! You are introduced to various choral groups, meet wonderful people and are inspired by wonderful talents. At the same time, it was a little nerve-wracking because I was representing a group and Mahler’s Eighth is a very hard piece of choral music. Working with LA Master Chorale’s Grant Gershon was enlightening.

E: I commend the people behind this collaborative project.

C: We did not mingle that much because we were on separate spaces backstage. I would have loved to meet some of the Bolivars, who are just amazing musicians. But onstage, that’s where the interaction was.

The logistics to have about a thousand plus singers and musicians must have been staggering.

G: Thanks to Kathie Freeman, the choral wrangler! She made everything function like a well-oiled machine.

A: Logistically, it did not seem possible. The assembly comprised of about 15 different choirs—some professional, others amateur. The choirs were split into three groups; choir 1, choir 2 and the children’s choir. PCS was originally supposed to sing as part of choir 2 but was later reclassified to choir 1. The rehearsals were based on the groupings. For example, all choirs in the first group rehearsed with Grant

Gershon one evening; the following evening it was the children’s choir, and then it was the choirs in the second group.

The whole group sang together at a church in Pasadena which holds 800-plus people. We had rehearsals in four different venues. We did not get to work with the orchestra until we started rehearsals at the Shrine on Feb. 1. Kathie Freeman did a great job of getting us in line.

What were the fun moments?

A: I cannot single out one moment when we were not having fun.

E: Seeing friends and colleagues from all over and reconnecting with them.

C: I enjoyed rehearsing at these wonderful places—Lake Church in Pasadena, the Dorothy Chandler Pavilion , the Walt Disney Concert Hall and the Shrine. Like most Filipinos, I love to take pictures. I was constantly on the lookout for the opportunity to have that valuable snapshot with Dudamel. It was impossible for him to pose with all of us because he is a busy man. But he is a “rock star” and we are his fans, so on breaks and every chance we got, we sought him out, even if it meant virtually stalking the guy.

What are your best memories of this entire experience?

G: The fact that everyone was bound by the music. The most memorable moment for me was realizing that I was actually making music with 1,000-plus people. That felt really good. It was then that I felt peace was achievable in this world and in this lifetime.

A: When you guys, as an audience, gave us a standing ovation. When all the singers stopped singing and all the instruments stopped playing, all that was heard was the applause of about 6,000 people at the Shrine for about 20 minutes! I felt proud for myself and for the group that I represented. As the only Filipino group in the show, we decided to represent the Philippines by wearing costumes from different regions of our homeland.

C: I started getting goose bumps even during the rehearsals at the Walt Disney Concert Hall and the Shrine. When I saw my name on the seating list, it all sank in. To do Mahler’s Eighth is a once-in-a-lifetime experience for every chorister, and something this grand made it even more special. But the most memorable for me was at the end of the evening, when almost everybody was gone, a fellow PCS member and I and a few kids from LA Children’s Chorus waited for the maestro at the backdoor.

The moment Dudamel saw us, he started gushing and praising everyone for the wonderful job. We were gushing too, and when it was my turn to shake his hand, I told him that he was such an inspiration and so wonderful and awesome that night. He said, “No, it was all of you, your work. I just conducted.” I was just speechless but after a few seconds, I realized that he was still next to me so I had to ask for that picture with him.

(E-mail the columnist at [email protected] Follow him at http://twitter.com/nepalesruben).

Read Next
Obama to give medals to Al Pacino, Amartya Sen
EDITORS' PICK
OPINION: Mischief Reef – where it all started
POVA x Mobile Legends Bang Bang: A partnership that’s built to win
Infants bundled off; no one hurt in PGH fire
Tired of your Wi-Fi signal problems at home? Here’s a solution!
Fire-damaged PGH calls for donations
CPA Australia and their designation: Advance your career
MOST READ
Leonen impeachment case moves forward in House
Hot, humid weather for PH on Monday — Pagasa
Longest recession since Marcos era
Long working hours are a killer, WHO study shows
Don't miss out on the latest news and information.