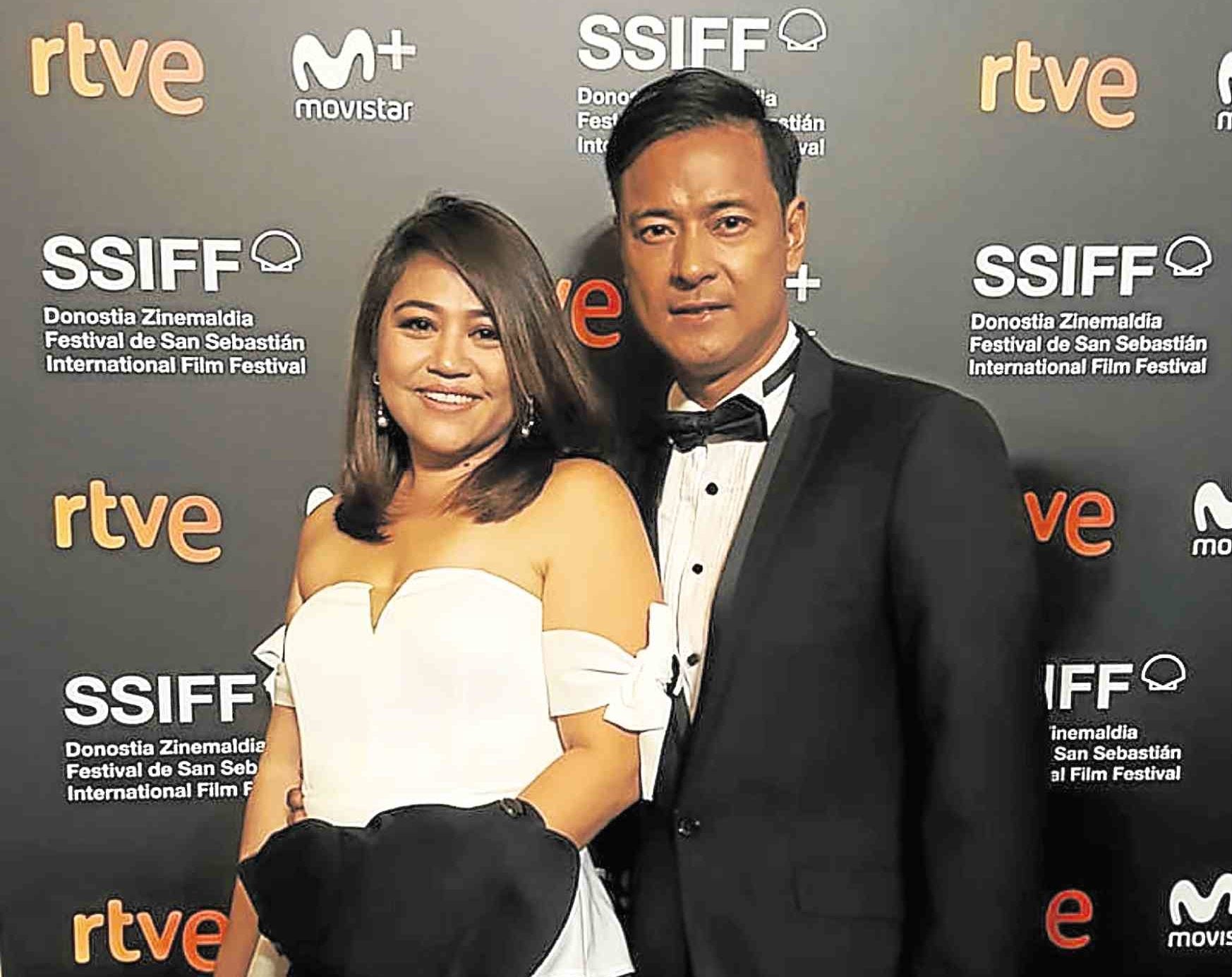 Allen Dizon (right) and wife Crystle at the awards ceremony

A film that tackles the Philippine President’s controversial war on drugs has won an award in an A-list festival in Spain.

The film, which picks up where the Cannes-winning director’s Netflix/TV5 series “Amo” has left off, topbills Mendoza veterans Allen Dizon as a corrupt cop and Baron Geisler as a drug dealer, and newcomer Elijah Filamor as a police asset.

Geisler, who had just finished a stint in a rehab center in Cebu, told the Inquirer via Facebook Messenger: “I feel that I don’t deserve [this]. I give back the honor to God.”

The Inquirer caught up with Geisler while he was on his way to church on Sunday. “I feel very blessed that I was a part of the ‘Alpha’ project and most especially that He was able to restore me to who I am supposed to be. I am praying to make more relevant and good quality projects with Direk Brillante and his awesome team!”

At the party after the awarding ceremony, Dizon was showered with congratulatory messages from fellow guests. “They kept telling me how good our film was … how amazed they were by Direk Brillante’s treatment,” Dizon recalled. “Nakakatuwa at nakaka-proud.”

Apart from the award, “Alpha” also scored a distribution deal with Paris-based Memento Films, Dizon, who was in Spain, related on Facebook Messenger. 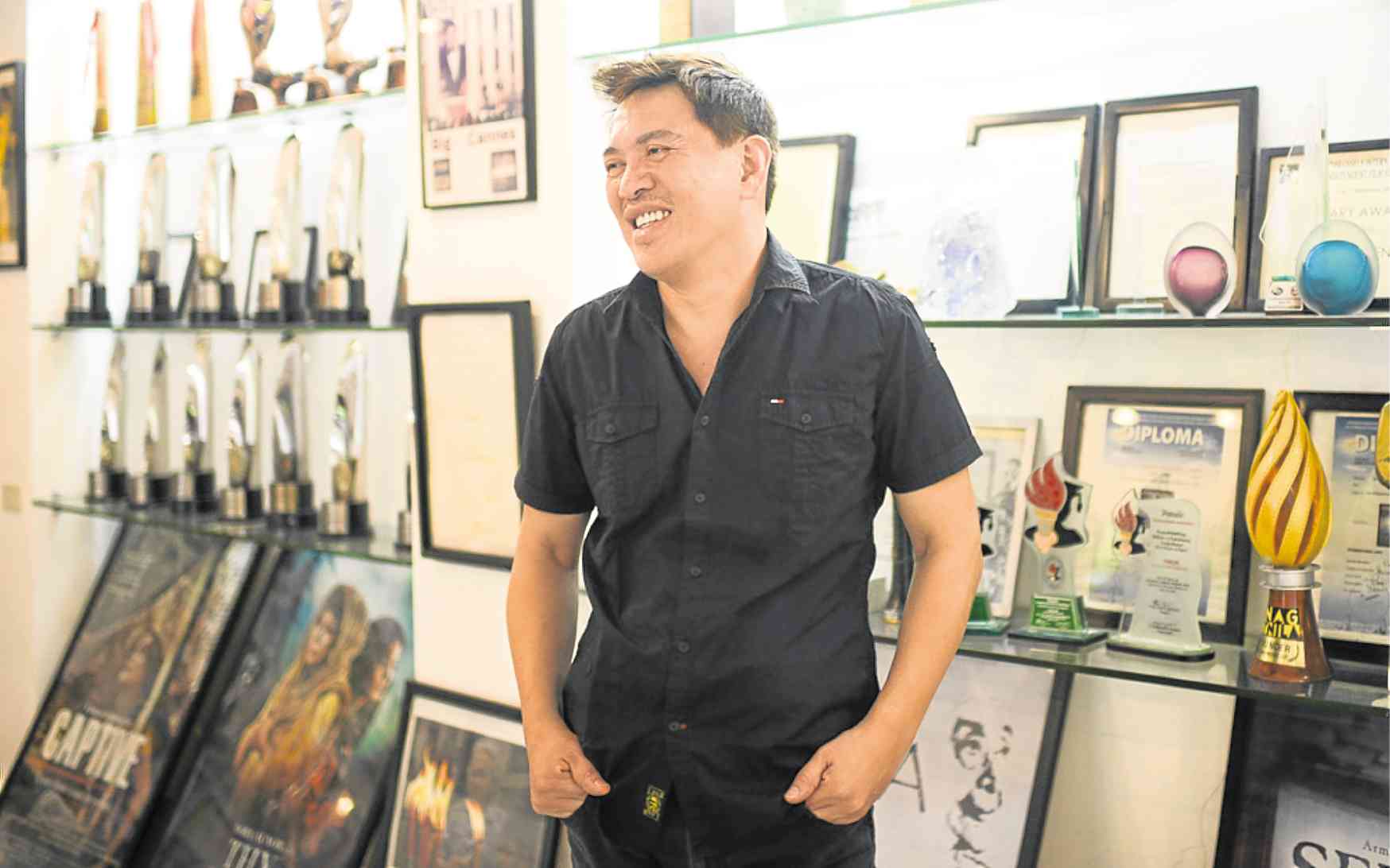 Dizon explained: “This honor inspires me to do more significant films. I vow to work harder in future projects.”

In his Sept. 28 review in the industry bible, Lodge points out: This “atmospheric” film “covers familiar ground, but does so with a potent, purposeful stride. There’s a bone-weary resignation to its world view that underlines its simple moral point all the more effectively.”

According to the fest’s website, the jury is “also free to grant a Special Prize to the film which it considers worthy of receiving the award for any reason.”

According to Instituto Cervantes’ Jose Maria Fons Guardiola, Lacuesta’s films were shown in past editions of the annual Pelicula, the Spanish Film Festival in Manila. “We screened ‘La propera pell’ (2016) last year. Way back in 2010, we presented ‘Los condenados’ (2009) and ‘La leyenda del tiempo’ (2006).”

This is Lacuesta’s second time to top San Sebastián, regarded as the biggest festival in the Spanish-speaking world. He first won the Golden Shell for “Los pasos dobles” in 2011. Guardiola hopes to screen Lacuesta’s latest San Sebastián winner in next year’s Pelicula.

Meanwhile, this year’s Pelicula will be held at Greenbelt 3 Cinemas, from Oct. 4 to 14; Cine Adarna in UP Diliman, from Oct. 15 to 16; and will end at Instituto Cervantes Intramuros on Oct. 20.

Read Next
Opening This Week
EDITORS' PICK
Acer starts the year off strong with the Aspire Vero National Geographic Edition
Gear up and get ready to play with Yamaha Mio Gear
PH to import 60,000 tons of fish to cover shortage
Workers are exempted from ‘no vax, no ride’ policy – DOLE chief
Over 3 Million worth of prizes to be won at Smart Padala’s SENDali Manalo Promo!
#VotePH2022: COVID, power woes loom as poll concerns
MOST READ
Guevarra to Acosta: Obey rules on unvaccinated
PH to import 60,000 tons of fish to cover shortage
Emma Stone calls Andrew Garfield a ‘jerk’ after he ‘lied’ about his ‘Spider-Man: No Way Home’ appearance
Cold-case investigation names surprise suspect in Anne Frank’s betrayal
Don't miss out on the latest news and information.