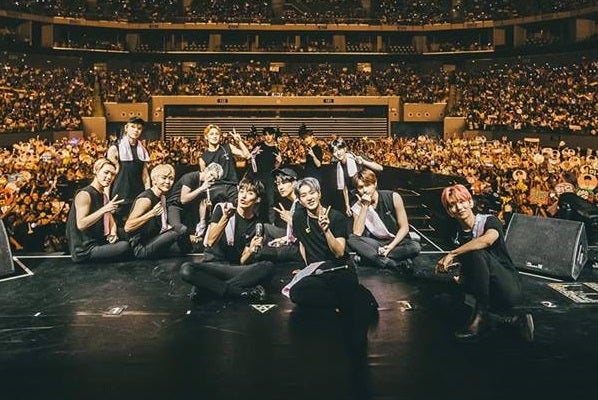 Members of K-pop group SEVENTEEN pose on stage at the MOA on Saturday night, Sept. 29, 2018. PHOTO BY PULP LIVE WORLD

Self-producing idols SEVENTEEN performed for their Filipino fans as part of their “IDEAL CUT” tour at the Mall of Asia (MOA) Arena last Saturday, Sept. 29.

The 13-member K-pop boy group dazzled the fans with slick choreography and soulful voices in a three-hour concert.

Known for their synchronized dances in the K-pop scene, the boys performed their hit songs including recently released “Oh My,” “Clap,” “Thanks” and “Very Nice.”

SEVENTEEN also held a fan signing event with a Korean skincare brand at Robinsons Galleria where 200 fans got to meet and greet the boys on Sunday, Sept. 30.

Debuting in 2015, SEVENTEEN gained a huge following for producing their own tracks, writing their own lyrics and choreographing their performances.

It’s not the first time that SEVENTEEN visited their Filipino Carats for a show as they also performed last 2017 with Diamond Edge tour.