Alden to perform ‘buwis-buhay’ stunts in his Sept. 21 show 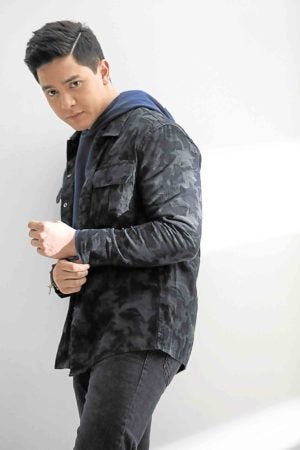 His voice isn’t exactly something to write home about, he admitted. He’d like to think, however, that he effectively injects lambing into his songs, which makes them endearing enough to his fans.

“When I cover songs like ‘God Gave Me You’ or ‘I Will Be Here,’ I believe there’s a certain warmth to it, because I always sing from the heart. My voice isn’t that good, but sometimes it’s about what the crowd feels from you,” he told reporters at a recent press con for his upcoming concert, “Adrenaline Rush.”

“I perform with an aim to entertain and make people happy,” added the 26-year-old heartthrob, who also pointed out that, as an actor, he’s also “very sensitive” emotionally.

“Words and melodies affect me, which translates [to my singing],” he said. “It also depends on your emotional state. If you’re feeling extra motivated or inspired, then it’s easier to perform… people will see that.”

But that doesn’t mean he has no desire to improve. He has taken up voice lessons in the past and plans to do it again in preparation for his second solo major concert on Sept. 21 at the Kia Theatre.
“I’ve worked with a voice teacher before,” he related. “He taught me different techniques.”

As if singing well isn’t hard enough, Alden plans to do it while dancing, and doing physically taxing numbers and stunts.

“That’s the biggest challenge for me, singing while pulling off choreographed moves—you need to have endurance for that. I have nothing but respect for those who can do these things flawlessly,” he said, adding that he’s thankful that his director, GB Sampedro, has allowed him to get involved in putting the concert together, which includes song selection.

“I have to be knowledgeable, too… I need to carefully pick songs that are within my range and I can perform well,” he added.

Can the fans expect high-flying productions or stunts? He doesn’t want to give away too much, but he assured that he’s coming up with something buwis-buhay.

“There will be production numbers that will be done offstage; things that will require safety measures; things that rely on precision and timing. We will be maximizing the entire venue,” Alden related. “We will be rehearsing and training hard.”

Teased if he would be showing a little skin, since his role in the fantasy-drama series “Victor Magtanggol” requires him to be in good shape, Alden quipped that he’s “open to doing different things.” In any case, should he be required to do so, he’s “physically ready.”

So far, the roster of special guests includes Regine Velasquez, Ai-Ai delas Alas, Ex Battalion, Rodjun Cruz and One Up.

What about Maine Mendoza? “That’s always a possibility,” he said.

Alden is also set to release his new album, “Until I See You Again,” on the night of the concert.
“Majority of the songs are original. The taste of listeners is ever-changing, so we have to come up with OPM songs that are different, but still very me,” he said.

Read Next
What ‘Goyo’ has taught Epy Quizon
EDITORS' PICK
National COVID-19 vaccination drive gets over 5.3 million people vaxxed so far
This new condo in the South will make you want to turn a new leaf
Pandemic prognosis: Where does it go from here?
Google won’t accept election ads for 2022 national polls
Legarda: Ending Violence Against Women, a cause for all
Smart offers wireless fiber-like speeds to Filipino homes with country’s first 5G Prepaid Home WiFi
MOST READ
Bongbong Marcos to face another disqualification case
Christine Bersola, Julius Babao cleared of cancer after colonoscopy, endoscopy
‘Maraming nagpapagkamatay sumali’: Bongbong-Sara’s full Senate slate out soon, says Imee
Tropical storm intensifies as it approaches PAR
Don't miss out on the latest news and information.