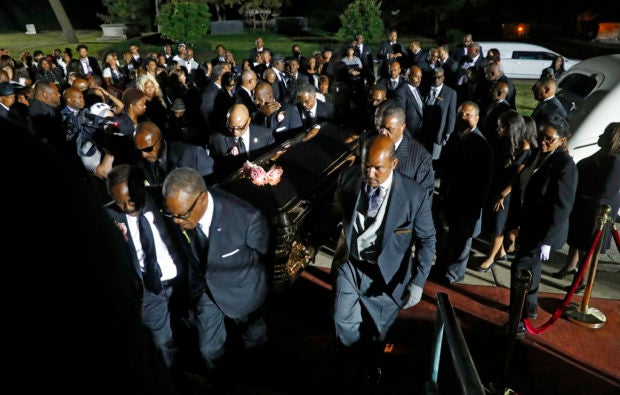 The casket of Aretha Franklin is laid to rest at her burial at Woodlawn Cemetery in Detroit, Friday, Aug. 31, 2018. Franklin died Aug. 16, 2018 of pancreatic cancer at the age of 76. (AP Photo/Paul Sancya, Pool)

DETROIT — Aretha Franklin is in her final resting place.

The casket of the Queen of Soul was interred Friday evening in a mausoleum at Woodlawn Cemetery in Detroit, just over two weeks after she died of pancreatic cancer at age 76.

Franklin’s loved ones arrived at the cemetery after a 10-mile processional through her hometown from Greater Grace Temple, where an eight-hour service of songs, sermons and speeches was held earlier in the day.

Woodlawn is also home to the graves of Franklin’s father, two more of his daughters, and civil rights luminary Rosa Parks.

The interment ends the formal mourning for Franklin, who was dressed in four different outfits for open-casket viewings in the days leading up to the funeral.

She was buried in a gold dress and sparkling pumps.

Earlier, Stevie Wonder wowed with his harmonica skills and then brought the remaining mourners at Aretha Franklin’s lengthy funeral to their feet with a moving version of “As.”

The choir, Franklin’s family, preachers and remaining guests swayed as Wonder played the classic tune in honor of his old friend.

“The reason we are here today is love,” Wonder said in remarks.

“God bless, Aretha,” Wonder said at the end of his song. “The joy is in knowing that she will have an eternal life of bliss.”  /kga

Read Next
T-Pain, bodyguard detained at airport after gun in carry-on
EDITORS' PICK
Work-From-Home is here to stay and requires reliable logistics
PH still at bottom of COVID-19 economic resilience ranking
Legarda emphasizes role of ICC/IPs in nation building this IP month
Climate Change Commission and Nestlé PH to discover sustainability-focused solutions
TNT nears PBA crown after rout of Magnolia in Game 4
Renewal of driver’s license now requires taking LTO education seminar
MOST READ
Drivers now required to take driver’s education upon license renewal – LTO
Marcos Jr’s ‘special diploma’ from Oxford: You can have it, too
OVP spox to Imee Marcos: Robredo is an extraordinary lawyer
Don’t do that: Robredo to supporters calling to boycott restos supportive of Marcos
Don't miss out on the latest news and information.