Emma Thompson: I am an atheist because religions oppress many women | Inquirer Entertainment
Close
menu
search

Emma Thompson: I am an atheist because religions oppress many women 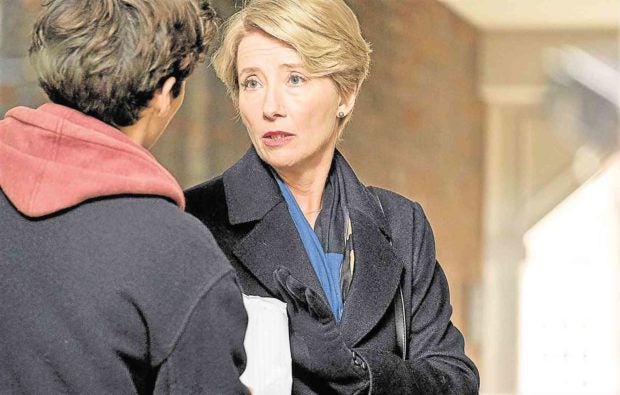 LOS ANGELES—At 59, Emma Thompson continues to shine as one of the finest actors of her generation. In “The Children Act,” director Richard Eyre’s film adaptation of Ian McEwan’s novel of the same name, Emma plays a judge in the High Court of Justice of England and Wales, Fiona Maye, who must decide a case involving a teenage boy, Adam Henry (Fionn Whitehead), and his parents who are refusing a blood transfusion on religious principle.

Emma tackles the role, complicated by the judge’s crumbling marriage as she decides on the difficult case involving a young man’s life, with depth and intelligence.

The English actress is further challenged by the fact that she has to sing and play the piano live in the movie.

In our interview via Skype, Emma—white blonde these days—was candid as usual, her self-deprecating British wit lightening up our discussion on these serious roles. She was in a room in The Soho Hotel.

What attracted you to “The Children Act”? I read the book and really liked it. I have certainly never seen a film about a woman judge or anything about the family court. It seemed a fantastic subject for film.

When I was researching it and meeting judges, I was so impressed with their liberal qualities. They are so clever, brilliant. They work so hard.

And the work that they do in the courts is so heartbreaking and difficult. The judges see a lot of pain, suffering and anger.

Fiona, my character, has just been knocked sideways by her husband who finally, after trying to talk to her for years, throws a grenade into the bedroom and just says, OK, if you are not going to listen to me, I am going to have to do this.

She has to respond and she doesn’t know how because most of the time when she is being listened to, she is sitting above everyone and she is in a godlike position.

What is your own take on the moral and ethical debate that this drama provokes? When it comes to religion versus science, where do you stand? From a personal point of view and not in relation to the film, I’m very interested in listening to scientists now speaking to religious people and then realizing that they have a lot more common ground than they thought.

I am an atheist myself, but I believe in spiritual life being important… and the reason that I am an atheist in so far as the world religions that we have, is because I have seen them oppress so many women for so long. So, to me, religion is the history of the oppression of women.

But first and foremost, I am a feminist. I believe in women’s rights and equal rights. I find any system that systematically oppresses women to be one I cannot have sympathy with.

With regard to the life and death, religion versus science argument that occurs in the film, there’s a lot more subtlety going on.

Recently, there have been arguments in our press about somehow identifying the gene for Down syndrome and making sure that nobody has Down syndrome children again. I know some parents of Down syndrome children who are horrified by that. That argument, that area of discomfort, exists along the same line of thought as being uncomfortable with receiving another person’s blood into your body. 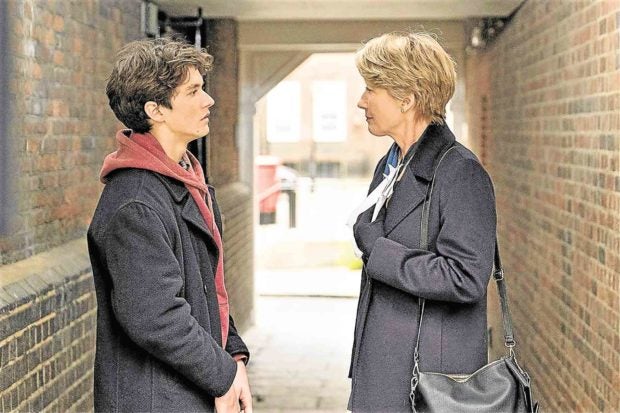 Scene from “The Children Act”

Speaking of women and rights, what are the challenges in your relationship with your daughter, Gaia Romilly Wise, who is now 18? You have to listen to your child in a different way as she gets older. Adapting yourself to their growth is one of the jobs and demands and one of the interesting paths of parenthood. Some people never manage it.

So, I will be looking at my girl and thinking, oh, there’s my little girl, then she will suddenly talk to me about her tutor’s PhD on the role of the patriarchy and the suppression of the female orgasm. I will go, “Bloody hell, that’s interesting (laughs).”

Are you different in your personal life when you are filming lighthearted material as opposed to when you are tackling a serious story? No, I am so used to it. But there is a difference if you are doing a straight-out comedy. You are not necessarily likely to bring it home. I did drive my family almost mad because in “The Children Act,” my piano playing is all live, so I had to practice all the pieces that I play, until my family finally said, you cannot do that anymore or we are going to leave you (laughs).

Of all the things in that film, that was the biggest challenge—playing those pieces and singing live.

If you could sit on the piano and sing in real life, and not for a movie, what song would you perform? I would learn and play “The Man That Got Away” from “A Star Is Born.”

You are also in BBC’s new TV movie production of “King Lear.” How different is it when your role, Goneril, has been played by so many other actors, as opposed to your role in “The Children Act,” which you originated? I have not played much Shakespeare, partly because there are loads of other people who can do that better.

But I wish I had now, because playing Goneril was so wonderfully interesting. It’s partly because of Richard Eyre’s interpretation. Tony’s (Anthony Hopkins) interpretation of Lear was so good.

I loved playing Goneril, and it must have been really interesting seeing those two very different women because Fiona is the opposite.

In your own life, how do you avoid making the same mistakes that Fiona did? I have made those mistakes. They have been beaten out of me, however, by my family who are good at pointing things out. It’s so true, though.

If you work in an environment where you get looked after in any way, in the same way that Fiona is looked after, you have to be careful to remember that even if you don’t have an opportunity to go and buy your own milk, that you are in a very peculiar position.

Can you give an example of when your husband or daughter reminded you of that? My daughter said she remembers one time when I came down from upstairs and I was furious with my husband because he hadn’t made my tea. I said to her, OK, it probably wasn’t about the tea.

What I took from that was, make sure that if you are going to have an argument with someone in front of your children, let it be about the thing that it’s about and don’t disguise it as something else.

Read Next
Worthwhile twists outweigh infuriating moments in ‘Extinction’
EDITORS' PICK
Gilas out to prove Korea win not a fluke; Tab fires back at ‘lucky shot’ remark
Smart brings KCON:TACT especially 4U to subscribers from June 19 to 27
Smart celebrates all kinds of ‘#SimplyLove’ for Pride Month
SWS: Over 12M Filipinos still jobless as of May 2021
Brazil set to pass half a million COVID-19 deaths
WATCH: INQside Look with Fil-Am actress Aina Dumlao
MOST READ
The opposition’s dilemma
Underdog Dasmariñas vows to fight to the death vs Inoue
Chavit Singson joins Nationalist People’s Coalition
Rajko Toroman praises, warns Gilas Pilipinas
Don't miss out on the latest news and information.