Luis Manzano surrounded by trash while scuba-diving, tells people to be more ‘responsible’ 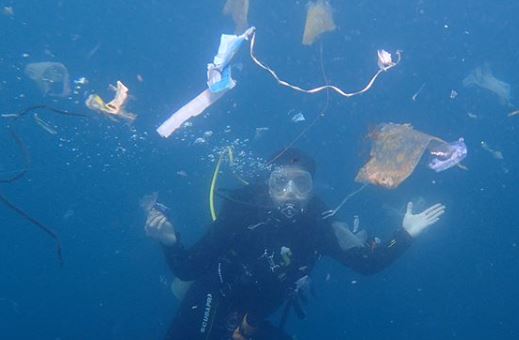 Luis Manzano recently took to social media to share the alarming condition of our oceans due to improper waste disposal. In his Instagram post made on Aug. 27, Manzano showed pictures and a video clip of him scuba-diving. In the photos, Manzano can be seen underwater, surrounded by all sorts of trash.

“AFTER ONE DIVE,” wrote Manzano in his post. “See the amount of plastic and trash we have in our waters, we are better than this everyone!!!”

Manzano didn’t say where he went scuba-diving, but in his uploaded video, he can be seen waving in front of the camera as tons of trash float around him. The camera then pans around, showing more trash floating underwater.

“What is happening to our oceans, see the amount we picked up after just ONE DIVE,” Manzano said, sounding upset. “Please be more responsible with your trash, please naman.”

But despite being distressed over the trash in the ocean, Manzano did not try to  wash his hands or point the blame at anyone. Manzano urged his fans to dispose of their trash properly, citing clean-up dives would be futile if people don’t learn proper waste management.

“All the clean up dives in the world won’t do anything unless we dispose of garbage the right way! WE HAVE A PROBLEM PEOPLE.”

More and more celebrities in recent times have been speaking up about the trash that pervade communities, often taking to social media to express their grievances over this menace.

Last May, Solenn Heussaff took to her Twitter to lament the trash in the streets, wondering out loud why people could not dispose their waste properly despite it being such a simple thing.

Iza Calzado last June called on people to clean up trash after her pet dog Hugo died from eating plastic. Hugo apparently ingested a piece of plastic while out for one of his walks, his death a huge upset to the actress who mourned his untimely death.

Meanwhile, Jericho Rosales, who often surfs in Siargao, also bemoaned the trash in beaches. Last November, Rosales told his fans that plastic “hurts our seas, animals and affect the food we eat” and called on them to respect nature and stop throwing things in the ocean.  /ra

Read Next
‘The Hows of Us’ rated ‘PG’ by MTRCB, ‘A’ from CEB
EDITORS' PICK
Pandemic prognosis: Where does it go from here?
Legarda: Ending Violence Against Women, a cause for all
Smart offers wireless fiber-like speeds to Filipino homes with country’s first 5G Prepaid Home WiFi
This new condo in the South will make you want to turn a new leaf
Google won’t accept election ads for 2022 national polls
House OKs bill allowing married women to retain maiden surname
MOST READ
Bongbong Marcos to face another disqualification case
Tropical storm intensifies as it approaches PAR
Christine Bersola, Julius Babao cleared of cancer after colonoscopy, endoscopy
Danish concert-goer confirmed infected with Omicron variant
Follow @CCepedaINQ on Twitter
Don't miss out on the latest news and information.