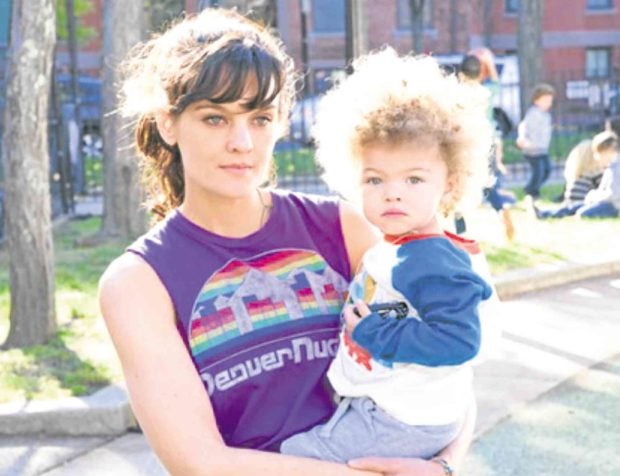 Hot-button issues give the adult-oriented comedy-drama series “Smilf” (or “single mom I’d like to f**k”) its relevance and edge, but the barrage of potentially controversial topics feels contrived.

Still, it merits viewing for its audacity and its cast’s unpredictable performances. In the first episode of the series streaming on Fox+, single mother protagonist Bridgette Bird (Frankie Shaw) is depicted as the struggling and exhausted mom of a toddler, Larry (Anna and Alexandra Reimer).

She remains friends with the kid’s biological dad, Rafi (Miguel Gomez), who’s raising Larry, too—when he isn’t hooking up with other women.

Her mom, the socially distant Tutu (Rosie O’Donnell), also helps out when she can.

The twentysomething woman, whose lack of intimate contact with others makes her focus on her insecurities—mainly about her body, specifically her “lady parts”—juggles her many responsibilities, and desperately sneaks in some pleasures for herself at the day’s end.

“Smilf” often feels and looks like “Louie,” in that there is subtle humor, which is complemented by a dash of awkwardness and unapologetic grit.

In an interview, Shaw, who is also the show’s creator, cited Louis C.K.’s show as an influence, but has expressed dismay over the comic’s admission to sexual impropriety.

Still, it is distinctly her own show. It delves into combustible issues every few minutes in the busy initial episode alone.

Bridgette forbids Rafi from teaching prayers to their child, who happens to be biracial. This young mom is comfortable with herself, and not averse to fantasizing about her “baby daddy’s” girlfriend (Samara Weaving), too.

Bridgette also attempts to sexually connect with an acquaintance (Alex Brightman), but since she isn’t exactly brimming with confidence, the short-lived booty call is a bust.

An aspiring actress, she aces an audition for a traumatized soldier role, revealing that she drew from her own deeply distressing experience—having been sexually assaulted. It’s not entirely a bag of laughs, for sure. It’s discomfiting, but that’s exactly what they’re aiming for.

“Smilf” benefits from O’Donnell’s participation as the gruff grandma, a role that was originally meant for Roseanne Barr.

Based on Shaw’s 2015 short film of the same title, the series is uniquely complicated, and despite the bombardment of the requisite touchy topics, it has a titular character whose complexity is familiar, yet still fascinating.