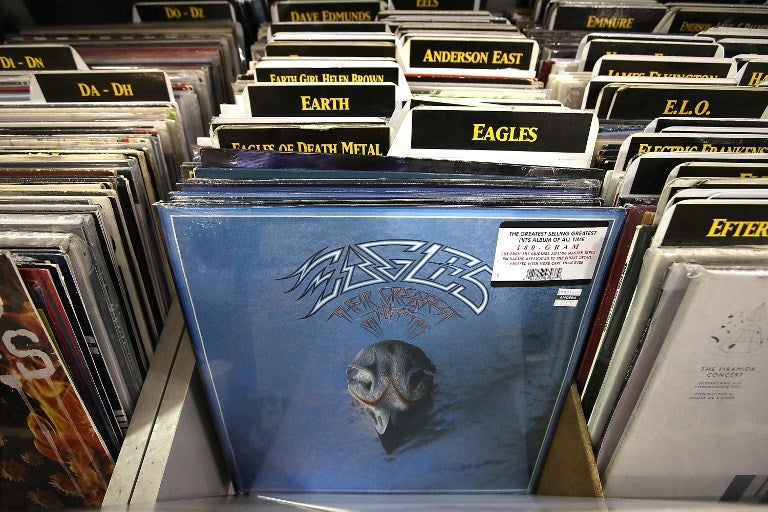 The Eagles album ‘Their Greatest Hits 1971-1975’ is displayed at Amoeba Music on August 20, 2018, in San Francisco, California. The Eagles album Their Greatest Hits 1971-1975 has surpassed Michael Jackson’s Thriller album as the best-selling album of all time. The Recording Industry Association of America (RIAA) recalculated sales of the Eagles hits collection and certified the LP as 38x platinum compared to Thriller’s 33x platinum. AFP

NEW YORK, United States – A box set of The Eagles’ greatest hits has surpassed Michael Jackson’s “Thriller” as the biggest selling album of all time, according to a new ranking by the Recording Industry Association of America.

The set had long held the top spot but was overtaken in 2009 by “Thriller” following a surge of sales for the album after Jackson’s death.

“Hotel California,” the Eagles’ 1976 album with the hit single of the same name, was ranked third, with 26 million units sold.

The new ranking includes sales both of discs and via streaming, which had not been calculated for the Eagles since 2006, according to Rolling Stone magazine.

“We are grateful for our families, our management, our crew, the people at radio and, most of all, the loyal fans who have stuck with us through the ups and downs of 46 years. It’s been quite a ride,” Don Henley, 71, the group’s lead singer and co-founder, said in a statement carried by Rolling Stone.

After the death of Eagles co-founder Glenn Frey in 2016 at the age of 67, the group was reconfigured and resumed touring the following year. It has scheduled a series of concerts in the United States in September. /cbb