Weinstein accuser paid teen who said she raped him – report 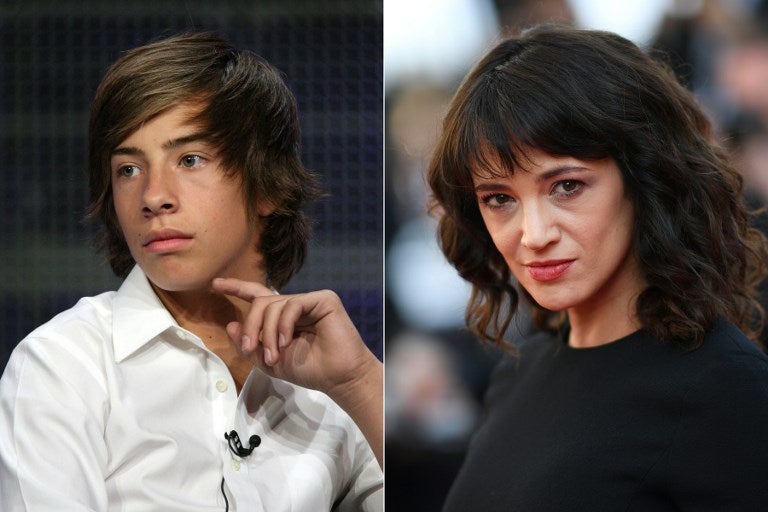 Italian actress Asia Argento (right), who became a leading figure in the #MeToo movement after accusing powerhouse producer Harvey Weinstein of rape, paid hush money to a man who claimed she sexually assaulted him when he was 17, The New York Times reported on August 19, 2018. AFP

WASHINGTON, United States – Italian actress Asia Argento, who became a leading figure in the #MeToo movement after accusing powerhouse producer Harvey Weinstein of rape, paid hush money to a man who claimed she sexually assaulted him when he was 17, The New York Times reported Sunday.

The $380,000 payment was made to Jimmy Bennett, an actor and rock musician, who claimed Argento assaulted him in a California hotel room in 2013, according to the Times, which cited documents sent to the paper by an unidentified party.

Bennett was two months past his 17th birthday at the time of the alleged encounter, while Argento was 37. The legal age of consent in California is 18. The pair are now 22 and 42 respectively.

The newspaper said it had tried repeatedly without success to get a comment on the matter from Argento and her representatives.

The terms of the deal including a payment schedule were finalized in April this year, according to the documents seen by the Times.

Among the documents it received was a selfie of the pair lying in bed dated May 9, 2013, that Bennett was supposed to hand over to Argento along with its copyright under the agreement.

The Times cited three people familiar with the case as saying the documents were authentic.

The pair acted together in the 2004 film “The Heart Is Deceitful Above All Things, in which Argento plays Bennett’s troubled mother.

Argento’s lawyer Carrie Goldberg described the money as “helping Mr Bennett,” lamenting that the actress had to deal with people “who preyed on both your strengths and your weaknesses.”

Bennett’s lawyers had characterized the hotel encounter as a “sexual battery” that traumatized the former child actor, threatening his mental health and income.

His notice of intent to sue sought $3.5 million in damages for “intentional infliction of emotional distress, lost wages, assault and battery,” the paper said.

Argento became a powerful voice for the #MeToo movement after accusing Weinstein of raping her when she was 21 in his hotel room in 1997 during the Cannes film festival.

Bennett’s legal action was launched a month after Argento’s accusations against Weinstein were made public, the Times said, adding that his lawyer claimed his client recalled the hotel encounter after seeing Argento present herself as a victim of sexual assault.

Argento made an emotional speech at this year’s Cannes festival, telling the audience: “Things have changed. We are not going to allow you to get away with it.”

Her late boyfriend, celebrated television food critic Anthony Bourdain, was also an outspoken voice in the movement decrying sexual misconduct by power players in the entertainment industry and beyond. /cbb