No singing for Josh Groban in 1st lead role on TV 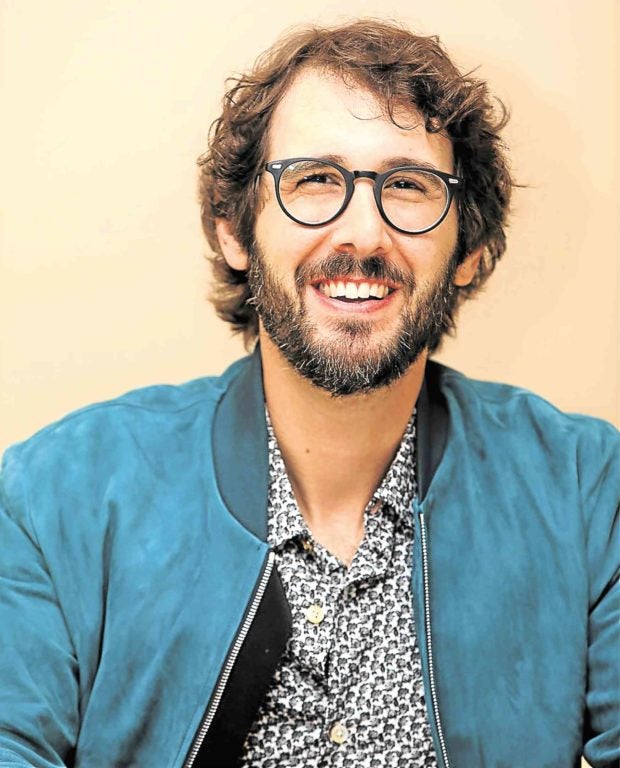 Josh costars with veteran TV and stage actor Tony Danza in the dramedy based on an Israeli show of the same name.

They play father and son, Tony Sr. and Tony Jr. (TJ), who live together but couldn’t be more different.

Dad is a disgraced former cop who did not follow the rules while TJ is a straitlaced detective who always follows the rules.

It’s quite a shift for the popular pop opera star who earned a 2017 Tony Award best actor in a musical nomination for his Broadway debut in “Natasha, Pierre & the Great Comet of 1812.”

How do you feel about being colead in a TV show? I am definitely sharing the huge honor with Tony Danza, the colead of the show. Knowing that I was going to be able to do this with Tony was a huge relief for me. I would be able to learn from him and to bounce off our chemistry together was something that made the nerves go away a little bit.

But it was a new door that opened up for me. I had just done Broadway for a year, so my acting mind was still in that space. But I had never done anything on this scale on screen. So for Andy Breckman, who created the show, to have a leap of faith in me, he saw something in me that was right for the character. He took me out to a diner in New York, bought me pancakes, and I couldn’t say no (laughs).

It was a learning process for me. I had to get to know what being on camera felt like, what acting on a soundstage versus acting on a Broadway stage would feel like.
With anything new, there’s a lot of bouncing back and forth and you flying by the seat of your pants. But it’s a great feeling.

Were you really looking to do something like this? It was definitely something that I wanted to do. I had said to people within my team, “I would love to be part of this world and I would put music to the side momentarily, if the right role came along.”

But as with everything in entertainment, my music career happened the same way. I wanted it, but the door that was opened by David Foster—my music world—was totally unexpected. David saw something in me, and I had to walk through it.

The same thing happened with “The Good Cop.” Andy Breckman opened a door for me. He said, “I believe in you. I think this is right for you.” And I walked through it.

Riffing on the concept of the show, could you imagine still living with your father (Jack Groban) at this time in your life? Sure (laughs). I did for 19 years. But as an adult, space is very important.

One of the things that makes our dynamic in the show very funny is that my character is such a man obsessed with his job, that he’s put some of the other balancing things in his life to the side. He’s living in the house he grew up in. That would personally drive me bonkers.

One of the dynamics of the show that is my favorite is that TJ puts on his suit and tie, straps his gun. He’s a big boy now. He’s head of homicide.
But then he has to walk downstairs and his dad is making breakfast. That keeps him from having a social life and from dating the way he wants to date. It probably bothers TJ just as much as it would bother me, but the situation is what it is for him.

And you also had your first time to perform in a show on Broadway. How was that experience? It was up there with filming “The Good Cop.” It was among my favorite experiences in my career. To go from being a solo artist in music, to being part of a collaborative effort where every member of the cast is telling this bigger story and you are a cog in one big, beautiful wheel, was wonderful.

It also taught me what my stamina could be.

When you are in recorded music and you are attaining a certain level of fame, you can call your own shots. You can say, “Oh, I don’t feel well today.”
On Broadway, you have to show up. People are depending on you. So eight shows a week was a grind for almost a year. It taught me how much stronger I was than I thought.

There are things that really test your boundaries. You push through them and you realize you have more than what you can do.

Are you a good cop material in real life? I’m a pretty good shot. I did a lot of firearms training both for the role and prior to the role. One of my dear friends who does my security when I am on tour works in SWAT. He is a SWAT chief. If we found ourselves in a city where there was an outdoor gun range, he would show me the ropes. Not to toot my own horn but I outshot some of his cops.

I am really not a big gun proponent, but in a safe environment when it’s for sport, I really enjoyed it.

Since you and Tony play father and son, did you sit down and compare behavior? One thing that we knew going right into the show is that you look at the two of us next to each other, and it’s like, really? We knew we could use that to our advantage because we are an odd couple as a father and son.
But we have one thing in common—my character’s mother and his character’s wife have passed away. So there are plenty of traits that we decided that I could have that were more from my character’s mother’s side than his character’s side.

But as far as the love of family, community, our job and the fact that we are both singularly obsessed with police work and solving a crime, I do it a little differently than he did it. But we both still love to help people through that job. That’s where our similarities are and there are a lot of ways where the similarities end.

We also talked a lot about other stuff like accents, for instance. Tony has this New York accent, and I do not. There were times during the run-throughs early on that I decided to try that accent a bit. We said, “Let’s not go there with it, because it doesn’t need to be that overt.”