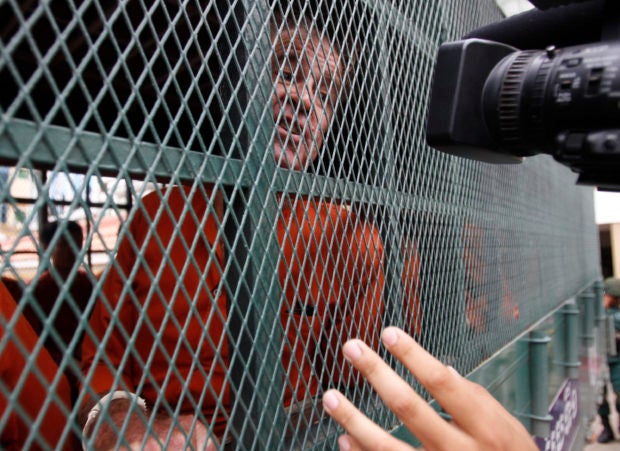 Australian filmmaker James Ricketson talks to journalists as he sits in a prison truck upon his arrival at Phnom Penh Municipal Court in Phnom Penh, Cambodia, Thursday, Aug. 16, 2018. Ricketson has gone on trial in Cambodia on charges of endangering national security after being arrested last year for flying a drone to capture images of an opposition political rally. Image: AP/Heng Sinith

PHNOM PENH, Cambodia (AP) — One of Australia’s most famous movie directors testified Thursday in Cambodia at the trial of a filmmaking countryman facing a possible prison term of five to 10 years for flying a drone to capture images of an opposition political rally.

Peter Weir, director of “The Year of Living Dangerously,” ”Dead Poets Society” and “The Truman Show”, testified as a character witness at the trial of James Ricketson, who was arrested in June 2017 and has been kept in detention since then.

Ricketson, 69, was taken in an orange prison uniform to the Phnom Penh Municipal Court for the first official trial session on the charge of endangering national security, which in legal terms is tantamount to espionage.

Before testimony began, Ricketson’s lawyer applied for his release on bail, as he had unsuccessfully done several times previously, but was again turned down by the judge.

Weir testified that he has known Ricketson since 1973, when they met at film school in Australia.

Weir, 73, told the court that Ricketson has never been involved with any political parties or government work but worked mostly as a freelancer and spent his life making documentary films, especially focused on Australian subjects, for which he had won several prizes.

“In 1973, I remember that that was the first year James went to movie school and I was his adviser. We have been friends and colleagues,” said Weir. “No one knows James better than I.”

Speaking to reporters outside the courtroom after he testified, Weir explained why he believed his friend was innocent of the charge.

“What James has done or not done may have been something that in Australia is perfectly normal but here has been seen to be sinister, and it is not, he is just doing everything he does in Australia,” he said.

Ricketson was arrested after he used a drone to film the final rally of the opposition Cambodia National Rescue Party before local elections. The party has since been dissolved as part of a sweeping crackdown on the opposition and media critical of Prime Minister Hun Sen’s government.

The crackdown was widely seen as preparation for ensuring a victory by Hun Sen’s ruling party in last month’s general election, in which it won all 125 seats in the National Assembly. With Hun Sen’s extension of power accomplished, there has been speculation the courts — widely seen as under government control — might allow Ricketson to walk free. Ricketson had been seen as sympathetic to the opposition party.

Despite his extended pre-trial detention, the official start of Ricketson’s trial has been twice postponed at his request, the first time to inspect further evidence and the second to acquaint a new lawyer with the case. According to his family, Ricketson has been detained in a 6-by-16-meter (20-by-52-foot) cell along with 140 other prisoners, and in May he reportedly became ill with a chest ailment and was moved to the prison hospital.

As he was being taken to a vehicle to be driven back to jail after Thursday’s trial session, Ricketson shouted to reporters that he had seen no evidence supporting the charge against him and questioned what country he was supposed to have been spying for. He has made the same points in previous appearances at court.

But in a July 1 letter to Hun Sen published in the pro-government Khmer Times newspaper, he apologized for his “mistake” in his statements about his situation.

“May I please, respectfully, send my sincerest apologies to yourself and the Cambodian government. I now realize that my statements I have made in the press and other media are disruptive and ill informed. These statements were made from a place of foreign naivety and ignorance about the complexities and difficulties of governing Cambodia,” he wrote.

“I apologize unreservedly and without condition for any distress I may have caused as a result of my ignorance of Cambodian issues. If there is anything I can do to remedy my mistake, please let me know as I only want the best for you and Cambodia,” the letter said. CC