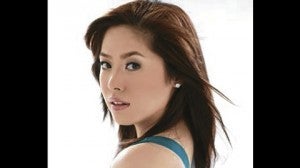 AMAZING GRACE A publicity shot of Grace Lee who also confirms in a TV interview that she and the President are dating. PHOTO FROM GRACE LEE’S FACEBOOK PAGE

From “Coke Zero” to kimchi.

It was the first time the bachelor leader publicly and categorically confirmed he was seeing someone, a pre-Valentine revelation also picked up by the South Korea media.

Lee (Kyung Hee-lee off-screen) was born and raised in Seoul but had since been “Filipinized” (to use a term in her profile on the GMA Network website) after moving to the Philippines at age 10 because of her father’s business.

She went to high school at St. Paul College in Pasig City and earned a degree in interdisciplinary studies at Ateneo de Manila University.

Mr. Aquino made the revelation after social networking sites went abuzz over reports that Lee had admitted on her morning radio show that she went out with the President the night before.

“Well, we are seeing each other, okay?” President Aquino said with a wry smile when asked about the real score toward the end of a news briefing on Wednesday morning at the lobby of the Philippine Information Agency office in Quezon City.

The audience erupted into cheers upon hearing the question and more so when they got the answer from the President, almost like movie fans agog over a newly unveiled love team.

President Aquino, who turns 52 next week, declined to take further questions about the date with Lee, 29.

“I think I’ll leave it at that,” he said. “In the Constitution, there’s a thing called privacy. Perhaps, I can also enjoy that right under Article 3.”

A couple of hours later, Lee confirmed President Aquino’s disclosure when asked by a fellow anchor on a GMA noontime news program.

“What the President said is true,” said a smiling Lee, who had just delivered the program’s show biz segment.

Like her date, she also shied away from further queries. “I think there’s no room for clarification because what the President said was simple,” she said.

On her FM radio show last week, Lee neither denied nor confirmed reports she and Mr. Aquino were seeing each other, saying she would rather not comment out of respect for the President.

In what now seems to be a prelude to his own Korean telenovela-in-the-making, President Aquino went off-script in a speech and described Lee as guwapa (pretty) at the inauguration of a power plant in Cebu in the middle of last year. Lee was then one of the emcees of the program. 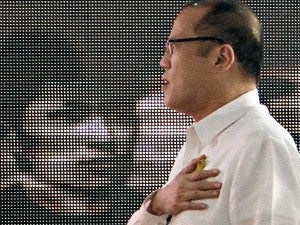 HAND OVER HEART. HEAD OVER HEELS? President Aquino stands at attention as the national anthem is played during the 25th anniversary of the Philippine Information Agency on Wednesday in Quezon City. The President admits for the first time that he is dating Korean radio-TV celebrity Grace Lee but he also invokes his right to privacy. GRIG C. MONTEGRANDE

In Lee’s native land, The Korea Times on Wednesday carried a story with the headline “Is Filipino president in love with Korean woman?”

“Philippine-Korean relations have suddenly gotten warmer,” an Associated Press report said on what could be a budding Palace romance, which came out in the open a week after the President’s former girlfriend, Valenzuela Councilor Shalani Soledad, tied the knot with Pasig Representative Roman Romulo.

Mr. Aquino and Soledad ended a two-year relationship shortly after he assumed the presidency in June 2010, after which the rumor mill had since linked the President to three more women: stylist Liz Uy, stockbroker Len Lopez and teacher Bunny Calica.  With a report from AP