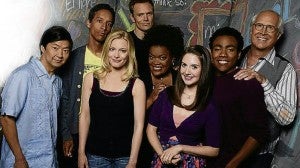 Consistently well-written and with one of the most synergistic casts on television, “Community” is a smart sitcom about a group of lovable misfits attending a community college.

Seven students regularly gather as a Spanish study group, the unexpected result of a ploy hatched by Jeff Winger (Joel McHale), an ex-lawyer who returns to school after his fake degree was exposed. He tries to adapt to his new situation, and quickly finds himself attracted to the hot twenty-something blonde, Britta (Gillian Jacobs).

His plan to get acquainted with her by starting a fake study group backfires, attracting students who wish to understand the subject more. Aside from that, they barely have anything in common.

Jeff eventually becomes the group’s leader, the odd bunch deferring to his real-life wisdom despite his oft-abrasive personality. They get into familiar college scrapes and disagree on issues a lot, but often survive them together like a family.

Created by Dan Harmon, the show riotously tackles campus systems and shenanigans, giving this culturally and racially diverse clique plenty of opportunities to weigh in on matters, and learn from each other.

Ken Jeong and Jim Rash also regularly inspire giggles as the misbehaving Spanish teacher Señor Chang and the bizarre Dean Pelton, respectively. The first season also has brilliant parodies of “Die Hard” and “Good Will Hunting” integrated into some of its best episodes, as well as memorable guest appearances by Jack Black, Owen Wilson and Lisa Rinna.

Each member of the group is continuously and cleverly developed. McHale nicely epitomizes the flawed father figure, his Jeff Winger character repeatedly finding common ground with, and learning new things from, his eclectic new “family.” 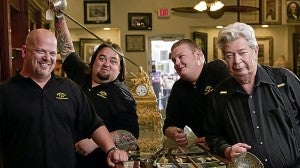 “PAWN Stars” stars: Chumlee the shop’s funnyman, second from left, with the Harrisons (from right) Richard, Corey and Rick.

Three generations of men from the Harrison family— grandfather Richard, son Rick and grandson Corey—jointly run their pawning business, using their sharp-eyed skills to carefully assess the value of items their customers bring in.