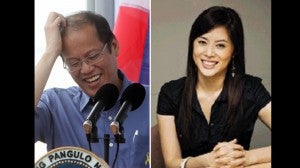 “We’re seeing each other,” Aquino answered when asked at the tailend of a news briefing the real score between him and the radio talk show host and TV anchor.

The reporters cheered the President, “Yihee.”

Pressed on how long they’ve been seeing each other, the President  invoked his right to privacy.

Aquino, 51, has been linked to various women, many of them younger than him.

“Neither the President nor anyone else can truly expect to govern the next five years with nothing but a sorry mix of vilification, periodically recycled promises of action followed by lethargy, backed up by few, if any, results, and presumptuously encouraging gossip about one’s love life in which no one can possibly be interested,” Arroyo said in a paper “It’s the Economy, Student.”