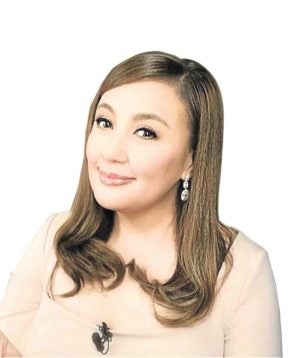 Megastar Sharon Cuneta is beyond ecstatic upon learning she is one of History Channel’s 10 awardees, dubbed “History Makers,” this year.

She told the Inquirer: “Again, it was a huge surprise! Totally unexpected.”
The singer-actress was so stunned that she had asked to see the mail, to check the authenticity of the regional network’s letterhead. She actually thought someone was playing a prank on her.

“I am still on cloud nine over it,” she admitted, noting that the honor’s timing couldn’t have been more perfect. “It comes at such a special time in my life. To have reached my 40th year in show business and be back on top of my game is still unbelievable to me.”

Just a few years back, she was feeling a bit despondent.

She quipped: “What a difference a couple of years and many pounds lost have made! I am, needless to say, grateful.”

Mega is no stranger to such prizes: She was an Ulirang Ina and Hallmark Channel Woman Achiever awardee in 2001, Patnubay ng Sining at Kalinangan recipient in 2002, TOYM honoree in 2004, Asia Inc. magazine’s Movers and Shakers in 2004, among other accolades.

“I want to do cartwheels, but I don’t know how,” she enthused, with a hearty laugh. “I am over the moon, seriously. This tops off everything for my 40th year celebration.”

Mega has been unstoppable of late.

She explained that this latest citation had arrived quick on the heels of “my first hit movie in years, after a long absence (Cathy Garcia-Molina’s “Unexpectedly Yours”), sold-out concerts (Cebu, Bacolod, Bohol and Davao City), and being part of two No. 1 weekend TV shows (“The Voice” and “Your Face Sounds Familiar”).”

Plus, she’s working on her ruby year concert at the Araneta Coliseum (“I wish tickets to ‘My 40 Years’ on Sept. 28 will be sold out!”), her soon-to-be-released first album for Star Music (“I hope to receive a record award of any precious metal for it!”), and her newly launched social media portals (on YouTube, Instagram, Twitter and Facebook). Whew!

All these blessings have motivated her to revive an old devotion.

“I am moved to start writing letters to God again,” she volunteered. “That was such a good habit that lasted for years and one I should’ve always made time for.”

Jacquem Ruby, country head for the Philippines, A+E Networks Asia (the company behind the History Channel), told the Inquirer: “The History Makers (honorees) are a special few whose talent, efforts, dedication and sacrifices illuminate and inspire the lives of many others. We are deeply compelled by the Megastar’s distinguished credentials… and wish to honor her outstanding achievements and contributions to Philippine cinema with the History Maker Award.”
The awarding is one of the highlights of the History Con, to be held at the World Trade Center Manila on Aug. 11.

Sharon exclaimed: “Thank you to the History Channel. I guess all I can do from hereon is to continue to do my best while keeping my feet firmly on the ground. I am thrilled beyond words. When God makes it rain, He makes it pour!”