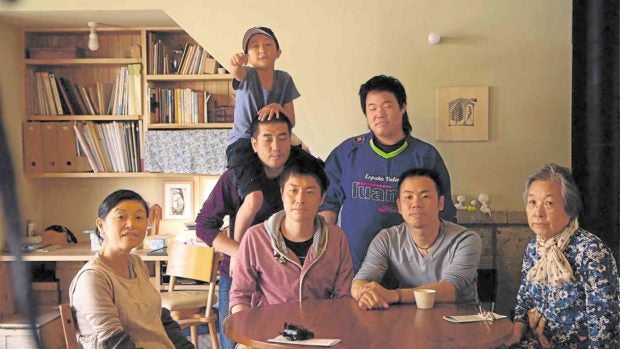 Kazu (seated, second from left) and Fumi (seated, third from left), with their family, in “Of Love & Law”

Issues pertaining to love, freedom, identity and family are explored in the 2017 documentary, “Of Love & Law.”

Hikaru Toda’s docu focuses on two gay lawyers who handle various cases in Osaka: from an artist’s crusade against antiquated obscenity laws to unregistered citizens’ struggle to be recognized in society.

In a curious twist, the two advocates’ biggest fight is right in their own home: as a same-sex couple with very limited legal rights to raise a family. (Gay marriage isn’t recognized in Japan on a national level, but certain cities like Sapporo have conferred some rights to members of the LGBT community.)

The director met Kazu and Fumi, the pair featured in the film, six years ago through an acquaintance.“I immediately fell in love with how accepting they were of each other,” she recalled.

Although some Japanese people can be guarded and reticent, Toda managed to elicit candid and revealing remarks from the two who gave their full support and cooperation to the docu—the best picture winner in the Independent Japanese Cinema category of last year’s Tokyo International Film Festival.

Beyond their work as lawyers, they are also involved in various activities, to “spread awareness not only on LGBTQ concerns, but human rights in general,” Toda explained. When she suggested the idea of a docu, “exploring issues facing people outside of what is accepted as ‘normal’ or ‘ideal,’ they saw it as a way to show how diverse ‘normal’ can be to the wider public through their work and their lives together.”

Production for the docu began in the fall of 2014 and took three years to finish. The director followed the duo around for two years and additional shoots had to be set after principal photography.

She related that she had lost track of the number of hours of raw footage in her files. “It’s about 12 TB [hard drive] worth of footage. Editing took a year.”

“There are many challenges to documentary filmmaking on the ground,” she pointed out. “They’re very busy lawyers, so we couldn’t get in the way of their profession. We had to be careful while filming what was necessary, to tell each story truthfully as we observed them and not do anything that would jeopardize their work, which is sensitive and delicate in nature.”

Oftentimes, Toda found herself straddling the “blurred lines” between the public and the private. “An intimate portrayal of characters doesn’t mean that your subjects have given up on their privacy. You always have to be respectful of how much they want to share with you and that has to come from mutual trust.”

For Toda, work on the docu continues. “The responsibility of a filmmaker doesn’t end when the film is finished. It lives with you forever, because you are responsible for representing someone else’s life onscreen.”

And how are Kazu and Fumi, a year after the film’s release? “They are [still] super busy lawyers,” she quipped.

Included in the lineup of this year’s Eigasai, or the Japanese Film Festival, Toda’s docu will have its Philippine premiere tomorrow (6:15 p.m.), as part of Cinemalaya.

Toda, who will visit Manila for the event, is looking forward to interacting with Filipino viewers during the forum at the CCP Little Theater. “I hope to engage with the audience after the screening to get a feel of their responses,” she asserted.

Her wish is for Filipinos to realize that “we are all different, and that’s what makes the world we live in beautiful. That there are different types of families, all unique and that there is no one way of being a family in this day and age.”

She is now working on a script that’s deeply personal. “It’s about my relationship with my aging mother. It is part documentary, part scripted. We’ll see what happens!”