Roseanne Barr on racist tweet: 'I wish I worded it better' | Inquirer Entertainment 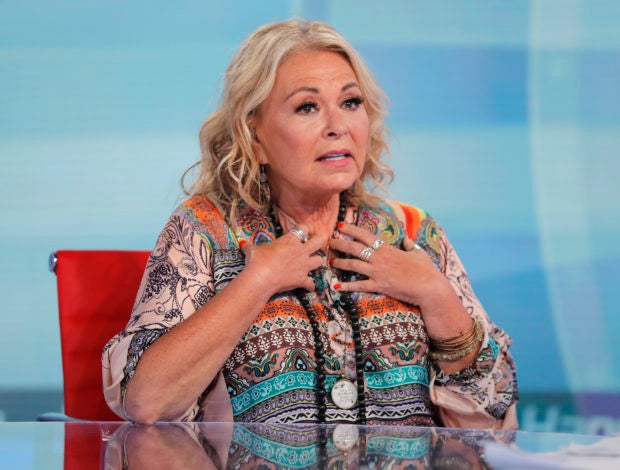 Roseanne Barr talks with Fox News talk show host Sean Hannity while being interviewed during a taping of his show, Thursday, July 26, 2018, in New York. The comedian and actress will appear on the Fox News show “Hannity” on Thursday at 9 p.m. EDT for the first time since she was fired from ABC which canceled its successful reboot of “Roseanne” in May following the star’s racist tweet likening former Obama adviser Valerie Jarrett to a cross between the Muslim Brotherhood and a “Planet of the Apes” actor. Image: AP/Julie Jacobson

LOS ANGELES (AP) — In Roseanne Barr’s first TV interview since her ABC sitcom was canceled for a racist tweet, the comedian apologized for her “ill-worded” post and insisted she is not a bigot.

During her hour-long interview on Sean Hannity’s Fox News Channel show Thursday, Barr lamented the damage done to her by her tweet about Valerie Jarrett, a former adviser to President Barack Obama.

“It cost me everything,” Barr said. “I wish I worded it better.”

Hannity repeatedly urged Barr to apologize to Jarrett on air. The comedian eventually did, saying that she was sorry for the poorly worded tweet. She said she would tell Jarrett, “I’m sorry that you feel harm and hurt, I never meant that. I never meant to hurt anybody.”

She repeated her assertion that she did not know Jarrett was black when she likened Jarrett to a cross between the Muslim Brotherhood and a “Planet of the Apes” actor.

Barr repeatedly said Thursday that her tweet was meant to address U.S.-Middle Eastern policy and had no racial overtones. She said she was stunned by the negative reaction to the tweet, which Hannity noted was nearly universal.

Despite apologizing at times, Barr also said she felt the tweet was being mischaracterized and she indicated she felt like she had apologized enough for her actions.

“I feel like I have apologized and explained and asked for forgiveness and made recompense,” she said early in the interview. At another point, just before addressing Jarrett directly, Barr said, “I already have said I’m sorry for two months.”

Barr, a supporter of President Donald Trump, brought him briefly into the conversation.

“I’m not a racist and the people who voted for Trump, they’re not racist either, and Trump isn’t a racist, sorry. We just have a different opinion,” she said.

She said she could have fought ABC over her firing, but that she walked away from the hit reboot because she didn’t want anybody to lose their jobs. She said her contract was supposed to allow her to correct any misstatements she made within 24 hours, but she wasn’t given the opportunity.

The new version of “Roseanne” was an instant smash for ABC, owned by the Walt Disney Co., and was counted on to lead the network’s fortunes next season.

Its debut episode last March was seen by more than 25 million people with delayed viewing counted in, numbers that are increasingly rare in network television.

ABC has announced that it will produce a “Roseanne” spinoff called “The Conners” that features John Goodman, Laurie Metcalf and Sara Gilbert. CC