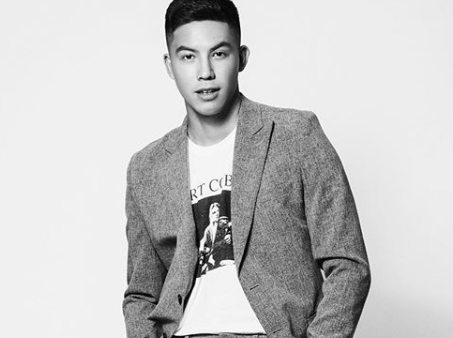 Newbie actor Tony Labrusca is extremely proud of his debut film, “ML” (short for “martial law”) not only because it’s an official entry to the popular Cinemalaya Film Festival 2018, but because he shares a “co-lead role” with legendary and iconic actor Eddie Garcia.

What can Labrusca say about working with Garcia?

“He’s the man, he’s a legend. The fact that I was able to work with him, I’m such a new actor, it was such a humbling experience for me, and I have to admit, I was very intimidated,” he said at the press conference for the movie, Monday.

“I stepped in there (on the set), not knowing what will gonna happen, how our relationship [will] be like, but it was really humbling and I learned a lot,” he added.

“This is an experience that I will always tell people one day when I grow up, that ‘I did a movie with Eddie Garcia!’” said Labrusca.

How did he prepare for his role?

“I’m a new actor, so I prepared by going through the script with Direk Benedict Mique and really evaluating every scene. He was always there for me, guiding me. That’s how we prepared.”

“We had a really symbiotic relationship, kasi (because), I couldn’t do any other scenes without him, and obviously, I’m his main actor, and so we definitely helped each other out. I’m really blessed that he chose and trusted a new actor like me. So, we just prepared by working through it together.”

“Direk Benedict just made us watch videos, ‘coz there are certain scenes that we needed to feel, like the horrible things that happened to people.”

What was his realization after doing the film?

“I think my realization now is that, you just have to [have] an open mind. [It’s because] I’m not really a political person.

“But I think, after watching this movie, it’s just good to be very aware about your surroundings. I think, that’s the biggest thing. More than people taking sides, or to be aggressive or inactive, I think it’s just about knowing your surroundings, being more aware and just educating yourself.”

How was the overall experience doing his very first independent film in a co-lead role with Eddie Garcia?

“I love it! I love it so much. It’s a completely different vibe.”

“I wanna encourage everybody out there, that if you’re an aspiring actor, and you think that mainstream is the only way to make it, I think it’s important that you give indie a shot, and you’ll realize a whole new respect for the art!” said Labrusca.