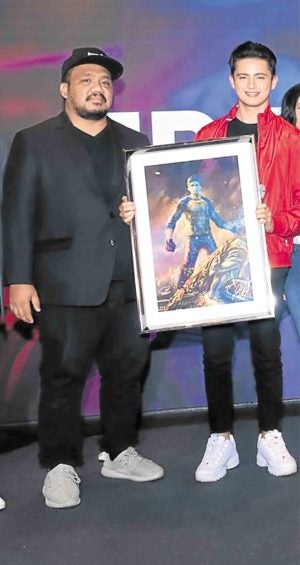 Almost a year after making a huge splash with his Cinemalaya debut film “Respeto,” filmmaker Treb Monteras II crosses over to the mainstream with a well-loved komiks classic, “Pedro Penduko.”

The fantasy caper, which was created by National Artist for Literature Francisco V. Coching, will get a millennial makeover in this new adaptation, produced by Viva, Epik Studios and Cignal, with heartthrob James Reid as the titular hero.

The iconic character has had several incarnations through the years, with Ramon Zamora and Janno Gibbs playing Pedro Penduko on the big screen and Matt Evans on the boob tube.

It is precisely its enduring cinematic mythology that has attracted the indie director to the material.

“It has a rich history and strong following, and I think this is a great opportunity to inform people about what’s happening in our society,” the director told the Inquirer.

For Monteras, the “Penduko” revival couldn’t have arrived at a better time. “There is so much violence in our country. The nation is divided. We need a hero to save us. Hopefully, a character like Pedro Penduko will remind us of what being a good Filipino is.”

Of the previous iterations of the legend, Monteras had only seen the 2000 movie directed by Erik Matti, “Pedro Penduko, Episode II: The Return of the Comeback.”

Monteras vowed that his film “will be more serious,” compared to previous editions.

He explained: “We are combining some elements from the Francisco V. Coching original with the current adaptation by Epik Studios—to remain true to the comics tradition. This film will also introduce new characters and will be set in the city.”

Since a pulsating urban soundscape and colorfully gritty landscape were the strongest suits of “Respeto,” can audiences expect the same ultramodish treatment for this rebooted “Penduko”?

While Monteras plugged into lead star Abra’s hip-hop world in “Respeto,” will Reid’s unique sound also play a crucial role in the narrative?

It’s “coincidental” that he’s working with actor-musicians back-to-back, he insisted. “But I think it’s also intentional because the producers got me for this movie after they saw ‘Respeto.’”

Moreover, the new “Penduko” will have “a musical element, and James will be heavily involved in producing the soundtrack.”

He is looking forward to collaborating with Reid. “This is our first time to work together. I’m so excited because when I met him to discuss my plans for the film, I could sense that he’s really committed to this project.”

Although it’s his first time to make a mainstream flick, he surmises that the process would be similar to indie filmmaking. “When I prepare for projects, I just read lots of books, look at paintings and artworks for inspiration and immerse myself in the milieu.”

Needless to say, his indie roots primed him well for future challenges.

“Indie filmmaking is very difficult when you don’t have a financier. You have to do everything yourself, and I mean that literally and figuratively. Good thing I have friends who helped out to make my first film possible,” he related.

Cinemalaya was like a master class, in more ways than one.

“It taught me not to focus on finding money for my film, but instead finding stories that I am really passionate about,” Monteras asserted.