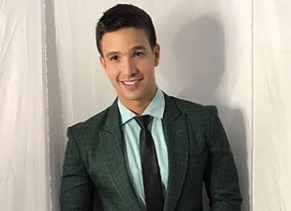 Kapamilya hunk singer Markki Stroem is set to delight his fans as he guests on Inquirer ShowbizLive on Wednesday, July 4.

Although not too visible on television, Stroem however is juggling three movies as of present. He is part of “I Love You Hater” top-billed by Joshua Garcia and Julia Barretto, “Paano Ako Naging Lady” which used to be a stage play in which he had also been a cast and “Tres”, a movie by the Revilla brothers Jolo and Bryan.

Stroem rose to fame when he joined “Pilipinas Got Talent” in its first season. The Filipino-Norwegian actor finished his school in Switzerland but established a career in showbiz in the Philippines.

A theater actor himself, he has done stage plays such as “Camp Rock the Musical” and “Kung Paano Ako Naging Leading Lady” among others. He also starred in a few movies such as “Raketeros”, “10,000 Hours” and “Ang Hapis at Himagsik ni Hermano Puli.”  /muf

Read Next
Anne Curtis collects spare change from plane passengers, shuts down critics who say it’s for ‘publicity’
EDITORS' PICK
Metro Manila posts lowest temperature yet this ‘amihan’ season at 19°C
Over 3 Million worth of prizes to be won at Smart Padala’s SENDali Manalo Promo!
Acer starts the year off strong with the Aspire Vero National Geographic Edition
DOH: 28,471 new COVID-19 cases in PH; active cases now 284,458
On Day 2 of implementation, gov’t says workers now exempt from ‘no vax, no ride’ policy
Gear up and get ready to play with Yamaha Mio Gear
MOST READ
Emma Stone calls Andrew Garfield a ‘jerk’ after he ‘lied’ about his ‘Spider-Man: No Way Home’ appearance
LOOK: Edu Manzano, Cherry Pie Picache enjoy Palawan with her son Nio Tria
Unvaccinated has rights but it has limits—DOJ
Retirements prompting major reshuffle in PH military
Follow @CAbanillaINQ on Twitter
Don't miss out on the latest news and information.