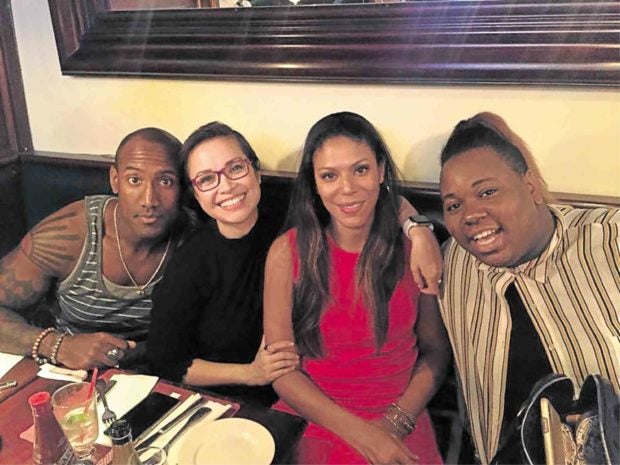 NEW YORK—At the half-hour call before my final performance on “Once on This Island,” I asked our stage manager Justin Scribner to play a song over the loudspeaker: “One Last Time,” from the Lin-Manuel Miranda-penned Broadway musical, “Hamilton.” The lyrics of the first chorus go as follows: “One last time/Relax, have a drink with me/Let’s take a break tonight/And then we’ll teach them how to say goodbye/You and I.”

The character of George Washington sings those words, and since I share my birthday with this founding father, it felt right to borrow the song to bid my comrades in the sandbox farewell.

For the past two weeks I had been gearing up for the inevitable. Clearing out the space in the dressing room I share with the actor playing Papa Ge (when I started the process, it was Tamyra Gray; by the time I was done, Merle Dandridge had made her return), compiling cards received and taking them home to be put away, and throwing away what I know I didn’t need.

By the time last Sunday night had rolled around, all that was left was my makeup. Everything else slowly disappeared, and bag by bag was brought home for storage. I knew that my last day on the “Island” would be quite an emotional one, so I wanted to take care of as much things as I needed to, so I could just bathe in the company of my “Island” family.

As expected, it was a heightened, emotional day.

The matinee was uneventful, what with a few understudies taking over a couple of principal roles (Aurelia Williams was Asaka, and Cicily Daniels played Mama Euralie) and a swing or two. The show went as it normally does, and once it had ended, I put on my pajamas, had my dinner and headed to my final physical therapy session with our PT guru Vitaly Dvoskin.

The sand can be brutal on my feet and hips, and my headdress does a number on my neck from time to time. Vitaly is a miracle worker, and he gets us back up and running on the sand in no time.

At the half-hour call before Sunday’s second show, most of the whole company assembled in front of the stage manager’s office to sing “Happy Trails.” After that, I gave a speech expressing how grateful and blessed I was to have been a part of this wonderful production. Then, everyone headed to dressing rooms to get ready for the show.

This was going to be special as there were friends, both old and new, who came to watch my last performance. Every time I looked out into the audience for the preshow, I caught the eye of someone special to me.

For this last night, once I saw the two Genie covers from the musical “Aladdin,” Deonté Warren and Juwan Crawley, I felt that they would be the right pair to get “mosquito netted.” Once that was done, I found a moment to breathe and prepare for the formal start. At this performance, we had a full company.

It was a very tearful, emotionally charged show. I would try to catch the eye of everyone I shared space with, and everyone would try to catch my eye and share a little moment with me. I found myself weeping along with Kenita Miller during “Ti Moune,” and at the end of “Human Heart,” when the little girl, Emerson David, wrapped her arms around me, tighter than she ever had before.

Our audience was so generous, and I allowed myself to take it all in. At the curtain call, we bowed, hugged, bowed and hugged some more.

I was only too blessed to be in a company that loves hard and loves fully. From the very first rehearsal, to be enveloped in the sound this cast of actors makes is something that can only be described as divine. To be wrapped in that for nearly eight months is beyond anything I could’ve imagined, so leaving it wasn’t going to be an easy task.

I love these people with my whole heart. They’re my family.

But now, the show moves on without me. If I helped to set it up right, then it’ll run like a machine, and my presence, although missed, will not be required. However, I shall always and forever take this island and its inhabitants with me everywhere I go, and I know that whatever happens, they will have my back, and I will have theirs.

To the cast and crew of “Once on This Island,” to say thank you doesn’t feel like it’s enough. To our director Michael Arden, thank you for the phone call, and for asking me to answer the call to be a part of this adventure.

To our producers led by Ken Davenport and Hunter Arnold, this has been such a thrill. And lastly, to our audiences, thank you for paying the island a visit. If you have emerged changed, then we have done our jobs right.

This Erzulie is signing off, with a full and happy human heart.

TAGS: Backstory, Entertainment, news, Once on This Island